IIUSA Elects New Leadership to Board of Directors 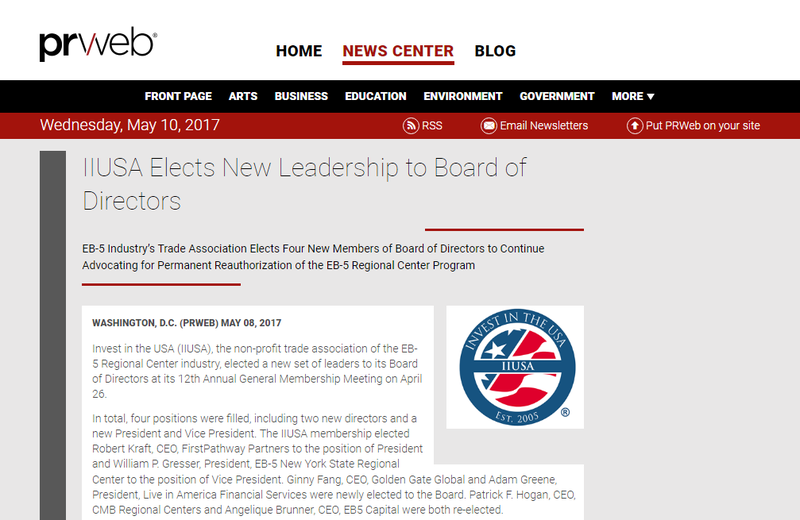 Invest in the USA (IIUSA), the non-profit trade association of the EB-5 Regional Center industry, elected a new set of leaders to its Board of Directors at its 12th Annual General Membership Meeting on April 26.

“I am honored to be elected as the new President of IIUSA to lead our industry into the next era of EB-5,” said Robert Kraft, CEO of FirstPathway Partners. Kraft, a member of IIUSA since 2007 and a successful entrepreneur for over 40 years, bringing investment and development to the State of Wisconsin, was elected unanimously. “Our members consist of hundreds of ambitious and intelligent stakeholders of this industry and I am committed to leading them to a long-term reauthorization so we can all continue to deliver jobs and economic development to our communities.”

President Emeritus K. David Anderson said, “Serving as IIUSA’s President for the last 7 years has been and honor and a privilege. I am proud of the growth in both the organization and the industry we achieved during my time in office and I am confident in the new perspective Robert Kraft will bring for the future of EB-5.”

With the EB-5 Regional Center Program extended to September 30, 2017, IIUSA looks forward to the opportunity to achieve a legislative solution for a long-term reauthorization before any regulatory changes are implemented. American workers and local developers depend on EB-5 as a vital source of capital, which is why IIUSA is collaborating with government and industry stakeholders to shape the program into an even better economic development tool. IIUSA is confident that if it works together with these groups, the organization and the industry will achieve a thriving future.