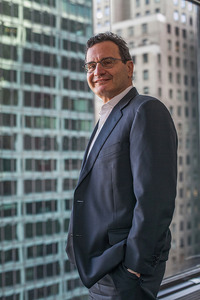 Mr. Rosenfeld founded CanAm in 1987 in response to the newly created Canadian Business Immigration Investor Program and was actively involved, originally focusing his sales efforts in the Canadian market. Actively involved in structuring and promoting private and government syndicates pursuant to the Canadian Program, CanAm eventually became the exclusive promoter of the Provinces of Prince Edward Island and New Brunswick.

Since 2002, Mr. Rosenfeld has established CanAm’s presence in the United States, where it has become a leader in the U.S. EB-5 Immigrant Investor Program. Through Mr. Rosenfeld’s vision and leadership, CanAm has become the exclusive sponsor of four regional centers designated by the United States Customs and Immigration Service, including the City of Philadelphia, the Commonwealth of Pennsylvania, the State of Hawaii and the City of Los Angeles.

Mr. Rosenfeld began his career at Price Waterhouse (currently PricewaterhouseCoopers) in Philadelphia, where he had income tax and audit responsibilities for major clients, and authored a number of the firm's educational publications. In 1983, Mr. Rosenfeld left Price Waterhouse to become a partner at a New York-based real estate syndication firm, where he remained until founding CanAm Enterprises in 1987.

Mr. Rosenfeld is an attorney and certified public accountant. He earned both a Bachelor’s degree in Business Administration and Juris Doctorate from Temple University in Philadelphia.