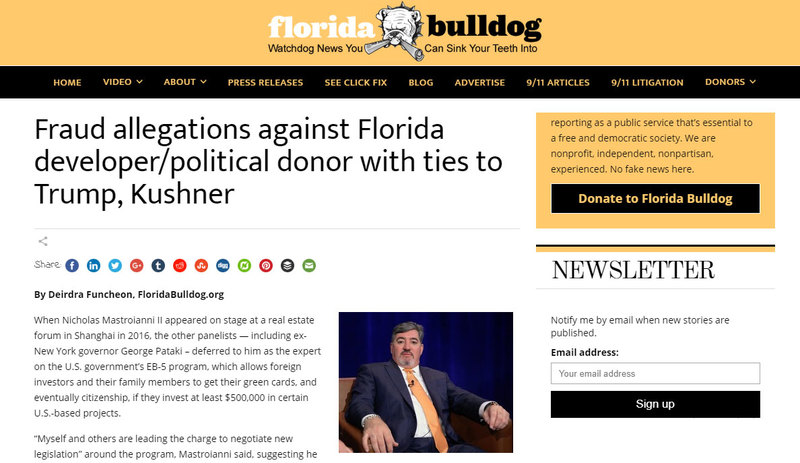 When Nicholas Mastroianni II appeared on stage at a real estate forum in Shanghai in 2016, the other panelists — including ex-New York governor George Pataki – deferred to him as the expert on the U.S. government’s EB-5 program, which allows foreign investors and their family members to get their green cards, and eventually citizenship, if they invest at least $500,000 in certain U.S.-based projects.

“Myself and others are leading the charge to negotiate new legislation” around the program, Mastroianni said, suggesting he had the power to influence the terms as the program repeatedly gets reauthorized for short periods of time.

On the stage, Scott Alper, president and CEO of New York-based developer Witkoff, vouched for Mastroianni’s company, U.S. Immigration Fund, a “regional center” that connects investors with projects. “They’ve had 100 percent hit record with us,” Alper said. “They’ve always raised the exact amount of money we agreed to raise with the project in a very favorable time frame.”

Mastroianni touted the EB-5 program but warned: “Whenever there’s money involved, people have the opportunity to commit fraud and misrepresent what they’re selling.”

Now, Mastroianni is the one being accused of fraud. In a civil lawsuit filed Oct. 11 in Palm Beach County, 78 Chinese investors allege that the Jupiter-based developer misled their group into loaning $99.5 million. Instead of repaying them, he converted their interest to equity and put them in a position where they could be wiped out, their attorney said. Mastroianni has made millions through his use of the EB-5 program, and has ties to President Donald Trump and son-in-law Jared Kushner. Mastroianni is also a significant political donor.

In creating Harbourside Place — a waterfront shopping complex with a hotel and marina in Jupiter — Mastroianni effectively controlled every piece of the development puzzle: He ran the U.S. Immigration Fund regional center. He and a partner owned the land on which the project would be built. He led the partnership with the foreign investors, whose money then bought the land and funded project construction. He was the developer in charge of getting it built.

‘Fraud from the beginning’

“It was fraud from the beginning,” said Marcelo Diaz-Cortes, an attorney with Miami-based Levine Kellogg Lehman Schneider + Grossman, which is representing the 78 Chinese investors. “They structured this deal in a way they could effectively disregard [the investors’ interests] and face no consequences for their actions and misrepresentations.” In a statement, a Harbourside Place spokesperson said “the allegations are baseless, factually incorrect and totally ignore the economics and legal structure of the Harbourside investment. We intend to prevail in court against these plaintiffs and to continue to work with the majority of investors in Harbourside who did not sue.” There were 199 investors in total.

The spokesperson said that 100 percent of the capital invested by all EB-5 investors was properly used in the project, and reports provided to the United States Citizenship and Immigration Services (USCIS) would confirm that. The statement said the developer invested $34 million in the project, and that “all investors have been, and continue to be, paid interest and their investment remains superior to the developers equity.”

The EB-5 program allows foreigners to invest $1million toward a qualified project that creates at least 10 jobs per investor, and in exchange, get green cards and eventually citizenship for themselves plus family members. After the 2008 housing crash and Great Recession, banks steeply curtailed lending, so developers turned to the EB-5 program.

The required investment amount drops to $500,000 if the qualified investment is in a “targeted employment area” (TEA) where jobs are needed. Developers including the Kushners have been criticized for essentially gerrymandering these areas so that affluent areas are technically designated as TEAs. Mastroianni’s Jupiter project qualified as being in a TEA.

A 2014 profile in Fortune called Mastroianni “the hottest money-raiser in America’s visa-for-sale program.” In four years, he had become a major figure in financing multimillion-dollar New York projects such as Atlantic Yards, renovation of the Nassau Coliseum, and various hotel and condo projects. He had rounded up $1.4 billion in EB-5 money over a few years while the program in its entirety collected about $1.8 billion per year.

Fortune revealed that Mastroianni also had tangles with the law — including four arrests for drug possession, a personal bankruptcy and foreclosures. He also faced lawsuits from people he’d done business with over missed payments and shoddy construction.

But as Mastroianni became adept at doing EB-5 deals, his business boomed. Published reports say that he hired Washington lobbyists to call for expanding the EB-5 program, hired a GOP fundraiser, Charles Gargano, and even recruited golf legend Jack Nicklaus to help pitch one of his projects during a seminar in China. When he feared that the government might get stricter about which areas qualified as TEAs, Mastroianni hiredTrump’s longtime lawyer Michael Cohen.

A story in Reveal said that Jared Kushner “for years relied on Mastroianni’s help selling golden visas.” They raised $50 million in Chinese money for the Trump Bay Street apartments in Jersey City, and more for another project there, 1 Journal Square. Mastroianni also became a significant political donor. According to Federal Election Commission filings, Mastroianni and his son, Nicholas Mastroianni III (who works with him), gave more than $350,000 since 2017, including $150,000 to the Trump Victory Political Action Committee and $91,000 to the Republican National Committee.

The lawsuit explains that, for the Harbourside Place project, Chinese firms were used to recruit potential investors — people whose net worth was over $1 million (not counting their residence), or earned more than $200,000 per year ($300,000 with a spouse). These investors were shown offering documents explaining that they would be buying a unit in a limited partnership.

“The investment in the Partnership contemplated herein is a speculative investment and involves substantial risks, including the potential loss of the Subscriber’s entire investment,” the documents say.

The documents disclosed that various Mastroianni-controlled entities were intertwined, and explained that day-to-day operations would be run by Harbourside Funding GP, a limited liability company owned by Mastroianni II and New York attorney Richard L. Yellen. A Boca Raton-based attorney, R. Bowen Gillespie was hired to help manage the entity. (All three men would be named as defendants in the lawsuit. They each declined to comment for this story.)

According to the lawsuit, the Chinese investors loaned their collective $99.5 million with 2 percent interest, and expected that they would have first position in being repaid. Harbourside Place was built — today it includes a Wyndham Grand hotel, shops, restaurants, office space, an outdoor amphitheater, and a marina. Golf legend Tiger Woods opened a flagship restaurant, The Woods Jupiter.

The offering documents explain that if he came up short, Mastroianni could seek outside funding from a senior lender, whose interest in getting repaid would supersede the partnership’s. Attorney Diaz-Cortes said that Mastroianni went to Putnam Bridge Funding to borrow $18 million, and so Putnam assumed first priority. Then, a new senior lender took out Putnam. Mastroianni borrowed more so that the first priority mortgage grew to $65 million.

Diaz-Cortes said that as time passed, “the developer started conceding that the property wasn’t doing so well” and began asking the Chinese investors for extensions on the partnership loan. He was supposed to either repay the loan or convert their interest to common equity, Diaz-Cortes said. “The developer did neither of these options.” Instead, he converted their interest to preferred equity, which does not come with voting rights. Diaz-Cortes calls this “a disguised loan extension.”

“In 2017, alongside the conversion of the partnership loan to preferred equity, another company bought out the loan by” the senior lender, Diaz-Cortes said. “That company is controlled by Mastroianni — Waterway Bridge LLC. We don’t know where he got the funding to be in position to pay off the senior lender, but that’s the position now.”  Now, in this new role as lender, he could foreclose on the property, leaving the partnership – and thus the Chinese investors – with nothing.

Diaz-Cortes’s firm found that in a 2012 subordination agreement, Mastroianni was “committing to Putnam Bridge that he’s only going to come in at $99.5 M.” To the firm, that signaled that “he purposely came one investor short. He boasts of having billions of dollars raised. He’s associated with the Kushners. We think it’s utterly inconceivable he couldn’t come up with one more investor.”

An exhibit in the lawsuit shows that another entity controlled by Mastroianni offered to buy out investors’ interest in the project, with $45,000 down and additional payments every year.  “The offer is brutally one sided,” Diaz-Cortes said, because “upon initial payment of that $45K, he’d be released for any wrongdoing. ‘Once we pay you $45K, we take our partnership interest and you can never have it back even if we breach our contract. And you release everyone imaginable and for anything imaginable he’s done wrong.’” The lawyer said the investors would not be protected if that special purpose entity only paid the initial $45,000, then defaulted on the balance and was dissolved.

The offering documents had laid out potential risks, from financial downturns to bankruptcies, and warned that “no assurance can be given that the Partnership will be profitable or that it will produce the targeted financial returns… There is no guarantee that the Developer will repay all or any part of the Loan, either at maturity or ever, and the Loan is not guaranteed by any third party.”

“Defendants in these kinds of securities frauds always point to those disclosures,” said Diaz-Cortes. “They’re waving a big carrot, and down in fine print, say ‘You should not rely on this.’ There’s no disclosure that ‘We’re defrauding you.’ There’s no disclosure in the offering documents saying, ‘We actually don’t intend on complying with the representations we are making to you.’ … Those disclosures don’t meet the threshold to insulate defendants.”

“Right now the investors have preferred equity shares in the limited partnership, and the partnership has preferred equity in the developer,” Diaz-Cortes said. He said they aren’t sure they will ever be repaid. “What was told to them is that the current cashflow isn’t enough to pay them back as represented.”