Mastroianni to EB-5 Investors: Your Lawsuit Is 'Sham' Capitalizing on Unrelated Fraud Claims 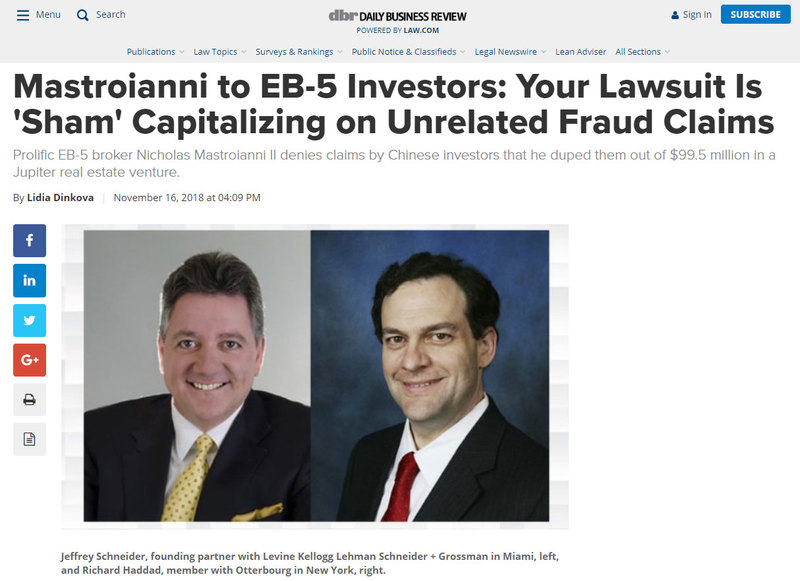 Prolific EB-5 broker Nicholas Mastroianni II denies claims by Chinese investors that he duped them out of $99.5 million in a Jupiter real estate venture.

Developer Nicholas Mastroianni II, an EB-5 investment broker with ties to former Trump lawyer Michael Cohen, is firing back at Chinese investors who accused him of duping them into fronting $99.5 million for a Jupiter project.

Mastroianni rejected investors’ claims as a “sham” after they alleged he structured the deal to his financial benefit and their loss in case the project wasn’t profitable. The plaintiffs expected to ride “a wave of recently publicized fraud in the EB-5 industry” as a way to induce settlement.

Reports of fraud in the EB-5 program, which grants visas to foreigners in exchange for at least a $500,000 investment that creates at least 10 U.S. jobs, have been mounting in South Florida, including the $39 million bankruptcy sale of Fort Lauderdale’s unfinished Las Olas Ocean Resort.

Mastroianni said investors brought up other unrelated cases to “tarnish” him and maintains his Harbourside Place project is different.

Harbourside opened in 2016 with the Wyndham Grand Jupiter as an anchor as well as restaurants and more than 13 shops and boutiques.

The lawsuit claimed Mastroianni told them his goal was to secure $100 million from 200 investors, But if he fell short, he could get a senior loan as long as the total financing didn’t exceed $110 million.

Mastroianni, whose website boasts his U.S. Immigration Fund has secured more than $3 billion in EB-5 investments, intentionally fell short by one investor, according to the Palm Beach Circuit Court complaint. That senior loan grew to $65 million through financial maneuvering.

Mastroianni was the borrower, developer and EB-5 solicitor as well as the lender of some of the funds, cutting down on outside oversight, the investors claim.

Mastroianni’s attorney, Richard Haddad, rejects the allegations that the senior loan was secured behind investors’ backs and other terms were hidden from them.

“The so-called conflict the plaintiffs claim was hidden was in fact disclosed to them in writing before they invested, and the investors thereafter consented in writing to the transactions they now challenge,” said Haddad, who is member at Otterbourg in New York.

Harbourside attracted 116 investors, including 41 plaintiffs, and they signed off on the higher debt, its management and other changes, according to a motion to dismiss filed Nov. 7.

“All the relationships were disclosed in writing in the offering materials,” Haddad added.

While 81 percent of the retail and restaurant space was leased when Harbourside opened, the project still wasn’t profitable enough to repay the principal to investors, according to Haddad’s motion. The slow growth is blamed in part on the growth of e-commerce, and the attorney maintains the investors knowingly put their money “at risk.”

“My clients assumed many risks, but not the risk of fraud or being lied to,” said Schneider, a founding partner at Levine Kellogg Lehman Schneider + Grossman in Miami.

Haddad and Akerman partner David Ackerman in West Palm Beach filed the motion to dismiss on behalf of all defendants except Yellen, the New York attorney. Haddad denied all allegations against Yellen, who ended his affiliation with Harbourside companies in 2014.

As for Mastroianni’s connection to Cohen, a June 11, 2018, CBS News report said Cohen referred Mastroianni to a lobbying firm that allegedly was paying Cohen for referrals when Congress was considering an EB-5 overhaul. The proposed changes failed.