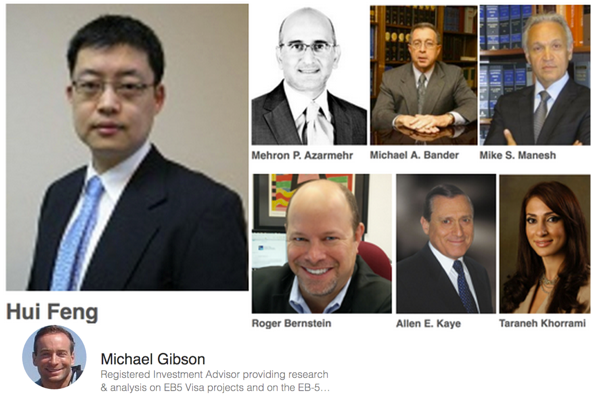 The SEC announced yesterday that it has charged seven U.S. immigration attorneys who specialize in providing services to immigrant investors seeking an EB-5 visa with violating U.S. securities laws by offering EB-5 investments while not registered to act as brokers.

“Individuals and entities performing certain services and receiving commissions must be registered to legally operate as securities brokers if they’re raising money for EB-5 projects,” said Andrew J. Ceresney, Director of the SEC Enforcement Division.  “The lawyers in these cases allegedly received commissions for selling, recommending, and facilitating EB-5 investments, and they are being held accountable for disregarding the relevant securities laws and regulations.”

According to the SEC’s orders instituting settled administrative proceedings against several other lawyers and firms for broker registration violations:

Without admitting or denying the SEC’s findings, the following six individuals and firms agreed to cease and desist from acting as unregistered brokers:

The following is an example of a typical finding in these cases:

A seventh attorney, Hui Feng, chose not to settle and is the subject of SEC litigation in a pending case.  He is reported to have collected nearly $1.2 million in fees already and has contracted to receive another $3.1 million from the various EB-5 Regional Centers that engaged his firm.

Here is the first page of the complaint filed by the SEC against Hui Feng:

The SEC alleges that New York-based immigration attorney Hui Feng and the Law Offices of Feng & Associates not only acted as unregistered brokers by selling EB-5 investments to more than 100 investors, but they also defrauded clients by failing to disclose they received commissions on the investments in breach of their fiduciary and legal duties.  They also allegedly defrauded some entities offering the EB-5 investments.

“We allege that Feng abused his role as an immigration attorney to illicitly operate as a broker and engage in a scheme to secretly receive commissions for selling EB-5 securities,” said Michele Wein Layne, Director of the SEC’s Los Angeles Regional Office.

So a few questions:

1. Regional Centers have been paying immigration attorneys success based fees for as long as the program has been around.  There are probably several hundred who have been paid tens of millions of dollars in fees, so why just make a case after these seven?

2. Do investors/clients have any remedy against these and other attorneys who have taken fees without disclosing them in the event of a loss or harm through their actions?

3. Apart from the alleged violations of securities laws, are there not Bar ethics rules which prohibit this activity?  What implications do these actions have for attorneys who may face disciplinary action for their conduct?

3. What about the Regional Centers (aka the "Promoters") that paid the immigration attorneys these fees?   If the SEC is claiming that securities laws were violated then shouldn't they take action against those Centers?

4. If, as many suspect, the SEC is building their cases against several Regional Centers that paid not only these, but other visa attorney's fees, then what will happen to them once those actions are announced?  Will USCIS terminate the Center's designation for violating securities laws?  If those Centers are terminated, what will happen to all of their investor's petitions?

For those doing EB-5 due diligence for investors it may be prudent to ask the Center they are researching if they have ever made a payment to any of the above individuals, or any other non-registered broker / agent / finder as there is the potential that the next action the SEC takes may be against the Center and Promoters who may have also violated securities laws which could cause the investor both the loss of the petition for residency as well as their capital investment.