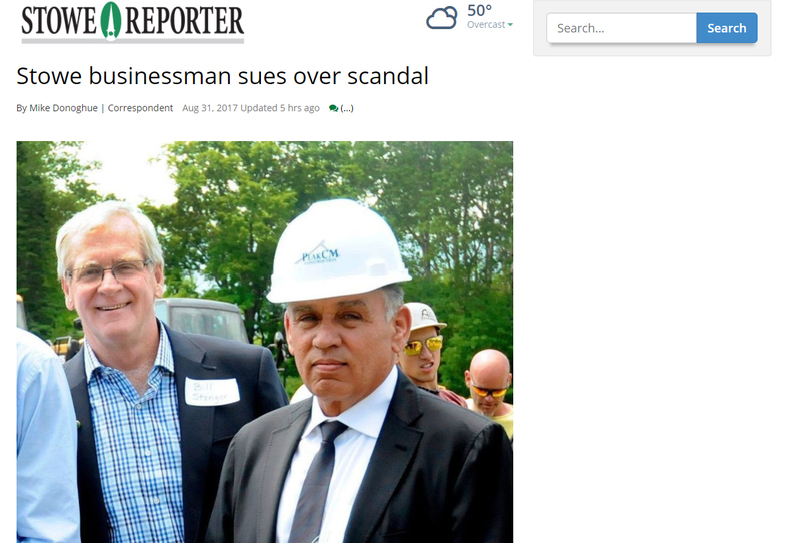 Bill Stenger and Ariel Quiros at a ribbon cutting.

A Stowe businessman who invested more than half a million dollars in Jay Peak expansion in the Northeast Kingdom is suing a Florida law firm and its president for malpractice and breach of contract, according to records in U.S. District Court in Vermont.

Felipe Accioly Vieira filed the civil lawsuit against The Korda Law Firm in Naples, Fla., and its president, Anthony Korda. The lawsuit said the law firm was previously known as Korda, Zitt & Associates.

The lawsuit claims a breach of fair dealing, unjust enrichment by the defendants, consumer fraud and a breach of a fiduciary duty. It also alleges the defendants also made false statements about the investments and also omitted important information.

Vieira’s lawsuit said the defendants held themselves to be experienced EB-5 attorneys with a nationwide presence and “touting a 100 percent success rate” for clients in their EB-5 processes.

However, Vieira maintains his $540,000 investment was not protected.

Vieira is seeking more than $2 million in compensatory, consequential, general and punitive damages, plus restitution from all profits, compensation and benefits the defendants collected. He asked for a jury trial.

Vieira’s lawyers could not be reached for comment. Vieira, a financial analyst, moved his family from Brazil to Vermont in 2013 and invested in townhouses at Jay Peak, according to a New York Times report in May 2016 concerning the federal investigation into the EB-5 project at the resort.

The lawsuit said Vieira had discussions in about February 2012 with then-Jay Peak president and CEO William Stenger about investing in one of the many EB-5 projects at the resort.

Vieira said he later asked for a list of lawyers to consider doing the legal work for the EB-5 application, the lawsuit noted.

“Rather than providing a list, William Stenger directed Mr. Vieira to work with one specific immigration attorney, Anthony Korda. Notably, defendant Korda was an investor that received his permanent green card through investing in Phase 1 of the EB-5 projects at Jay Peak,” the lawsuit said.

Korda promised to assist Vieira, and helped to prepare an application for the Jay Peak Hotel Suites Stateside Project.

At about the same time, issues surfaced between the Vermont Regional Center for the EB-5 projects and Rapid USA Visas — a third-party consulting company that referred prospective investors to Jay Peak, the lawsuit said. Rapid USA Visas said it had lost confidence in the Jay Peak project and how funds were appropriated.

Stenger downplayed the situation and said it was merely a “business dispute,” the lawsuit said. Vieira said he eventually reached James Candido, the then-executive director of the Vermont Regional Center that handled EB-5 projects, to learn more about claims by Jay Peak.

“After multiple emails to James Candido, he finally contacted Mr. Vieira by telephone, which was surprising, as most of their communication had been through email. It appears that James Candido was making all efforts to avoid memorializing his representations to Mr. Vieira,” the lawsuit said.

Candido repeated it was merely a “business dispute,” according to the lawsuit.

Korda still supported Jay Peak and blamed Rapid USA Visas. However, he agreed to work with Vieira on another project, known as Seldon Technologies, that also had been put together by Rapid, court papers show.

Vieira tried to abort the project because of the treatment, including the note, but Korda continued to press on with the claim Jay Peak was a little overwhelmed due to the break-up with Rapid Visa, the lawsuit said.

Stenger continued to pressure Vieira to subscribe to the Jay Peak project, and the resort sent his notice on how to wire his $540,000 investment, the lawsuit said. With the investment deadline approaching, Vieira felt he was losing the chance to live the American dream if he did not sign up, the lawsuit says. He eventually inked the agreement on May 30, 2012.

Within a month, more problems developed, including a delay with the submission of Vieira’s so-called I-526 petition, the lawsuit said.

By April 2016, the mounting suspicions raised by Vieira and Rapid Visas were confirmed when the U.S. Securities and Exchange Commission filed a 52-count fraud lawsuit against the Jay Peak developers, Ariel Quiros and William Stenger, alleging misappropriation of EB-5 investor funds.

A somewhat similar lawsuit was filed in federal court in Burlington earlier this month against a New York lawyer and his firm by three investors from China, who also made substantial investments in a different part of the Jay Peak expansion.

Wei Wang, Guangyi Xiong and Xiaofeng Feng are making various claims, including malpractice and breach of contract, by attorney Jianming Shen and the Shen Law firm, records in U.S. District Court in Burlington show. The plaintiffs say they each invested $550,000 in Phase VII of the project — the Jay Peak Biomedical Research Park in Newport. The facility was never built.