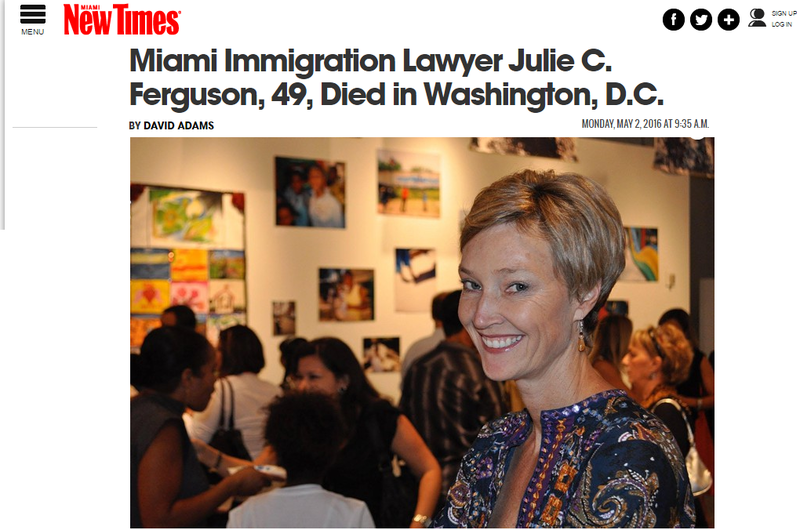 Ferguson was admired among her legal colleagues for her free spirit, kindness, and work ethic. She often took on tough, financially unrewarding cases, and was actively involved in humanitarian causes.

Tall, elegant, and athletic, she made friends everywhere she went — from courthouses and her chiropractor’s office to walks with her dog. Passionate about the outdoors, she liked to paddleboard on Biscayne Bay as well as play tennis twice a week at the Grove Isle Tennis Club.

Sorority sister Elizabeth Butler Pruett says that “her smile transformed a room, and her beaming presence was a magnet to all.”

Ferguson's passionate humanitarianism led to her involvement in numerous charities, including the group Flying High for Haiti, which supports a community school on the poor island of Île-à-Vache. She also volunteered in Cuba with Alternatives to Violence, which works in prisons around the world teaching inmates how to manage conflict in creative and peaceful ways.

Ferguson found her soul mate five years ago when she was hired to represent Oriano Galloni, a talented Italian marble sculptor from Carrara. They were married in a small, intimate ceremony on a catamaran off Miami on a sunny afternoon in September 2013.

The handful of close friends who attended were kept in the dark until the last minute, when a notary declared them husband and wife as they stood smiling at the back of the boat dressed casually in white.
The couple spent their summers together at Galloni’s studio in Carrara, where Ferguson somehow found time to work on her case file while also creating her own art pieces.

Navigating clients through the U.S. immigration legal maze often seemed to be a labor of love for Ferguson, clients recalled on Facebook after learning of her passing.

“Julie was a highly skilled, determined, and compassionate immigration lawyer. She cared deeply about her clients and fought for them relentlessly,” says Roger Bernstein, a fellow immigration attorney. “She was a tenacious litigator and had the special ability to effortlessly take over the courtroom. She excelled in the area of asylum law, successfully advocating for those who had suffered persecution. While some shrunk away from complex litigation, Julie thrived and rose to the challenge.”

Ferguson was a specialist in difficult cases that required waivers of inadmissibility, resulting in her authoring a handbook on the subject that synthesized her many years of experience with strategies, checklists, and practical tips on a variety of waiver applications. The handbook was widely used as a resource by thousands of immigration practitioners.

Most recently, she concentrated on counseling foreign investors who participated in the EB-5 investor visa program, resulting in the creation of hundreds of new jobs. She lectured frequently, was a mentor to many young lawyers, and was widely admired and respected by her colleagues.

Ferguson often worked pro bono, devoting as much energy to clients less fortunate as she did to those who were wealthy. She did not let the discretionary whims of immigration judges get her down. One of her clients — a young Honduran man named Kenny Rivera who fled to Miami in 2002 to escape a violent street gang — was facing deportation after his case was assigned to an elderly judge known to have little sympathy for undocumented Hispanics. Ferguson argued he deserved consideration for political asylum as he claimed to have been forcibly recruited by the gang, tattooed, and threatened with death if he failed to do their bidding. With the help of friends and contacts in Honduras, Ferguson was able to prove his story and win the case.

A native of Michigan, Ferguson graduated from Greenville High School in 1985; DePauw University in Greencastle, Indiana; and the University of Geneva, Switzerland in 1989 with a BA in philosophy and economics. She went on to earn her law degree, as well as a master's in international affairs, from American University. She was admitted to the bar in Florida, New York, and Maryland.

Ferguson died after an accident while attending a conference of IIUSA (Invest in the USA), an advocacy event for the EB-5 investor visa program.

“She will be so very missed, and will be remembered for her kindness, intellect, and leadership,” IIUSA executive director Peter D. Joseph says.

Julie was born in Lake Forest, Illinois, March 15, 1967. She is survived by her Galloni and his parents, Asunta and Eramis Galloni, and brother Claudio. She is also survived by her parents, Roy and Marilyn Ferguson, and brother and sister-in-law Roy and Courtney, as well as their four children, Roy, Saylor, Nautica, and Piper. She was preceded in death by her grandparents Kathryn Genus Gates and Ellsworth Sanders.

In lieu of flowers, the family suggests a contribution to Flying High for Haiti via flyinghighforhaiti.com or Americans for Immigrant Justice at aljustice.org.

A funeral will be held Saturday, May 14, at 10 a.m. at the First Congregational Church in Greenville, Michigan. A celebration of her life will also be held in Miami in early June.