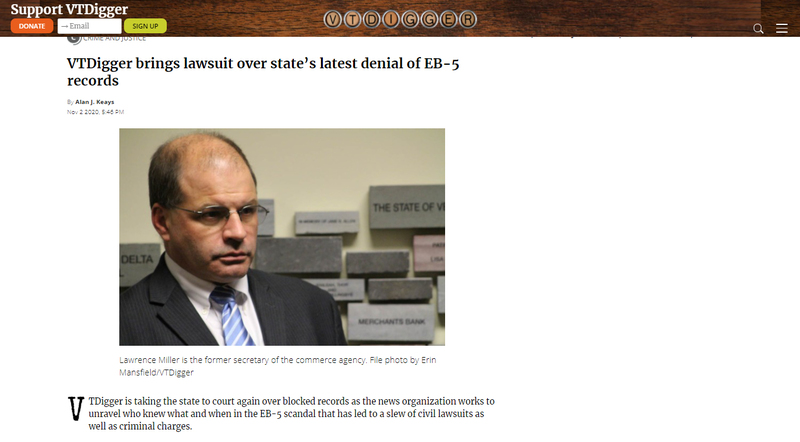 Lawrence Miller is the former secretary of the commerce agency.

VTDigger is taking the state to court again over blocked records as the news organization works to unravel who knew what and when in the EB-5 scandal that has led to a slew of civil lawsuits as well as criminal charges.

This time VTDigger is seeking state documents and communications to find out why the state allowed the now-criminally indicted Jay Peak developers to keep signing up investors in their projects in the face of several allegations of fraud.

The Vermont Journalism Trust, the nonprofit parent organization of VTDigger, filed the lawsuit last week in Washington County Superior civil court against the state Agency of Commerce and Community Development and its secretary, Lindsay Kurrle.

The lawsuit follows a denial by Kurrle and the ACCD in late September of a public records request by the news organization.

The legal action challenges the state’s claim of a “litigation exemption” to the Vermont Public Records Act that it is using to keep the documents under wraps.

The lawsuit calls on Judge Timothy Tomasi to order the state to make public the records tied to Lawrence Miller, former ACCD head, and the operations of the state-run Vermont EB-5 Regional Center his agency was charged with overseeing.

Miller served as commerce secretary from 2011 to 2014, at a time when now-former Jay Peak owner Ariel Quiros and his partner, Bill Stenger, the ski resort’s past CEO and president, were accused of defrauding hundreds of foreign investors in projects they headed.

The news organization, according to the lawsuit, is seeking the records “to uncover details about the State’s inadequate oversight of the EB-5 program” that years later remain unanswered.

“The State of Vermont continues to hide secrets behind narrow exemptions, frustrating the intent and purpose of the state’s public records law,” Dolan said in a statement announcing the lawsuit.

“The EB-5 scandal,” he added, “demonstrates the need to reject broad exemptions to public disclosure and do more to increase transparency in government.”

Charity Clark, chief of staff for Vermont Attorney General TJ Donovan, stated in an email that the office had not yet been served with the lawsuit.

“Unfortunately,” Clark added, “we are not in a position to comment until we have digested the Complaint.” 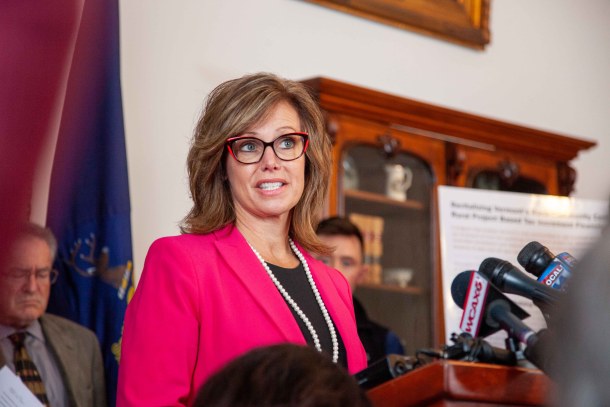 Lindsay Kurrle, Vermont’s secretary of the Agency of Commerce and Community Development.

VTDigger specifically made a request in August seeking under Vermont’s Public Records Act emails from Jan. 1, 2011, and Dec. 31, 2014, related to AnC Bio Vermont, Rapid USA Visas, and a series of other EB-5 financed massive developments at Jay Peak ski resort, including the Hotel Jay.

In addition, the news organization had sought the records of Miller’s communications with Stenger, Rapid USA Visas owner Douglas Hulme, and Alex MacLean, who had served as an aide to then-Gov. Peter Shumlin.

The state is currently facing a civil lawsuit brought by Russell Barr, a Stowe attorney, on behalf of a group of EB-5 investors. Together those investors lost millions and have either been denied or continue to face uncertainty over whether they will ever be allowed to obtain the green cards they had been seeking as a result of their investments.

Barr, in the lawsuit, alleged the state and several of its employees and officials were at best negligent in the oversight of the regional center, and at worst active participants in it.

Foreign investors who put up at least $500,000 in a qualified project through the EB-5 program were entitled to obtain permanent U.S. residency provided their investment led to the creation of at least 10 American jobs.

The Vermont Supreme Court has since taken up the case and issued a ruling last year allowing it to proceed, though tossing out some parts of it. That case is currently in the discovery phase.

“The Vermont Supreme Court dismissed the claims against certain state officials, including Lawrence Miller, due to sovereign and qualified immunity—not a lack of wrongdoing,” VTDigger’s lawsuit filed last week stated.

“Thus,” the public records lawsuit added, “the only way to hold these officials accountable is through the court of public opinion.”

John Kessler, ACCD general counsel, rejected VTDigger’s public records request on Aug. 25, citing the litigation exemption and the ongoing lawsuit brought by Barr against the state. The news organization appealed that denial to ACCD Secretary Kurrle, and it was again rejected.

VTDigger has taken the state to court before seeking access to records connected to the EB-5 program that have led to the release of previously withheld records and in one instance revealed the state was missing certain documents.

“Still missing pieces to this story,” the recent lawsuit stated, “VTDigger narrowed its focus to another set of documents: the Miller emails at issue in this case.”

The purpose of the “litigation exemption” claimed by the state, according to the lawsuit, is to prevent parties in an action from doing an “end run” around the discovery request by submitting a public records request. 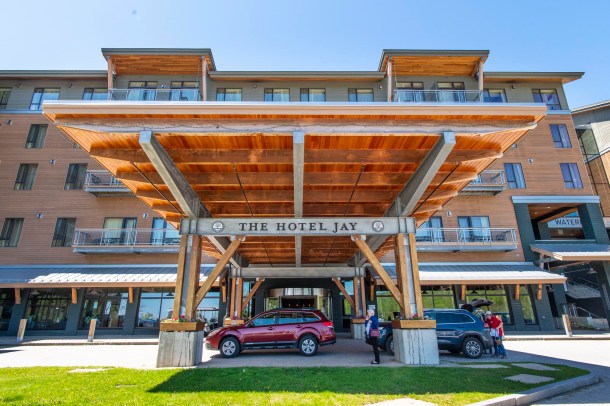 “VTDigger is not a party to any litigation, and thus is not seeking to do an ‘end-run’ around the discovery process,” the lawsuit stated.

“The likelihood of the Sutton case resolving in the near future is unlikely,” the filing added. “If upheld, the exemption would prevent public review and scrutiny of these documents — and the State’s oversight of the EB-5 program — for many months or years to come.”

The 21-page lawsuit traces the work VTDigger has done over the years uncovering the circumstances leading to the largest alleged fraud cases in the history of EB-5 program.

According to the public records lawsuit, Hulme, of Rapid USA Visas, first blew the whistle in 2012 on Quiros and Stenger, alerting others, including 100 immigrant attorneys that Jay Peak’s financials were not sound.

Shumlin later appeared in a 2013 promotional video, which was translated into Chinese, in which he later admitted to falsely claiming that the EB-5 projects were audited by the state.

After the federal regulators brought the securities fraud allegations against the developers in 2016, Shumlin claimed he misspoke in that video.

Also, according to the lawsuit, Brent Raymond has claimed that after he became the director of the state EB-program in June 2012 he repeatedly asked his superior to require audits of the projects, in part, due to the concerns earlier raised by Hulme.

Raymond had also said he raised concerns about another project headed by Quiros and Stenger, AnC Bio Vermont, a proposal to build a $110 million biomedical research facility in Newport.

That project has led to the federal criminal fraud indictment in May 2019 against Stenger and Quiros as well as two of their associates.

Quiros has since pleaded guilty to charges in that case and is awaiting sentencing. Stenger is challenging the allegations and a trial is expected late next year. 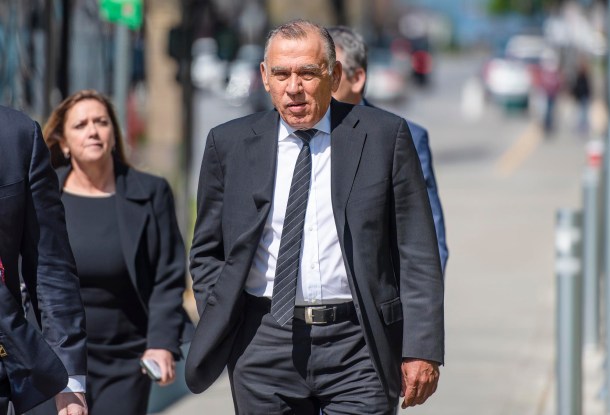 Ariel Quiros arrives outside federal court in Burlington for arraignment.

Those civil actions accused the two developers of misusing $200 million of the more than $450 million they raised through the federal EB-5 immigrant investor program. Those funds were meant to finance several development projects in northern Vermont, including massive upgrades at Jay Peak.

Stenger and Quiros have reached monetary settlements in those lawsuits, with neither admitting or denying wrongdoing.

The U.S. Citizenship and Immigration Services, which administers the federal EB-5 program, also issued a notice of termination for the Vermont EB-5 Regional Center in 2016 and shut down the center a year later.

The federal agency has twice issued statements taking the state to task for failing to stop the fraud and lack of oversight of the Quiros and Stenger project. The state is still challenging that ruling, seeking to allow the EB-5 regional center to remain open.

Meanwhile, it’s not clear if more criminal indictments may be coming down in connection with the EB-5 developments in Vermont.

At a court hearing last month in the criminal case, Assistant U.S. Attorney Paul van de Graaf, a prosecutor in the case, said the investigation into additional suspects remains ongoing without further elaborating.