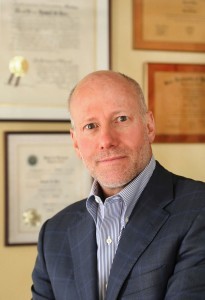 Realizing his passion for Law, Russell then attended Benjamin N. Cardozo School of Law in New York City, earning his Juris Doctor in 1985. He then began his law career at Coopers & Lybrand International Tax Group, honing his skills in international tax law. He also worked within the 40-lawyer Park Avenue law firm of Gilbert, Segall & Young and was a valued team member at the international law firm of Proskauer Rose, where he worked with some of the most talented and brightest lawyers in the world representing large and diverse international and national organizations.

In 1993 Russell and his wife Toni moved to Stowe, Vermont where he opened what is known today as Barr Law Group. With a diverse staff of experienced attorneys and dedicated support personnel, Russell realized his dream to serve the New York City and Vermont communities alike, combining his big city experience with the attention and detail of a small town firm.

Throughout the last 25 years, Russell has represented clients in all aspects of commercial and tort litigation including trials and appeals and has litigated in areas of commercial, real estate, utilities, class actions, personal injury, medical malpractice, insurance coverage and toxic torts. He has had the honor to represent multiple professionals including doctors, lawyers, real estate professionals and various business enterprises in a sundry of delicate regulatory matters with the various Vermont State agencies regulating businesses and professionals. Russell also has the unique skillset to effectively represent Native American Law, including multiple interactions with the National Indian Gaming Commission (NIGC).

His firm has held many of the highest verdicts in their local courthouse for years, taking on small town cases just as well as high profile deals tipping in at over $100 million. This includes a $110,000,000.00 casino and hotel financing for the Saint Regis Mohawk Tribe as well as Vermont resort financings and deals for amounts up to $25,000,000.00 including NY and HUD registrations for real estate sales in New York and Vermont.

If there is one statement that captures Russell’s approach to the practice of law it is: “We just work harder and smarter than the bad guys.”

In the Summer of 2014, Russell did the seemingly impossible: he assembled a committed team from the Agency of Transportation, the Federal Aviation Administration (FAA), the Vermont Governor’s office and some of the most talented aviation professionals in the U.S., to rebuild a valuable but outdated aviation center: Stowe Aviation.

Russell and his wife Toni have three children. As a family, they enjoy skiing in the mountains of Stowe, to sailing together for over 2,000 miles on their sailboat to the French West Indies. Russell has been an avid coach for his kids including football and little league and now enjoys flying with his son.