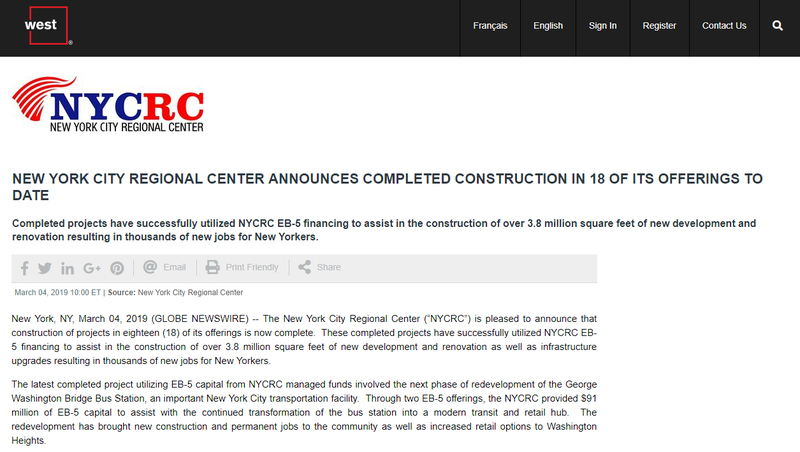 Completed projects have successfully utilized NYCRC EB-5 financing to assist in the construction of over 3.8 million square feet of new development and renovation resulting in thousands of new jobs for New Yorkers.

The New York City Regional Center (“NYCRC”) is pleased to announce that construction of projects in eighteen (18) of its offerings is now complete. These completed projects have successfully utilized NYCRC EB-5 financing to assist in the construction of over 3.8 million square feet of new development and renovation as well as infrastructure upgrades resulting in thousands of new jobs for New Yorkers.

The latest completed project utilizing EB-5 capital from NYCRC managed funds involved the next phase of redevelopment of the George Washington Bridge Bus Station, an important New York City transportation facility. Through two EB-5 offerings, the NYCRC provided $91 million of EB-5 capital to assist with the continued transformation of the bus station into a modern transit and retail hub. The redevelopment has brought new construction and permanent jobs to the community as well as increased retail options to Washington Heights.

Over the past 10 years, the NYCRC has put over $1.5 billion of EB-5 capital to work across a broad spectrum of infrastructure and real estate projects in New York City. Much of this capital has been invested in underserved areas of New York City in need of long-term economic growth. Examples include:

Examples of some of the 18 completed projects utilizing EB-5 capital from NYCRC-managed funds include the following:

“We are pleased to announce that project construction in 18 NYCRC offerings is now complete,” said Paul Levinsohn, NYCRC Managing Principal. “The job creation resulting from millions of square feet of new development and infrastructure improvements is significant and we are proud to have helped finance this effort.”

“Helping secure over 4,600 permanent green cards and over 1,600 I-829 petition approvals are the result of 10 years of hard work on behalf of our investor families,” said George L. Olsen, NYCRC Managing Principal.