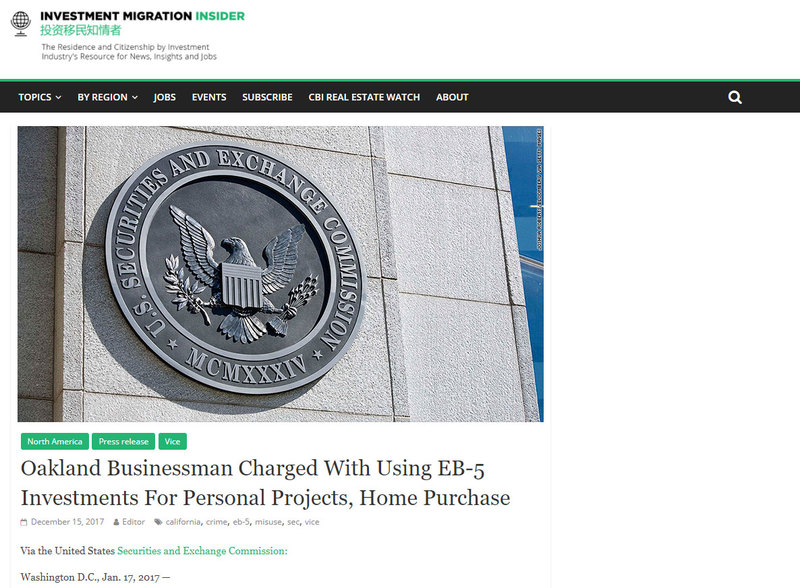 Via the United States Securities and Exchange Commission:

The Securities and Exchange Commission today announced fraud charges against an Oakland, Calif.-based businessman accused of misusing money he raised from investors through the EB-5 immigrant investor program intended to create or preserve jobs for U.S. workers.

The SEC alleges that Thomas M. Henderson and his company San Francisco Regional Center LLC falsely claimed to foreign investors that their $500,000 investments would help create at least 10 jobs within several distinct EB-5 related businesses he created, including a nursing facility, call centers, and a dairy operation. This would qualify the investors for a potential path to permanent U.S. residency through the EB-5 program.

But according to the SEC’s complaint, Henderson jeopardized investors’ residency prospects and combined the $100 million he raised from investors into a general fund from which he allegedly misused at least $9.6 million to purchase his home and personal items and improperly fund several personal business projects such as Bay Area restaurants that were unrelated to the companies he purportedly established to create jobs consistent with EB-5 requirements. According to the SEC’s complaint, Henderson also improperly used $7.5 million of investor money to pay overseas marketing agents, and he shuffled millions of dollars among the EB-5 businesses to obscure his fraudulent scheme.

“We allege that Henderson exploited a program meant to create employment for Americans and abused the trust of investors seeking residency in the U.S.,” said Jina L. Choi, Director of the SEC’s San Francisco Regional Office. “Rather than using investor funds to create jobs and develop communities as promised, Henderson allegedly played a shell game with investor money to buy his home and support personal ventures.”

The SEC is seeking a court order appointing a receiver over San Francisco Regional Center and Henderson’s other businesses involved in the alleged fraud. The SEC’s complaint, filed in U.S. District Court for the Northern District of California, seeks preliminary injunctions as well as disgorgement of ill-gotten gains plus interest, penalties, and other relief.

The SEC’s investigation was conducted by Thomas Eme and Ellen Chen of the San Francisco office and supervised by Steven Buchholz. The litigation will be led by Andrew Hefty and Susan LaMarca. The SEC appreciates the assistance of the U.S. Citizenship and Immigration Services, which administers the EB-5 program.