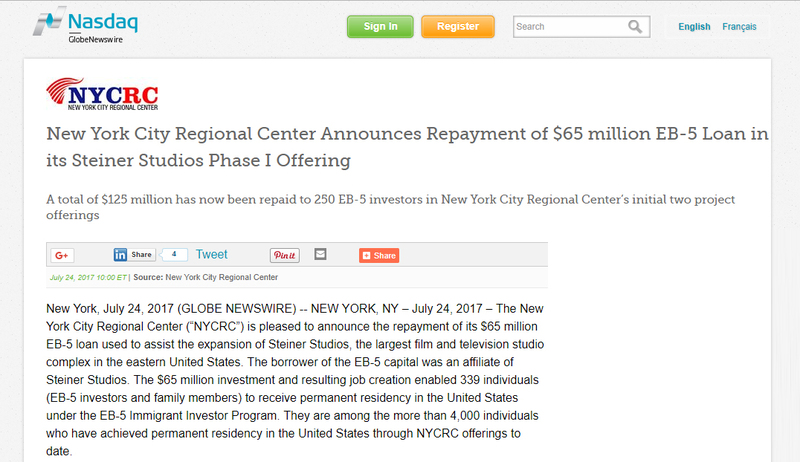 The New York City Regional Center (“NYCRC”) is pleased to announce the repayment of its $65 million EB-5 loan used to assist the expansion of Steiner Studios, the largest film and television studio complex in the eastern United States. The borrower of the EB-5 capital was an affiliate of Steiner Studios. The $65 million investment and resulting job creation enabled 339 individuals (EB-5 investors and family members) to receive permanent residency in the United States under the EB-5 Immigrant Investor Program. They are among the more than 4,000 individuals who have achieved permanent residency in the United States through NYCRC offerings to date.

A total of $125 million has now been repaid to 250 EB-5 investors in NYCRC’s initial two project offerings.

The $65 million of EB-5 capital was used to increase the production capacity of Steiner Studios and further reinforce the Brooklyn Navy Yard as a central location for media production in New York City. The development included the construction of five new television and commercial soundstages totaling 45,000 square feet as well as the renovation of a historic but vacant seven-story 235,000 square foot building into production and support space. The new facilities contain specialized stage and production space to support the increased demand from film and television companies.

Steiner Studios’ 26-acre complex in the Brooklyn Navy Yard opened in 2004 and currently consists of over 580,000 square feet of production facilities. As the film and television sector has grown in New York City, so has the demand for studio and production space. A key element of the City of New York’s plan to support this sector is to foster the construction of additional studio space to help with the ongoing unmet demand for film and television production facilities. In a city where space is at a premium, the construction of studio facilities is necessary for the film and television industry to continue to create new jobs. The NYCRC was selected to provide capital to assist with the continuation of this effort.

"We are very pleased with the repayment of the $65 million loan to the 130 EB-5 investors in this offering,” said Paul Levinsohn, Managing Principal of the NYCRC. “The NYCRC takes seriously our role in spurring job creation and economic development as well as our responsibility to assist our EB-5 investors and their families begin a new life in America. This past week we also announced reaching both the 1,400 I-829 approval and 4,000 permanent green card milestones. Our thanks to Doug Steiner and the entire Steiner Studios team for their professionalism as well as the respect they’ve always shown the EB-5 investors. It is always a pleasure working with them."

"We are proud that our first loan to Steiner has been repaid,” added George L. Olsen, Managing Principal of the NYCRC. “A total of $125 million has now been repaid to 250 EB-5 investors in our initial two offerings. This is a wonderful achievement for the NYCRC and, of course, for our EB-5 investors and their families. We extend our best wishes to them on their continued journey."

The repaid $65 million loan is one of seven NYCRC EB-5 loans totaling $339 million being used for critical projects in the Brooklyn Navy Yard, New York City’s largest industrial park. Since 2010, EB-5 capital from the NYCRC has directly helped implement a broad range of new construction, infrastructure and building improvements, and the renovation of over 1.2 million square feet of vacant and dilapidated buildings.

"The NYCRC has provided hundreds of millions of capital to help the redevelopment of New York City’s largest industrial park and further the Navy Yard’s mission to spur economic development and create new jobs. We are pleased to play a role in this effort," said Mr. Levinsohn.

The NYCRC was approved by the United States Citizenship and Immigration Services in 2008 to secure foreign investment for real estate and infrastructure projects under the EB-5 Immigrant Investor Program. The company was the first EB-5 regional center approved in New York City. To date, the NYCRC has secured over $1.4 billion of capital for 21 economic development projects in Brooklyn, Queens, Manhattan, and the Bronx.