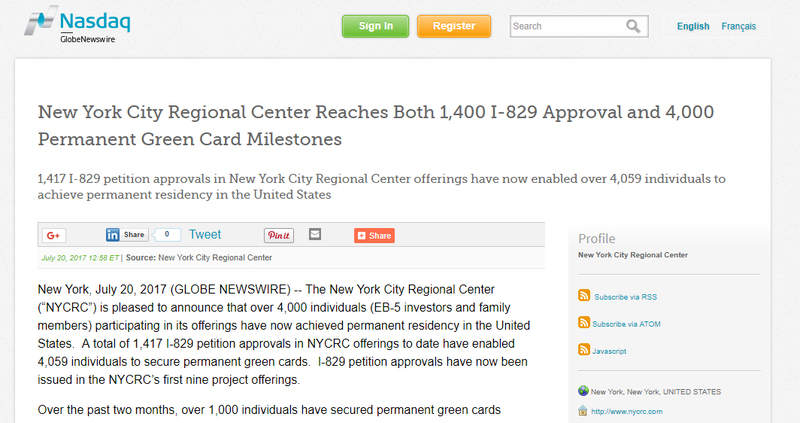 1,417 I-829 petition approvals in New York City Regional Center offerings have now enabled over 4,059 individuals to achieve permanent residency in the United States

The New York City Regional Center (“NYCRC”) is pleased to announce that over 4,000 individuals (EB-5 investors and family members) participating in its offerings have now achieved permanent residency in the United States. A total of 1,417 I-829 petition approvals in NYCRC offerings to date have enabled 4,059 individuals to secure permanent green cards. I-829 petition approvals have now been issued in the NYCRC’s first nine project offerings.

Over the past two months, over 1,000 individuals have secured permanent green cards through NYCRC offerings. Since the beginning of 2017, over 600 I-829 petitions have been approved in NYCRC offerings.

“Achieving over 1,400 I-829 petition approvals and over 4,000 permanent green cards is the result of years of hard work on behalf of our investor families,” said Paul Levinsohn, Managing Principal of the NYCRC. “We know that EB-5 investors and their families put their trust in our ability to help them achieve permanent residency in the United States. We take this responsibility seriously and are proud to announce these new milestones.”

“Since our designation nine years ago, we’ve focused on spurring job creation and economic development in New York City as well as assisting our EB-5 investors and their families begin a new life in America,” added George L. Olsen, Managing Principal of the NYCRC. “Permanent residency for over 4,000 individuals and over 1,400 1-829 approvals are major achievements for our company and, of course, for our EB-5 investors and their families. We extend our best wishes to them on their continued journey in this country.”

The NYCRC was approved by the United States Citizenship and Immigration Services in 2008 to secure foreign investment for real estate and infrastructure projects under the EB-5 Immigrant Investor Program. The company was the first EB-5 regional center approved in New York City. To date, the NYCRC has secured over $1.4 billion of capital for 21 economic development projects in Brooklyn, Queens, Manhattan, and the Bronx. Examples of projects utilizing loans provided by NYCRC-managed funds include the following:

In addition to fueling economic development, NYCRC offerings have enabled over 4,000 individuals to become permanent residents of the United States through the EB-5 Immigrant Investor Program.