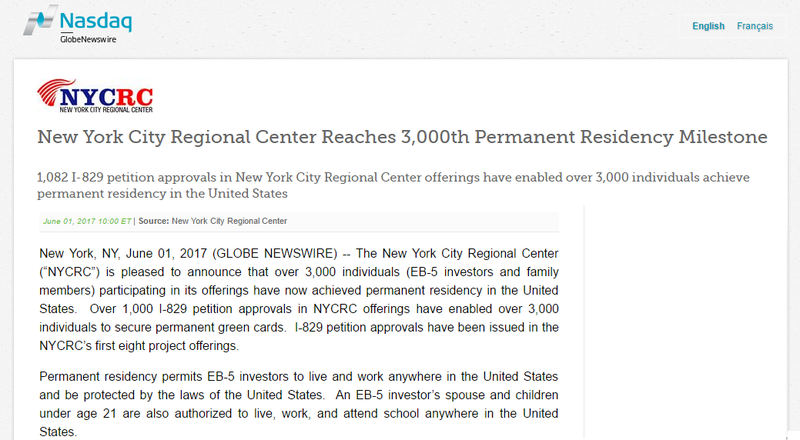 The New York City Regional Center (“NYCRC”) is pleased to announce that over 3,000 individuals (EB-5 investors and family members) participating in its offerings have now achieved permanent residency in the United States.  Over 1,000 I-829 petition approvals in NYCRC offerings have enabled over 3,000 individuals to secure permanent green cards.  I-829 petition approvals have been issued in the NYCRC’s first eight project offerings.

“We are excited to reach the 3,000 permanent residency milestone,” said Paul Levinsohn, Managing Principal of the NYCRC.  “When we started our company in 2008, we knew that EB-5 investors and their families would be putting their trust in our ability to help them achieve permanent residency in the United States.  We take this responsibility seriously.  Achieving over 1,000 I-829 petition approvals and over 3,000 permanent green cards is the culmination of years of hard work on behalf of our investor families.  We extend our best wishes to them on their continued journey in this country.”

“Since our designation nine years ago, we’ve focused on spurring job creation and economic development in New York City as well as assisting our EB-5 investors and their families begin a new life in America,” added George L. Olsen, Managing Principal of the NYCRC.  “Permanent residency for over 3,000 individuals is a major achievement for our company and, of course, for our EB-5 investors and their families.”