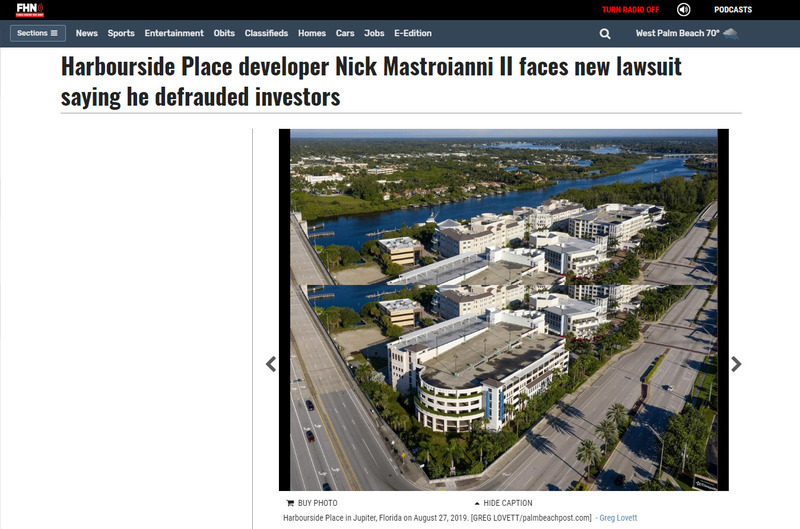 Another lawsuit has been filed accusing Harbourside Place developer Nick Mastroianni II of swindling investors in his waterfront entertainment, shopping and dining project.

The lawsuit, filed Monday in the Southern District of Florida, says Mastroianni, business partner Richard Yellen and others “acted reprehensibly, in blatant violation of the law and public policy” through their handling of investor cash and the Harbourside project.

Two Chinese-born women, Ting Peng and Lin Fu, are identified as plaintiffs on behalf of a larger funding partnership. Ting invested in the Harbourside project in 2013 and now lives in Washington state, while New Jersey resident Lin became a funding partner in 2011.

They were among nearly 200 individuals who each invested $500,000 in the project plus fees, resulting in Harbourside Place’s 2014 opening. Such investors can acquire green cards through the federal EB-5 program, a once-uncommon immigration tool that became more popular during the recent recession.

The suit filed this week says the defendants, which also include Harbourside Place and others, owe investors three times the amount they spent on the project. They have lost at least $500,000 each, the suit says.

It asks for class-action status and accuses Mastroianni and Yellen of breaching Harbourside’s agreement with the EB-5 investors and running what it calls a “fraudulent scheme.”

Among the complaints in the new lawsuit: Rather than paying off a Harbourside-related loan, Mastroianni II instead borrowed more money through a company he formed. This ensured Harbourside “would continue to be saddled with debt while Mastroianni profited from it,” the suit alleges.

He and other defendants also improperly converted immigrants’ cash into investments they had no voting control of, according to the suit.

That claim is similar to one made in another lawsuit accusing Mastroianni of defrauding Harbourside’s EB-5 investors, filed in October 2018.

Dozens of individuals signed onto that suit, which was filed in Palm Beach County’s 15th Circuit Court and remains open. Mastroianni and co-defendants responded to that suit by calling it a “sham pleading” in a 2018 court filing.

“This project was successfully built on-time, more than 2,400 full-time jobs were created for American workers, investors have received green cards for themselves and their immediate family members, 100% of the investors’ capital was invested into the project and used in accordance with U.S. government requirements, and actions were taken pursuant to full disclosure and express consent,” the defendants’ motion says.

A hearing scheduled for January, in that case, was canceled last month because of ongoing settlement negotiations, court documents show.

Matthew Fornaro, a Coral Springs-based attorney representing Ting and Lin in the latest suit, said in an email Wednesday that his case is distinct from the 2018 suit.

Fornaro said he seeks relief for his clients and others who sign on a “contingent-fee basis.” They’re due money because the construction loan their money was supposed to finance matured more than two years ago, he said.

The lawsuit this week is Mastroianni’s latest activity in the federal court system. There also is a lawsuit that Harbourside filed in 2016, accusing Jupiter of violating its constitutional rights by enforcing noise and event regulations.

Harbourside appealed a 2018 U.S. District Court ruling in favor of the town to the 11th Circuit Court of Appeals, where it awaits a decision. Oral arguments were held last month.