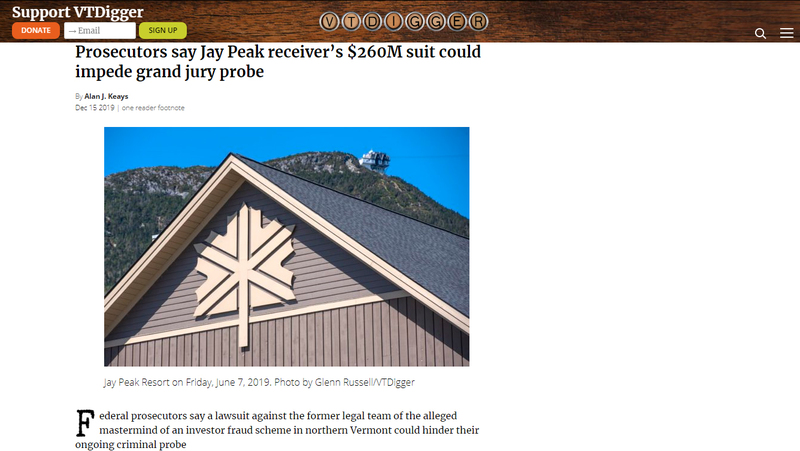 Prosecutors are trying to block the $260 million lawsuit Michael Goldberg, the receiver of Jay Peak, filed earlier this year against Ariel Quiros’ ex-legal team. Goldberg claims those lawyers failed to take steps to stop the alleged investor fraud that has already led to criminal charges against the former Jay Peak owner and three associates.

“Proceedings should be stayed until the resolution of the criminal matter,” a group of federal prosecutors, including U.S. Attorney for Vermont Christina Nolan, wrote in a filing this week.

“Specifically,” the filing stated, “proceedings should be stayed for eleven months, the approximate length of time until the criminal trial has concluded, or until the criminal matter is otherwise resolved, if it is resolved prior to trial.”

The U.S. Attorney’s office brought criminal charges against Quiros and Bill Stenger, Jay Peak’s former president and CEO, as well as William Kelly, described as a key advisor to Quiros, in May. All pleaded not guilty.

The indictment accuses the men of fraud and making false statements to the government regarding a failed $110 million biomedical research center, AnC Bio Vermont, proposed for Newport.

A fourth defendant, Jong Weon (Alex) Choi, the operator of AnC Bio Korea, is “at large,” according to federal prosecutors.

The criminal case is set for trial in October and is expected to run over a month.

According to Goldberg’s lawsuit, Gordon and the firm were aware that “Quiros had directed the commingling of tens of millions in investor funds among the projects’ various phases and entities in an effort to cover construction shortfalls.”

Attorneys for Gordon and the MSK law firm have recently filed their own motion denying the allegations and seeking to have the lawsuit thrown out.

Quiros fired Gordon and other members of his legal team in March 2017, claiming he was not happy with their representation and they had overbilled for their services.

Goldberg, as receiver, manages many of Quiros’ assets tied to the fraud allegations against him, including Jay Peak and Burke Mountain ski resorts.

The criminal case and ongoing grand jury investigation into the investor fraud scandal in Vermont’s Northeast Kingdom will be “detrimentally impacted” if the receiver’s lawsuit is permitted to proceed at this time, Nolan and other federal prosecutors wrote in the recent filing.

Federal prosecutors have been tightlipped about the criminal probe for years, breaking their silence this spring at a press conference in Newport to announce the filing of charges against the AnC Bio developers.

At the time, prosecutors said the criminal investigation remained ongoing, but no additional charges have been brought against any other defendants.

Many past and present state officials, including those at the highest level of Vermont’s government, from past governors James Douglas and Peter Shumlin, to current U.S. Sen. Patrick Leahy have been tied to the investor fraud scandal due to their strong support of the state’s EB-5 program and backing of the projects headed by Quiros and Stenger over the years.

The filing submitted this week seeking to stay Goldberg’s lawsuit stated that Assistant U.S. Attorney Paul van de Graaf, who is prosecuting the criminal case in Vermont, will be submitting a “declaration” further explaining how allowing the civil lawsuit to proceed would hurt the criminal prosecution.

“(D)ue to the sensitive and nonpublic information pertaining to an ongoing grand jury investigation contained in the declaration,” the filing stated, “the government requests that it be maintained as an ex parte and under seal submission.”

It is unclear if that filing has been submitted to the court. Goldberg’s lawsuit is pending in federal court in Miami, where Quiros resides.

Judge Marcia Cooke, who is presiding in the civil lawsuit brought by Goldberg, hadn’t ruled as of Friday afternoon on the filing by federal prosecutors seeking to delay that case from proceeding.

The filing from the federal prosecutors stated that Goldberg as well as attorneys for Quiros’ former legal team did not object to the stay in the proceeding to allow the criminal case to take precedent.

The federal prosecutors, including Nolan, through a spokesperson, declined Friday to comment on the filing.

Jeffrey Schneider of the Miami, Florida-based firm, Levine Kellogg Lehman Schneider + Grossman, who is representing Goldberg in the lawsuit, could not be reached Friday for comment.

The state and the U.S. Securities and Exchange Commission brought their civil actions more than three years ago against Quiros and Stenger. Those lawsuits, which have since reached monetary settlements, accused the two men of misusing $200 million of the more than $350 million they raised through the EB-5 immigrant investor program.

That money was raised over nearly a decade for a series of projects in northern Vermont headed by Quiros and Stenger, including massive upgrades at Jay Peak ski resorts.