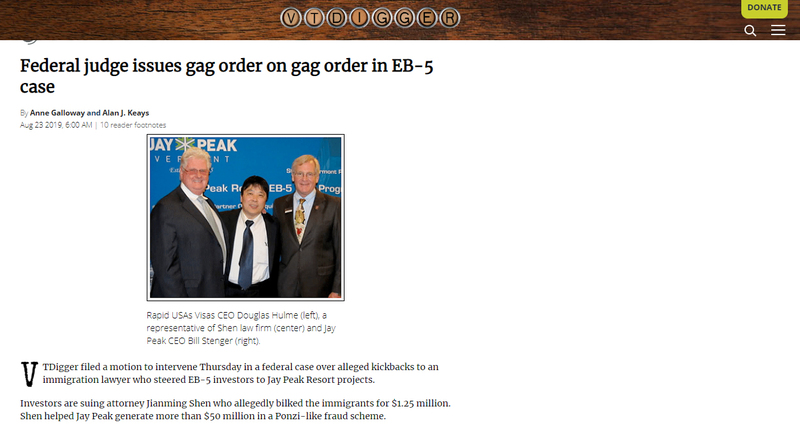 VTDigger filed a motion to intervene Thursday in a federal case over alleged kickbacks to an immigration lawyer who steered EB-5 investors to Jay Peak Resort projects.

The news organization is seeking to unseal a confidentiality order issued by U.S. District Court Judge Christina Reiss on Monday.

The sealed document specifically relates to an upcoming deposition of Nicholas Hulme, a key player who worked with Shen and solicited foreign investors in the Jay Peak projects.

The judge has ruled that the deposition, too, will be under seal.

Because Reiss put a gag order on the gag order there is no public record of her reasoning for sealing the deposition and documents related to Hulme and his father, Douglas Hulme.

VTDigger reporter Alan Keays filed a motion to intervene Thursday arguing that sealing the document “prevents the news organization from reporting on the reasons cited for keeping information regarding the upcoming deposition of Nicholas Hulme shielded from public view.”

“The order was sealed without any justification, and it is difficult to imagine why the public should be denied access to a judge’s own order in a proceeding,” Keays wrote. “Open access to court proceedings, filings, and orders issued by judges enables the public to review and have confidence in the judicial process.”

Keays also argued that VTDigger has reported on many cases related to the ongoing EB-5 investor fraud scandal in Vermont, and this is the first time the news organization has encountered a “confidentiality order” preventing access to an order issued by a judge.

VTDigger first began reporting on the fraud at Jay Peak Resort in 2014, nearly two years before the Securities and Exchange Commission brought 52 counts of securities fraud against the developers, Ariel Quiros, and Bill Stenger, accusing them of misusing $200 million.

Last year Stenger and Quiros pleaded no contest to civil charges of defrauding more than 800 foreign investors in a Ponzi-like development scheme at the ski area on the Canadian border.

In May, a federal grand jury indicted Quiros and Stenger and two conspirators for wire fraud and concealing the truth about a fraudulent company in Korea that the developers proposed to replicate. The two men used plans for a carbon copy of the biomedical facility to lure 169 investors into AnC Bio Vermont, a bogus version of the project that was to be built in Newport.

As part of the Ponzi scheme, Stenger paid more than 100 immigration attorneys $5 million to vouch for the Jay Peak projects.

One of those attorneys is Jianming Shen. Investors accuse Shen of steering more than 100 immigrant investors he represented into the AnC Bio project in exchange for payments from the Jay Peak developers. Each investor paid Jay Peak $500,000 for the proposed biomedical facility, which was never built.

There are a handful of cases against other lawyers linked to Jay Peak, including Anthony Korda, Ed Carroll, Mark Scribner, and John Roth.

Reiss shot down a bid by attorney Russell Barr, who is suing on behalf of investors, to certify a class-action lawsuit against all the attorneys accused of taking kickbacks.

Barr has sought to depose Douglas and Nicholas Hulme because they worked closely with Shen.

Douglas Hulme is purported to be the whistleblower in the SEC case and has long evaded questions from the press. He has also dodged subpoenas for depositions in the Shen case. His attorney has told the court earlier this month that he fears for his life because Quiros has threatened to kill him.

Douglas and Nicholas Hulme ran Rapid Visa USA, a firm that solicited investors for Jay Peak from 2006 to 2012, and made about $15 million for services rendered. Douglas Hulme broke off the arrangement in February 2012 when he sent a letter to more than 100 EB-5 immigration attorneys announcing that he no longer had faith in financial representations made by Quiros and Stenger.

In response to Hulme’s allegation, James Candido, the former head of the Vermont EB-5 Regional Center, “took a closer look” at Jay Peak and determined that “there was nothing out of the ordinary.”

The fraud continued for another four years under the noses of Candido and other state officials who ran the regional center, which is part of the Vermont Agency of Commerce and Community Development.

After the SEC brought charges against the developers, the U.S. Citizenship and Immigration Service, which runs the national EB-5 green card program, moved to terminate the state-run center. The Vermont EB-5 Regional Center was officially shut down last year. USCIS cited the state’s negligence and material misrepresentations made by Vermont officials. The state has appealed that decision.

More than 800 foreign investors put money into the fraudulent Jay Peak projects; more than half have lost both their money and access to the green cards they were promised in exchange for putting up $500,000 in the Jay Peak projects.

Shen’s main defense is that state officials knew what he was doing all along. Shen traveled with U.S. Sen. Patrick Leahy and Stenger in China and served as a translator for Jay Peak meetings.

Russell Barr, the attorney for the investors, has argued that because Shen is using the state as a shield, he should be allowed to depose state officials.

The judge has delayed and blocked depositions of top-ranking state officials, including John Kessler, who has served as the general counsel for the Vermont EB-5 Regional Center, from 2006 to the present.

In subsequent rulings, Reiss, who was nominated to the bench by Leahy in 2009, has effectively locked down the case without issuing an outright dismissal, which would allow the investors to appeal to the U.S. Second Circuit court in New York, which hears appeals from federal cases in Vermont.

Earlier this month, Reiss rejected another request by Barr to subpoena high-ranking state officials who were involved in the operation of the Vermont EB-5 Regional Center.

“The victims of the largest fraud in Vermont’s history have essentially, to date, been blocked from finding out who is actually responsible for their losses,” Barr said in a statement to VTDigger on Thursday.

At a hearing in November, Assistant Attorney General John Alexander, representing the state officials Barr had been seeking to depose, told the judge he opposed Barr’s efforts to question them. Alexander called Barr’s request to depose those state officials a “fishing expedition.”

At that same hearing, Barr told the judge he was seeking answers on behalf of bilked investors from those in the know about EB-5 program in Vermont, and the testimony is relevant given Shen’s expected defense.

Barr said that Shen, in his defense, is pointing the finger at state officials. Specifically, among a list of defenses Shen intended to raise, court filings stated, “Defendants reasonably relied upon the representations of officials of the State of Vermont.”

At that hearing in November, Reiss told Barr to first take the deposition of Shen, and depending on what Shen says, the judge said she may allow Barr to depose those former state officials.

That deposition, according to Reiss’ recent ruling, took place on Jan. 22.

“(Shen) stated that, in directing clients to invest in Jay Peak Projects, he relied upon marketing materials that he obtained from Jay Peak Projects as well as on ‘the level of support [the VRC] gave to Jay Peak [Projects] throughout the years,’” the judge wrote.

Reiss added, “Attorney Shen stated that he also relied upon speeches made by State officials at a 2009 conference and at 2013 seminars held in China.”

The judge’s ruling includes a lengthy excerpt from Shen’s deposition in which he is questioned about a 2013 trip to China where he attended seminars on Jay Peak projects.

Also in attendance at those seminars were state officials, including then-Gov. Peter Shumlin and Lawrence Miller, at that time secretary of the Agency of Commerce Community Development. Shen was their interpreter.

Reiss wrote in her ruling that during his deposition Shen “identified no private conversations with State of Vermont officials on which he relied in choosing to direct his clients to the Jay Peak projects.”

Barr has contended that it “strains reason” to believe that Shen did not have any private conversations with the state officials when they traveled and attended events together aimed at soliciting EB-5 investors for projects in Vermont.

The judge will allow Barr to continue a deposition of Brent Raymond, the former Vermont EB-5 Regional Center director. That deposition, which took place last year, was cut short when Raymond need to take care of a personal matter.

In his deposition, Raymond testified that he asked his superiors in 2012 to press Quiros and Stenger for an audit. However, his superiors ignored that request, which came four years before the SEC brought its civil investor fraud lawsuit against Quiors and Stenger.

The judge said she would allow Raymond’s deposition to continue for two more hours, split between Barr and Shen’s attorney. Barr’s questioning must be limited to “matters related” to Shen’s defense, Reiss said.