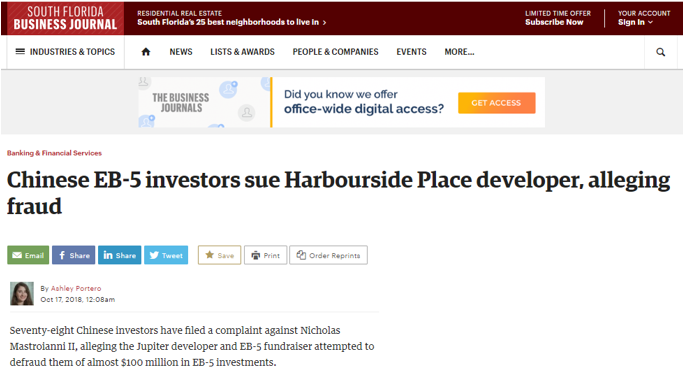 Seventy-eight Chinese investors have filed a complaint against Nicholas Mastroianni II, alleging the Jupiter developer and EB-5 fundraiser attempted to defraud them of almost $100 million in EB-5 investments.

According to a lawsuit filed in Palm Beach County Circuit Court last week, the investors in question paid $500,000 each – in addition to a $40,000 administrative fee – for a stake in Jupiter’s Harbourside Place. The loan was made through the EB-5 visa program, which grants U.S. residency to foreign investors who contribute at least $500,000 toward businesses that will create a minimum of 10 full-time U.S. jobs.

A total of 199 foreign investors purchased stakes in Harbourside Place for a total of $99.5 million. The investors believed the money would be used to fund a first priority, secured construction loan to the developer. The lawsuit, filed by Miami firm Levine Kellogg Lehman Schneider + Grossman, alleges Mastroianni intentionally fell one investor short of reaching the $100 million goal for that first priority loan in order to eventually control the new senior lender.

“By some wild coincidence, Mastroianni, who has been called the ‘hottest money-raiser’ in the EB-5 program, raised only $99.5 million,” the lawsuit alleges.

Mastroianni is the founder of the U.S. Immigration Fund, which connects foreign investors with opportunities that allow them to retain U.S. residency through the EB-5 program.

While at least 60 of the 78 Chinese investors suing Mastroianni have received their U.S. green card, they claim they were never paid back for their investment. The lawsuit alleges Mastroianni intentionally structured the financing of Harbourside Place in a way that would prevent the EB-5 investors from having the ability to foreclose on the loan to get their money back.

According to the suit, the plaintiffs were “stepping into a carefully planned fraud designed to yield Mastroianni unfettered access to their money to finance his project.”

Marcelo Diaz-Cortes, one of the lawyers representing the plaintiffs, said his clients should have been reimbursed for their loan in late 2017. The plaintiffs are suing Mastroianni, Harbourside Place LP, the U.S. Immigration Fund LLC, Florida Regional Center LLC, Allied Capital and Development of South Florida, Richard Yellen and R. Bowen Gillespie for damages.

Mastroianni could not be reached for comment. In a statement, Harbourside Place denied the allegations, arguing that a majority of the development’s investors have not sued and continue to support the project.

“The allegations are baseless, factually incorrect and totally ignore the economics and legal structure of the Harbourside investment,” the statement said. “We intend to prevail in court against these plaintiffs, and to continue to work with the majority of investors in Harbourside who did not sue.”

Harbourside Place, a shopping center in northern Palm Beach County, features restaurants, retail stores, galleries, a hotel and a marina. The $170 million development was completed in December 2014, according to Allied Capital and Development of South Florida’s website.

The Harbourside Place lawsuit is the latest example of a high-profile dispute over alleged EB-5 financing fraud. The program, created in the Immigration Act of 1990, was not widely used until the Great Recession, when developers began to turn to wealthy foreign investors when they could not secure loans from U.S. banks.

Diaz-Cortes said the lack of oversight surrounding EB-5 visas, in addition to foreign investors’ unfamiliarity with the American legal system, has created a prime opportunity for fraud.

“There is and was a long line of foreign investors waiting to write checks,” he said. “It’s easy to get capital this way, and the lack of oversight makes it easy to put together with minimal supervision.”