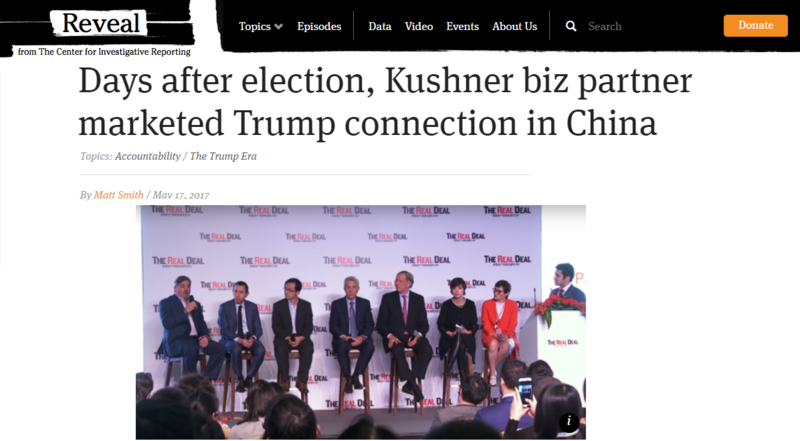 Ten days after Election Day, Kushner’s business partner was joined by former New York Gov. George Pataki, who predicted that Donald Trump would be a big supporter of a program in which investors pay $500,000 for a chance at a green card.

“President-elect Trump is going to be a strong supporter of the EB-5 program,” Pataki told a wealthy audience at Shanghai’s Jing An Shangri-La Hotel.

The Kushner Companies canceled its China road show this month amid accusations of corruption and influence peddling.

But as of yesterday, a promotions company still advertised an upcoming “Kushner1” event in the Chinese city of Wuhan seeking money for the family’s Jersey City, New Jersey condo tower, 1 Journal Square. Kushner1 events scheduled for last weekend for Shenzhen and Guangzhou only disappeared from the company’s website Monday, after they would have been completed.

The Kushner business partner behind the investment push, Nicholas Mastroianni II, did not respond to questions about whether similar events he has held would continue.

Mastroianni raises money for the Kushners and other developers, and had already established a practice of selling investments in China based on the idea of political connections. Days after the November election, he appeared on stage along with Pataki and a former U.S. ambassador.

Their presentations show how much people in the visa business, such as the Kushners and Mastroianni, rely on using American political figures to draw investors. In particular, Pataki and others emphasized their relationships with Trump at the November event.

“Whenever you make an investment or put money up, you want to be sure that you are protected and you have the right people who will be handling your money,” Pataki said. “And I know that specifically this little fund that I am part of, they’re ready to answer any questions you might have asked, because many of you want to feel secure. … And I wish all of you good luck and good health and sunshine tomorrow.”

After Reveal from The Center for Investigative Reporting asked Pataki about his Shanghai comments, he said in an email: “I am not a part of any fund.”

The political pitches have become something of a requirement in the industry that has been built around a U.S. immigration program known in China as the “golden visa,” referred to in the U.S. by the immigration code section EB-5.

The visa program was designed to give investors in job-creating American businesses a path to a green card. Real estate tycoons such as the Kushners have turned it into a way to sell condos. Investors buy an ownership stake in a condominium development company, rather than simply buying a condo unit. And they get a visa.

According to an Associated Press analysis, more than 100,000 Chinese have spent $24 billion on EB-5 visas during the past 10 years.

Mastroianni and other visa brokers earn this money by recruiting current and former U.S.  politicians as pitchmen. They trade on Chinese investors’ confusion about the difference between how political influence is wielded in the United States and in the People’s Republic of China. Ex-U.S. governors, mayors and former presidents have found work helping the Chinese to invest $500,000 here in exchange for a visa setting them up for legal U.S. residency with a green card.

As a member of Trump’s cabinet with a broad portfolio that includes international diplomacy, Kushner passed control of the company he helmed to family members 45 days after the Shanghai event. But Kushner remains a beneficiary.

Kushner has for years relied on Mastroianni’s help selling golden visas. They raised tens of millions of dollars in Chinese investments for Trump Bay Street apartments, branded under a licensing agreement with Donald Trump and developed by the Kushner Companies while Jared Kushner was CEO. Mastroianni next partnered with Kushner to help finance the nearby 1 Journal Square, the same development Kushner’s sister Nicole Meyer said meant “a lot to me and my entire family,” during a Beijing event.

According to the financial disclosures Kushner filed to join the Trump administration, he receives income of between $15,001 and $50,000 from a company described as 65 Bay, LLC … (Residential Real Estate in Jersey City, NJ). The company that raised the golden visa money for Trump Bay Street in Jersey City is stated as 65 Bay Street Funding LLC on government forms.

During his talk at the Hotel Shangri-La, Pataki joined other panelists insisting that Trump’s election just 10 days earlier would be good for Chinese visa investors.

“I have known President-elect Trump for about 30 years to be the very accomplished businessman and now what he’s talking about is infrastructure development, which is needed,” Pataki said.

At the same event, Charles Gargano, a former U.S. ambassador to Trinidad and Tobago, who is now CEO for Mastroianni’s company, likewise emphasized Trump’s business pedigree.

“I think now with President-elect Trump, who was a developer himself, a big businessman, I think that will magnify the need for a program like this,” Gargano said, referring to EB-5.

Pataki’s precise role with Mastroianni’s business might not have mattered with wealthy Chinese, the primary customers for EB-5 visas. They are sometimes receptive to investment pitches suggesting even tenuous links to U.S. officialdom, according to experts.

In China, it’s common for political figures to retain influence even after leaving office. Political family members can wield clout. A project endorsed by a Chinese Communist Party official can be seen as a sure success. Officials in America’s renowned democracy can be seen as having superior integrity. And customers for U.S. investment visas might not come from the large and growing class of worldly Chinese urban dwellers. Instead they’re sometimes first-generation provincial tycoons unaware how different things can be overseas.

Pataki, for example, is not known for hawking financial investments within in the United States.

But “a Chinese person would take it very seriously that somebody high ranking would be able to pull strings,” said Tom Doctoroff, the author of books on marketing in China.

Stanley Kwong, an adjunct professor of international marketing at the University of San Francisco, says his Chinese-born students sometimes ask him for EB-5 advice on their parents’ behalf. Many of China’s newly rich were raised by peasant-farmer parents, and are used to a system at home where a powerful person’s blessing is the most important guarantee. And siblings, wives, friends or offspring of elite bureaucrats may have real, if unofficial, pull. Ex-politicos in China, meanwhile, often retain powerful networks, Kwong said.

“In that situation for the Chinese investor, they think the low-end official at the U.S. embassy is probably giving them bullshit. But this guy, George Pataki, he’s going to give me better information because he’s more important,” Kwong said.

Michael Gibson, managing director of an investment advisory firm specializing in EB-5 visas, said investment visa presentations sometimes go to the edge of what might be allowable for selling investments in the United States.

“To the Chinese, in these presentations, it’s conveyed that the public official is doing this in the spirit of the public good. What’s not really conveyed is that the officials are being remunerated,” Gibson said. “Any material fact in the sales or marketing of these investments needs to be disclosed to the investor.”

In an email exchange with Reveal, Pataki would only say his fee “was much, much less than (Barack) Obama,” who stirred controversy in early May for accepting $400,000 in payment for a speech.

Pataki is one of a lengthening list of ex-politicians to cash in. In April, QWOS, the same promotions company behind the Kushner events in China, announced Mastroianni and former New York Mayor Rudy Giuliani would be featured speakers at a multi-city investment visa road show.

In 2012, George W. Bush accepted $200,000 from a company selling EB-5 visas to fund oil exploration. As part of a U.S. junket for potential Chinese visa investors, the company rented out San Francisco’s City Hall for an event featuring opening remarks by the president of the local Board of Supervisors, David Chiu.

“The situation for them is that this is the first time they came to the U.S., and they see all these names, and there is something in City Hall. In China, you can never host something at the equivalent of a City Hall,” Kwong said.

In July, the U.S. Securities and Exchange Commission obtained a $68.3 million judgment against the firm touted by Bush for an alleged “fraudulent scheme” to lure Chinese investors.