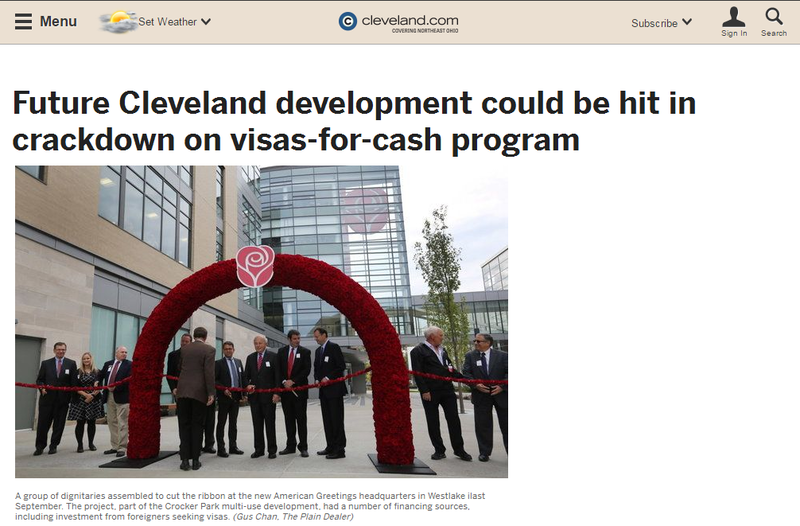 A federal immigration program lets rich foreign families come to the United States and stay, as long as they invest $500,000 in job-creating economic development and pass background checks.

The visa-for-cash program is supposed to help down-on-their-heels areas where banks and U.S. citizens might be reluctant to invest, and its promoters say it paid off wildly in cities like Cleveland -- and helped about 1,500 foreigners who invested in the area, mostly living in China at the time, get two-year visas or permanent residency in the United States.

But it's also helped fund upscale developments like shopping centers with Apple stores, Hyatt hotels and offices in relatively affluent places like Westlake and midtown Manhattan. The family of Jared Kushner, son-in-law and adviser to President Donald Trump, used the program to attract $100 million from Asian investors for a 50-story luxury apartment building, Trump Bay Street, in Jersey City, N.J. Trump's name is on the building but he is not an owner.

The program has had scandals and abuses, from a San Francisco ponzi scheme that defrauded investors, according to the Securities and Exchange Commission, to developers accused of pocketing Chinese families' money in northern Vermont.

Then there's a much more common criticism: Developers and financiers regularly find creative ways to make an area look impoverished on paper so it qualifies for foreign investment under the program -- even if unemployment is actually low and residents would shudder to call the neighborhood poor.

As a result, the visa program's future could be in jeopardy, and at a minimum is in for change, maybe soon. That's why Stephen Strnisha, chief executive officer of the Cleveland International Fund, which finds foreign investors willing to put money into Northeast Ohio development projects, wrote to Washington this month to express his concerns.

Without investors who wanted visas and were willing to put their money at risk, Strnisha elaborated in a telephone interview with cleveland.com, many of Cleveland's most worthy and most prominent real estate projects might have stalled or never started.

Foreigners seeking visas invested $45 million in the first phase of the East Bank redevelopment of the Flats, with a new Aloft Hotel and the Ernst & Young office tower as the anchors. That was in 2010, Strnisha said, when investment capital was hard to find because of the recession and real estate troubles.

"But for us, the project probably would not have gone through," said Strnisha, whose fund, acting as an investment bank, found the investors abroad.

The next year, amid a still-struggling development market, foreign investors committed $36 million through the Cleveland International Fund for what became the Westin Hotel, where Trump later stayed during the Republican National Convention. (Trump has criticized other immigration programs but has not given an opinion on this one, known for its immigration code as the EB-5 program.)

About $60 million from foreigners seeking visas went toward a $1.2 billion University Hospitals expansion in Cleveland. Another $36.5 million went toward expansion of the Crocker Park retail, office and residential project, including a new American Greetings headquarters, in Westlake. Even the Ninth and Euclid project in downtown Cleveland, which among other things turned an old bank into a widely heralded architectural gem of a grocery market, got a small share of its capital -- $13.5 million -- from foreigners seeking green cards.

With high-profile, popular projects like these, criticism of the  program is seldom heard in Cleveland, although Strnisha acknowledges some reforms may be due. Here, however, are a few stern voices in Washington:

The issue has become more pressing now that it's April. Unless Congress acts by the end of next week, April 28, the investor visa program will have to shut down. That has prompted a number of people in and out of Washington to work toward a solution.

Here's more detail about the program, the controversy and the possible solutions.

Created by Congress in 1990, the EB-5 program set up a way for American businesses and real estate developers to get investment capital from foreigners. In exchange for investing in projects that would create or save at least 10 full-time jobs, a foreign investor could apply and be considered right away for a two-year, conditional visa. His spouse and children under age 21 could come, too. After that two-year residency, the investor and his family can apply for green cards, allowing them to stay permanently, if they can show the investment met the project's goal for jobs.

On paper, the minimum investment had to be $1 million unless the project was in a rural or a "Targeted Employment Area" -- defined as an area whose unemployment rate was at least 1.5 times higher than the national unemployment rate. For those areas, the minimum investment required to get a visa was $500,000. Regardless of category, no more than 10,000 of these visas can be issued a year.

The way around that:

The program let developers define Targeted Employment Areas based on census tracts. But the rules were written so vaguely that developers and their bankers working in affluent areas eventually found they could include other census tracts in their project descriptions -- truly impoverished ones -- if it would help them make their case to investors who only wanted to invest $500,000 toward a visa.

That led to what has been described as gerrymandering. For example, the Crocker Park commercial district, including a new American Greetings headquarters in Westlake, qualified as a Targeted Employment Area because the project added census tracts in western Cleveland and Lorain County, as Strnisha acknowledges. That was hardly extraordinary; it was common practice across the country. As a result, the default investment for a visa became $500,000 rather than $1 million, regardless of a project's location. This is acknowledged by the program's critics and proponents alike.

The Government Accountability Office found that 12 percent of projects qualifying as high-unemployment TEAs actually "taped together" over 100 disparate census tracts, Rep. Bob Goodlatte of Virginia, chairman of the House Judiciary Committee, said at a March hearing.

"The GAO also found that more than three quarters of projects in supposedly high-unemployment areas are actually physically located in places with unemployment rates from 0 to 6 percent," Goodlatte complained.

One of those projects seeking investment capital, Goodlatte said, was Hudson Yards, advertised as "a triumph of culture, commerce and cuisine" on New York's West Side. Condos there will cost $1.9 million to $39 million.

How it has worked out:

The EB-5 program started out slowly and only hit peak demand -- the maximum of 10,000 visas a year -- in the last few years. There is now a backlog of applications.

So the numbers are:

In Cleveland, Strnisha says, 450 foreigners, mostly from China, have made $500,000 investments. If you counted them together, their money would add up to $225 million.

Theirs was just part of much larger pools of investments put together for each of the developments. The $225 million in foreign investment spurred $2.1 billion in investment altogether in the Cleveland area, Strnisha says, and created or saved 12,000 jobs.

Counting family members, this has led to the government granting more than 1,000 two-year visas based on the Cleveland-area projects, Strnisha estimates, with nearly every family member in the process of or intending to apply for permanent residency.  He estimates that about 500 others have already obtained permanent visas, known as green cards.

Nearly all have settled outside of Ohio, typically on the east or west coasts.

About those job numbers:

How do you count jobs?

Not very accurately, is the answer given by Grassley, the Senate Judiciary Committee chairman.

"They instead are 'indirect' and based on vague estimates and economic modeling," Grassley said at a hearing. "A foreign national is allowed to count all jobs created by a project when obtaining their green card. This is even if EB-5 money is only a mere fraction of the total investment."

So a lot of people have a problem with this program. Here are a few proposals for change:

And those reforms are:

Strnisha is a board member of that industry group. It goes by the name IIUSA, which stands for Invest in the USA. IIUSA and Strnisha say they understand the need to tighten the census tract requirements and reduce or eliminate gerrymandering. And they said the base investment level of $500,000 could come up. Strnisha said $700,000 to $800,000 might be appropriate.

"It's fair to say it should be increased," Strnisha said. But he and the industry group don't want the requirement to rise to $1.3 million, as the Obama proposal suggested.

The proposed $1.3 million minimum investment for a visa would be too high, he said, and push away foreign investors and families.

That's because the investors want only two things, Strnisha says: a green card, and their money back eventually. They're not looking to become real estate investment moguls. Someone ready to invest $1.3 million would look for a better financial return than these projects, Strnisha said.

This will all play out next week, at soonest, with a possibility of Congress passing one or two temporary extensions. But facing the April 28 deadline, a compromise looks possible.

Peter D. Joseph, executive director of IIUSA, said in a statement to cleveland.com that his group will "continue our mission to shape the program into an even better economic development tool.

"American workers and local developers across the country depend on EB-5 as an essential source of capital, which is why IIUSA is working so hard for improvements that protect both the integrity of the program and the projects that are contributing so much to American communities."