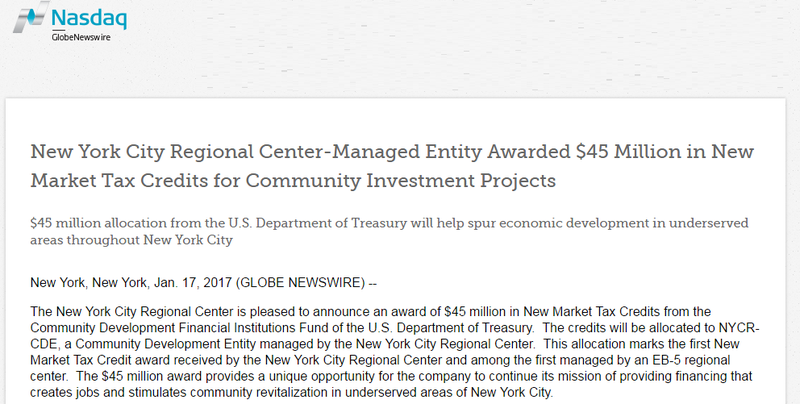 “We are thrilled to receive this allocation,” added Mary King, Chief Operating Officer of the New York City Regional Center.  “The $45 million New Market Tax Credit award will help spur economic growth, create jobs, and bring new services and opportunities where they are most needed in New York City. We look forward to supporting many community projects and businesses throughout the city.”

To receive a New Market Tax Credit allocation award from the U.S. Department of Treasury, the New York City Regional Center was required to demonstrate a mission and track record of providing investment capital for low income communities.  Since its designation in 2008 by the United States Citizenship and Immigration Services, the New York City Regional Center has secured $1.36 billion of capital for twenty-one different economic development projects.  Examples of investment in New York City include:

“We are pleased that the New York City Regional Center has been recognized as an organization with a proven track record of providing capital to areas in need of investment,” said Paul Levinsohn, Co-Managing Principal of the New York City Regional Center. “The allocation from the U.S. Department of Treasury provides a terrific opportunity to deliver financing to underserved communities and continue our role in supporting economic development and job creation.”