EB-5 Visa Program Extended As Written, but Changes Are a Must 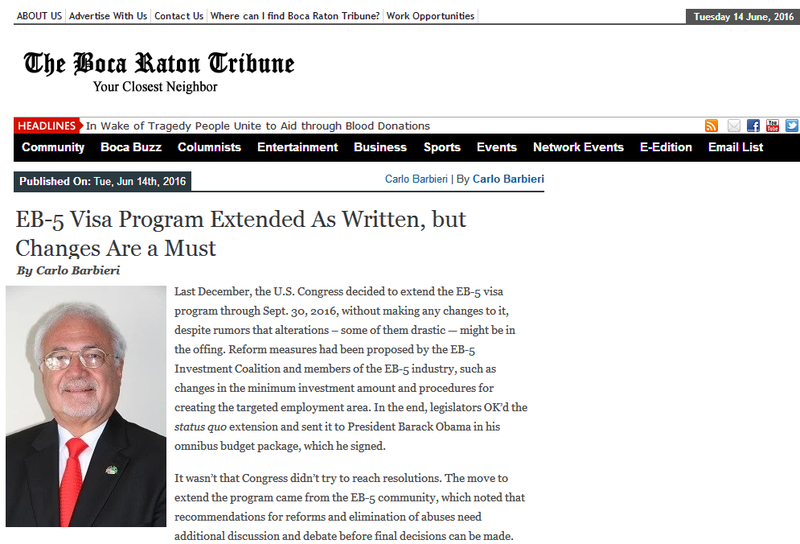 Last December, the U.S. Congress decided to extend the EB-5 visa program through Sept. 30, 2016, without making any changes to it, despite rumors that alterations – some of them drastic — might be in the offing. Reform measures had been proposed by the EB-5 Investment Coalition and members of the EB-5 industry, such as changes in the minimum investment amount and procedures for creating the targeted employment area. In the end, legislators OK’d the status quo extension and sent it to President Barack Obama in his omnibus budget package, which he signed.

It wasn’t that Congress didn’t try to reach resolutions. The move to extend the program came from the EB-5 community, which noted that recommendations for reforms and elimination of abuses need additional discussion and debate before final decisions can be made.

During the past few months, Congress has conducted hearings on proposals to realign and revamp the EB-5 industry and to eliminate abuse. Two sessions on these topics were conducted by the U.S. Senate Judiciary Committee: one Feb. 2, 2016 entitled “The Failures and Future of the EB-5 Regional Center Program: Can it be Fixed?” and the second, on April 13, 2016, was called “The Distortion of EB-5 Targeted Employment Areas: Time to End the Abuse.”

In addition to the need for reform and clarification of the program, U.S. Sen. Dianne Feinstein (D-California) pointed out some of the fraud cases that have been reported during the history of EB-5. Examples include:

To date, discussions and observations of EB-5 activity point to the urgent need for USCIS to perform site visits and review economic models in order to verify if a project is going according to the plan submitted in the application.

At the April 13 hearing where Peter D. Joseph of Invest In The USA addressed the crowd, Daniel Healy of Civitas Capital Group, a large real estate firm with a complex of Regional Centers, pointed out that the TEA policy needs to be revised so investments can be allocated to truly distressed communities without disadvantaging other cities such as Dallas or New York City.*

In the words of Mr. Whipple, the TEA designation should be an indicator of economic distress. To focus in on unemployment as the exclusive basis for TEA designation fails to recognize other indicators of distress such as low wages and high poverty rates.

Among the many comments and recommendations* from current panel members, we can mention some here to further elaborate on the subject:

It’s unlikely that Congress will approve any changes this year because of the pending presidential election, so we undoubtedly will have to endure another extension until 2017 when the expiration date at the end September 2016 rolls around. Congress is not concerned with the economic benefits of the program, but rather with the compliance with the legislation and the provision of transparency in the program.

During the past few months, we have noticed many cases of fraud in the program such as the case of Jay Peak in Vermont. The most recent case involves a husband and wife accused of misusing two-thirds of the money they raised from investors to build and operate a new cancer treatment center that would use proton beam radiation to help oncology patients in Southern California.

In the meantime, we have to face several necessities. First, the industry needs a comprehensive reform of the EB-5 Investment Program. Second, even though 2016 is an election year, which could diminish the chances of the legislature agreeing on any significant changes by the end of September, companies interested in securing an EB-5 visa must submit a project, and do so quickly, before the visa program expiration date on Sept. 30, 2016. Third and finally, some changes such as an increase in the minimum investment amount and clarification of TEA designation criteria and program regulations are needed as soon as possible. A way must be found to make these changes happen in September or at the beginning of the next legislative session.