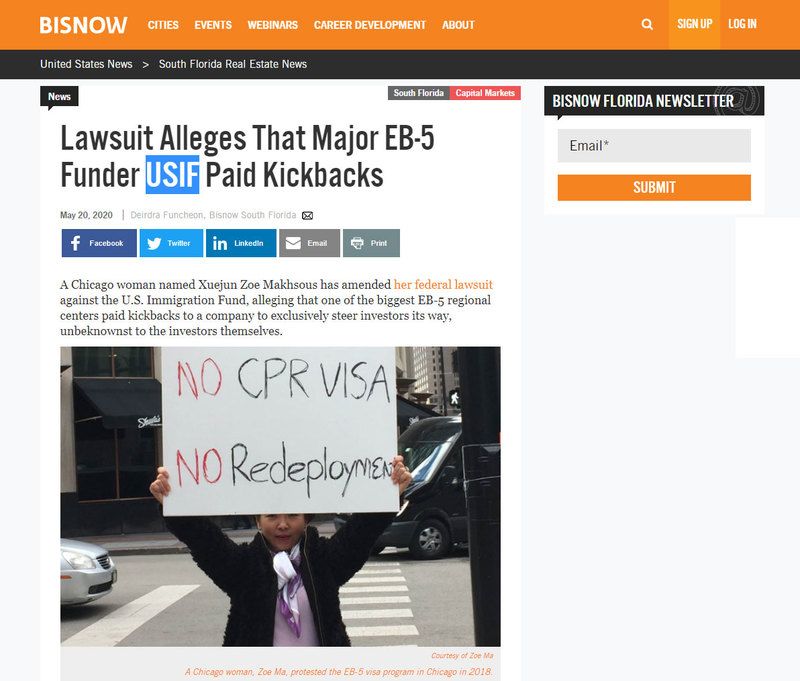 A Chicago woman named Xuejun Zoe Makhsous has amended her federal lawsuit against the U.S. Immigration Fund, alleging that one of the biggest EB-5 regional centers paid kickbacks to a company to exclusively steer investors its way, unbeknownst to the investors themselves.

USIF is a Florida-based company that pools money from foreign investors and loans it to American developers under the EB-5 program — in exchange, the investors can get U.S. visas. USIF has raised $2.9B for major American projects, including Brooklyn's Pacific Park project and the Nassau Coliseum, and helped some 6,000 foreigners, according to its website.

Makhsous, who was once an EB-5 investor herself and speaks Mandarin, helps Chinese-based investors — who each invest $500K or more — research EB-5 projects. She has sometimes advised investors not to participate, or to back out of, certain projects.

In competing lawsuits last year, USIF accused Makhsous of defaming its projects to potential investors. She fired back, accusing it of racketeering. USIF often used a "migration agency" called Qiaowai to recruit Chinese investors and match them to U.S. EB-5 projects, and Makhsous alleged they purposely misled investors with confusing paperwork and omissions.

USIF’s defamation case was thrown out by the New York State Supreme Court on jurisdictional grounds last April. Makhsous withdrew her racketeering allegation because of its complexity but has amended her complaint, hoping to prevail on a narrower scope, she told Bisnow. Makhsous is not an attorney, but represents herself pro se in court.

In the amended complaint filed May 5 in federal court in the Northern District of Illinois, she alleges defamation and tortious interference with a business relationship. She is suing USIF, its founder, Nicholas Mastrioanni II, Qiaowai head Ying Ding and Mastroianni’s attorney, Richard Haddad.

Makhsous has long argued that EB-5 regional centers exploit loopholes in securities law. They are often not Securities and Exchange Commission-registered investment advisers, claiming an exemption based on the fact that the investors get advice from migration agents in their home countries. But such agents aren't properly qualified as advisers there, either, Makhsous said.

Makhsous explained in a call with Bisnow that, last fall, she had been helping a Chinese investor with a separate case that went to arbitration. In that case, she was able to examine documents from USIF, and found her “holy grail”: a finder’s fee agreement that defines a “confidential and exclusive relationship” between Ying Ding and USIF, in which Ding's company agrees to “not divert Foreign Investors to U.S. projects which compete” with USIF’s.

Makhsous alleges that USIF charges developers 4% to 6.95% annual interest on its EB-5 loans, but gives Chinese investors just 0.25% and kicks back 1.85% to 3% to Ying Ding's company. Each investor also paid $49K to $52K in administrative fees to USIF, $40K of which was kicked back to Qiaowai, Makhsous claims.

“It is a bait-and-switch scheme unknown to unsuspected Chinese investors," Makhsous' suit says. “If Chinese EB-5 investors were aware of the secret dealings between Defendants Mastroianni and Qiaowai, they would not have relied on the due diligence provided by Defendant Qiaowai to make investment with Defendant Mastroianni.”

In court documents, USIF’s lawyers warned Makhsous that she would be in violation of the arbitrator’s orders if she disclosed confidential documents from a separate case. Makhsous said USIF has used the arbitration process and painted her as unreliable in court and in news reports to prevent disclosure of its own misdeeds. Her lawsuit points to four other suits against Mastroianni/USIF by more than 200 investors.

"Every one of [USIF's] projects has complied with the immigration regulations, tens of thousands of American jobs were created, and thousands of investors are achieving their immigration dreams," Haddad told Bisnow last year when the court battle had just began.

None of USIF, Haddad nor lawyers for Qiaowai responded to requests for comment for this story.