More than 60 I-829 Petitions were approved by USCIS over the past month. I-829 approvals have been granted to investors in four different CanAm EB-5 projects

CanAm Enterprises, LLC (“CanAm”) is thrilled to announce that more than 60 I-829 Petitions were approved by USCIS over the past month! I-829 approvals have been granted to investors in four different CanAm EB-5 projects -- the Sony and Time Warner projects in Los Angeles, the Kimpton Lafayette Hotel project in Philadelphia, and the Valley Forge Convention Center project in CanAm’s regional center in partnership with the Commonwealth of Pennsylvania.

The I-829 petition is the final step of the EB-5 visa process for immigrant investors to become lawful permanent residents of the United States. The I-829 petition includes evidence that the immigrant investor successfully met all United States Citizenship and Immigration Services (USCIS) requirements of the EB-5 program, specifically that the investment was made and the required jobs were, in fact, created. Once the I-829 is approved, the investor’s conditional residency restriction is lifted, allowing the investor, their spouse, and unmarried children under the age of 21 to live in the United States permanently. As a result, the approval of the I-829 petition is a marker, indicating the true success of an EB-5 investment.

According to statistics published by USCIS for fiscal year 2007 to March 2015, the USCIS has approved 21,251 I-526 approvals. The I-526 petition grants conditional permanent residency and is the first step in the immigration process. On the other hand, the USCIS has only approved 5,484 I-829 petitions in the same period of time. The number of I-526 petitions approved is approximately four times greater than the number of I-829 approvals. This further demonstrates the careful planning necessary to gain full permanent residency. 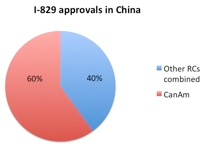 CanAm has established a leading reputation by diligent preparing each project with the end goal being the investor families’ I-829 approvals. From 2007 to the present, CanAm has had 1, 447 I-829 approvals. This is approximately 26.4% of the total number of I-829 petitions that the USCIS has approved. As of I-829 approval received for Chinese investors, CanAm’s market share comprises up to 60%! CanAm expects to work hard to uphold its reputation as a prominent figure in the EB-5 industry.

About the EB-5 Investor Program

The EB-5 Immigrant Investor Program (EB-5), administered by the United States Citizenship and Immigration Services (USCIS), provides opportunities for qualified foreign nationals to achieve permanent legal residency in the U.S. through an investment in an USCIS-approved project that will generate at least ten full-time jobs in the United States.