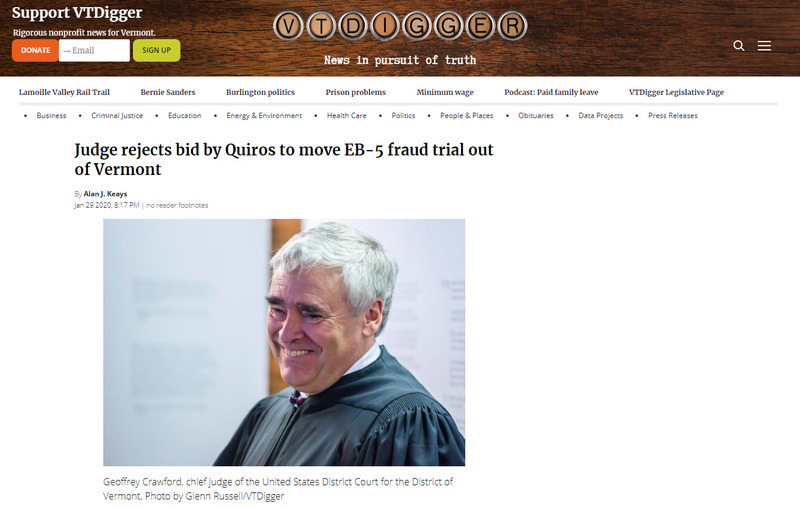 Geoffrey Crawford, chief judge of the United States District Court for the District of Vermont.

A federal judge has ruled against a request by Ariel Quiros, who prosecutors call the mastermind of a fraud scheme that bilked millions from investors, to move his trial out of Vermont due to “inflammatory” press coverage and prosecutorial conflicts.

“Overall,” Judge Geoffrey Crawford wrote in his ruling, “the court concludes that the media coverage in this case does not present ‘the kind of vivid, unforgettable information’ that the Supreme Court has recognized as ‘particularly likely to produce prejudice.’”

Attorneys for Quiros had argued that their client had been branded “public enemy number one” in press reports in Vermont of the investor fraud scandal that has played out over the past several years in the Northeast Kingdom.

They have also contended that federal prosecutors, due to their political connections to the state’s top officials, including former Gov. Peter Shumlin and U.S. Sen. Patrick Leahy, D-Vt., shied away from examining the roles of public officials and zeroed in on Quiros.

Crawford, in his ruling late Tuesday, rejected those arguments as well as another that he consider removing himself from the case over his own political ties to potential witnesses in the case – including to Leahy, U.S. Sen. Bernie Sanders, I-Vt., and former Vermont governors, Shumlin and Jim Douglas.

Crawford was appointed to the Vermont Supreme Court by Shumlin and then recommended for a federal judge position by Leahy. The judge in his ruling described his current relationship with Leahy as “cordial and respectful,” but limited to events such as naturalization ceremonies.

“The relationship was closer during the selection and confirmation process, but that was almost six years ago,” Crawford wrote. “My relationship with Governor Shumlin is similar except that it was limited to an interview and a swearing-in event.”

The judge wrote that it’s “natural and unsurprising” that he feels “gratitude” to both Leahy and Shumlin for their support.

“At the same time,” Crawford wrote, “I am acutely aware that both of these public figures are strong advocates for judicial independence, and either would be disappointed if they were treated by the court in some favorable manner different from other witnesses.”

A hearing on the change of venue motion was held last month. There have also been back-and-forth filings between attorneys for Quiros, Jay Peak’s former owner, and prosecutors in recent months over whether he and two of his business partners charged in the case, Bill Stenger and William Kelly, could receive a fair trial in Vermont.

Stenger, Jay Peak’s former CEO and president, and Kelly, a key adviser to Quiros, joined in support of Quiros’ bid to have the trial moved outside of the state.

All three – Quiros, Stenger and Kelly – as well as a fourth defendant, Jong Weon (Alex) Choi, were indicted in May by a federal grand jury in Vermont on several federal counts, including wire fraud and making false statements regarding a failed biomedical research center proposed for Newport, known as AnC Bio Vermont.

AnC Bio Vermont ground to a halt before it ever really started, even after raising more than $80 million from 169 foreign investors seeking green cards through the federal EB-5 immigrant investor program.

Those civil actions accused the two developers of misusing $200 million of the more than $450 million they raised through the federal EB-5 immigrant investor program meant to finance several development projects in northern Vermont, including massive upgrades at Jay Peak

Both Stenger and Quiros have since reached monetary settlements to resolve those lawsuits. In those settlements, neither man admitted or denied wrongdoing.

Choi was the operator of AnC Bio Korea and a business associate of Quiros. AnC Bio Vermont, according to the developers, was to be modeled after AnC Bio Korea. Choi has yet to be arraigned on the charges against him and he hasn’t attended any of the hearings in the case. Federal prosecutors and his attorney have refused to reveal anything about his whereabouts.

Ariel Quiros, center, arrives outside federal court in Burlington for his arraignment on May 22, 2019.

Levine, in a filing seeking to have the trial moved from Vermont, cited hundreds of news articles over many years from outlets around the state, including VTDigger, as making it impossible for Quiros to get a fair trial in Vermont.

“Spurred on by the Government and other federal and State politicians who have scapegoated Mr. Quiros to deflect attention from their own involvement in the charged conduct,” the filing stated. “The Vermont media have convicted Mr. Quiros before he has had his day in Court.”

The filing also cited conflicts by the U.S Attorney’s Office in Vermont, headed by Eric Miller at the time the criminal investigation began in 2015, as well as by his predecessor, Christina Nolan, who is the current top federal prosecutor in the state.

As a result of those conflicts the federal prosecutors, according to Quiros’ filing, did not probe the role of the top political and state officials and employees in the EB-5 scandal, and instead focused on Quiros.

Eric Miller, who had been the top federal prosecutor in Vermont, was recommended by Leahy for that post in 2015, shortly after Elizabeth Miller, his wife, left her job as chief of staff for Shumlin.

In April 2016, when the U.S. Securities and Exchange Commission and the state civil enforcement actions were brought against Quiros and Stenger, Eric Miller said his office was investigating whether federal criminal charges should be filed.

Quiros’ attorneys have argued that Eric Miller should have recused himself earlier from the case, given his wife’s ties to the Shumlin administration.

“As the Government acknowledged,” Quiros’ lawyers wrote in a filing, “Miller was recused in 2016. But it appears that Miller directed the investigation for a least a year during which the investigatory approach appears to have been shaped and tainted.”

In addition, the lawyers for Quiros contended, Nolan, who followed Miller in the office as the U.S. Attorney for Vermont, had a conflict of interest given that, like her predecessor, Leahy recommended her for the post.

U.S. Attorney for Vermont Christina Nolan announces the federal criminal charges against the developers of the AnC Vermont project.

Leahy, despite being a big backer of the AnC Bio Vermont project, was never called a witness before the grand jury by federal prosecutors investigating the fraud case.

Regarding the argument that Miller should have recused himself earlier, Crawford wrote in his ruling that there is “no cause in this case” to decide that issue.

“The Indictment in this case was issued in May 2019 – more than three years after Mr. Miller recused himself, and more than a year after Ms. Nolan assumed the office of U.S. Attorney in late 2017,” Crawford wrote.

“Even assuming that Mr. Miller should have recused himself earlier than he did,” the judge added, “new prosecutorial leadership in the case had ample time to independently assess the direction of the investigation and to arrive at a charging decision.”

As for whether Nolan had a conflict, Crawford wrote that there is “no question” that Leahy supported her nomination to the post of U.S. attorney for Vermont and the senator was also “one of the political figures who initially promoted” the AnC Bio Vermont project and a potential witness if the case goes to trial.

“Initially, it does not appear from the current record that Senator Leahy’s public conduct and statements about the Vermont project make him a central or ‘key’ witness in this case,” Crawford wrote.

“More importantly,” the judge added, “the fact that Senator Leahy supported Ms. Nolan’s nomination as U.S. Attorney does not, by itself, suggest that Ms. Nolan’s decision-making in this case was compromised.”

The case is currently set for trial in October in federal court in Rutland, with jurors drawn from the state’s six southernmost counties.