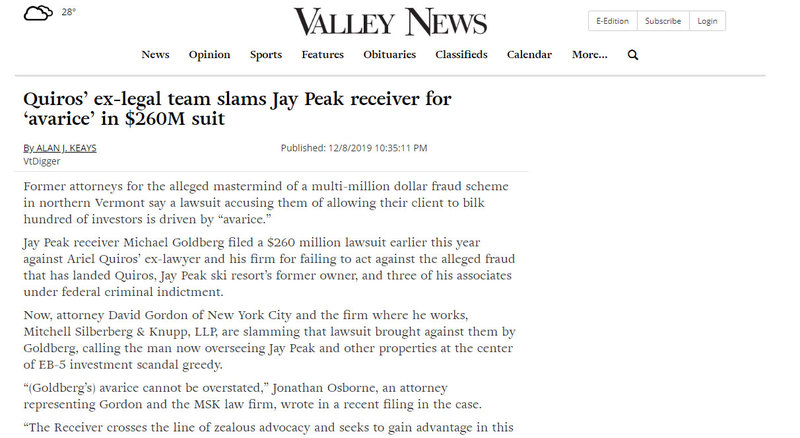 Former attorneys for the alleged mastermind of a multi-million dollar fraud scheme in northern Vermont say a lawsuit accusing them of allowing their client to bilk hundred of investors is driven by “avarice.”

Jay Peak receiver Michael Goldberg filed a $260 million lawsuit earlier this year against Ariel Quiros’ ex-lawyer and his firm for failing to act against the alleged fraud that has landed Quiros, Jay Peak ski resort’s former owner, and three of his associates under federal criminal indictment.

Now, attorney David Gordon of New York City and the firm where he works, Mitchell Silberberg & Knupp, LLP, are slamming that lawsuit brought against them by Goldberg, calling the man now overseeing Jay Peak and other properties at the center of EB-5 investment scandal greedy.

“(Goldberg’s) avarice cannot be overstated,” Jonathan Osborne, an attorney representing Gordon and the MSK law firm, wrote in a recent filing in the case.

“The Receiver crosses the line of zealous advocacy and seeks to gain advantage in this civil case by trying to link a defense lawyer to his former clients’ alleged criminal conduct,” Osborne wrote.

Goldberg on Friday referred questions about the case to attorney Jeffrey Schneider of the Miami-based firm, Levine Kellogg Lehman Schneider + Grossman, who is representing him in the lawsuit.

“I thought the characterization of the receiver as avarice was misplaced and overly aggressive — nothing is going into his pocket,” Schneider said late Friday afternoon.

“He is pursuing this case for the benefit of the victims. There may be many things you could call him, but selfish and avarice is really not one of them,” Schneider added. “I think that was a poor choice of words by the defendants and I would hope that they would apologize.”

As to the $260 million Goldberg is seeking in the lawsuit, Schneider said, “Those are the current losses to the Jay Peak receivership and the law in Florida is that a late, but active, participant in a fraud or a conspiracy is nevertheless on the hook for all the damages associated with a conspiracy.”

“We’re just trying to make the investors whole from the fraud,” the attorney added.

Schneider said that $260 million loss figure already factors in expected proceeds from the sale of the many assets Goldberg now controls as part of his receivership, including the two biggest, Jay Peak and Burke Mountain ski resorts in Vermont’s Northeast Kingdom, that Quiros formerly owned.