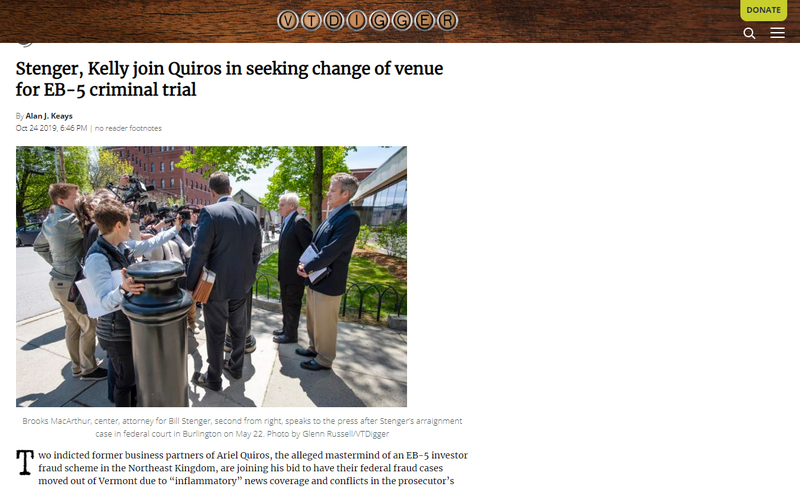 Brooks MacArthur, center, attorney for Bill Stenger, second from right, speaks to the press after Stenger’s arraignment case in federal court in Burlington on May 22.

Two indicted former business partners of Ariel Quiros, the alleged mastermind of an EB-5 investor fraud scheme in the Northeast Kingdom, are joining his bid to have their federal fraud cases moved out of Vermont due to “inflammatory” news coverage and conflicts in the prosecutor’s office.

This week, lawyers for Bill Stenger, the resort’s former president and CEO, and William Kelly, described by prosecutors as a “key advisor” to Quiros, filed motions seeking to sign on to Quiros’ motion to move the criminal fraud cases against them outside the state.

The attorneys for Stenger and Kelly each submitted one-page filings, stating that they believed they couldn’t get a fair and impartial jury in Vermont and asked the court to allow them to adopt Quiros’ arguments.

The paperwork filed on behalf of Stenger and Kelly state that they agree with Quiros’ arguments in his 88-page motion and want to join in his effort to move the trial.

“In support of this motion, Mr. Stenger states that by joining the pleading, rather than submitting a separate pleading, will avoid the duplicitous and repetitive materials with the Court,” attorneys Brooks McArthur and David Williams, representing Stenger, wrote in their filing.

“I support the assertion that there has been so much publicity and negative reaction as a result of the publicity that they will not be able to receive a fair and impartial jury here in the district of Vermont,” McArthur said an interview Thursday.

McArthur added that he wasn’t sure that having multiple  defendants making the same argument would strengthen the case to move the trial.

“I think it’s going to rise or fall on the merits of the argument, rather than the number of defendants that have filed the motion,” McArthur said.

A spokesperson for the U.S. Attorney’s Office in Vermont also declined Thursday to comment, other than to say that prosecutors will be submitting a written motion in response to the change of venue filings.

Judge Geoffrey Crawford, presiding over the criminal cases of all three men in federal court in Vermont, on Thursday granted the motions by Stenger and Kelly to join Quiros in the request to have the trial transferred.

Crawford set a hearing for arguments on the change of venue issue for Dec. 20 in federal court in Burlington.

Bill Kelly arrives outside federal court in Burlington on May 22 for his arraignment on charges pertaining to the EB-5 fraud case.

Those lawsuits accused the two developers of misusing $200 million of the more than $450 million they raised through the federal EB-5 immigrant investor program. The money raised through that program were meant to finance several development projects in northern Vermont, including massive upgrades at Jay Peak.

Both Stenger and Quiros have since reached monetary settlements in those cases. In those settlements, neither men admitted or denied wrongdoing.

In two previous hearings held in the criminal case since the charges were filed in May, the attorney for Quiros has stated that he didn’t believe his client could get a fair trial in Vermont, given the press coverage and the role of several state and federal officials tied to the case.

Those state and federal officials include political leaders such as former Republican Gov. James Douglas and former Democrat Gov. Peter Shumlin who over the years strongly backed the EB-5 projects headed by Stenger and Quiros.

Quiros’ lawyers in their formal filing earlier this month also cited the roles of Vermont’s congressional delegation, including Sens. Patrick Leahy and Bernie Sanders, as well as Rep. Peter Welch in supporting the projects.

In addition, the filing cited conflicts by the U.S Attorney’s Office in Vermont, headed by Eric Miller at the time the criminal investigation began in 2015, as well as by his predecessor, Christina Nolan, who is the current top federal prosecutor in the state.

Due to those conflicts the federal prosecutors, according to the filing, shied away from probing the role of the top political and state officials and employees in the EB-5 scandal, and instead led investigators to focus on Quiros.

“Spurred on by the Government and other federal and State politicians who have scapegoated Mr. Quiros to deflect attention from their own involvement in the charged conduct, the Vermont media have convicted Mr. Quiros before he has had his day in Court,” according to the filing.

“Not only has the media branded this case as the ‘Kingdom Con’ and ‘the largest fraud’ in Vermont history,” the filing stated, “but Mr. Quiros has become Vermont’s public enemy number one.”

U.S. Attorney for Vermont Christina Nolan discusses the criminal charges surrounding the AnC Vermont project at the failed site of a different Stenger-Quiros project in Newport.

The filing also stated that Nolan staged a press conference announcing the criminal charges in May against the developers of the AnC Bio Vermont facility at a site in Newport known as “the hole.”

That site is a fenced-in, downtown block containing a series of concrete foundations left over from razed buildings that made up the former Spates Block. Stenger and Quiros had proposed turning those several contiguous Main Street properties into a four-story development to be known as the Renaissance Block.

The site was proposed to feature retail and office space and a restaurant, as well as a hotel and longer-term suites. However, work on that project ground to a halt when the civil investor fraud lawsuits from state and federal regulators  were brought against Stenger and Quiros in 2016.

Nolan, according to the filing, held her press conference announcing the criminal charges there, rather than the site of the proposed Anc Bio Vermont, also in Newport, because it made for a better photo-op for the prosecution.

That’s despite the Main Street project in Newport is not mentioned in the criminal charges against the developers, the filing stated.

“The United States Attorney is also personally responsible for prejudicial publicity,” according to the filing.

“Multiple media stories were run following the United States Attorney’s statements that misleadingly linked ‘the hole’ to the Indictment’s allegations,” the filing added. “As one local media outlet reported in July 2019, the razed block in downtown Newport was ‘the physical embodiment of the scandal.’”

The fourth defendant in the criminal case, Choi, was the operator of AnC Bio Korea and a business associate of Quiros. He has submitted a filing with the court this summer seeking a court-appointed attorney and a lawyer was appointed to represent him.

However, Choi has yet to be arraigned on the charges against him and he hasn’t attended any of the hearings in the case. Federal prosecutors and his attorney have refused to reveal anything about Choi’s whereabouts.