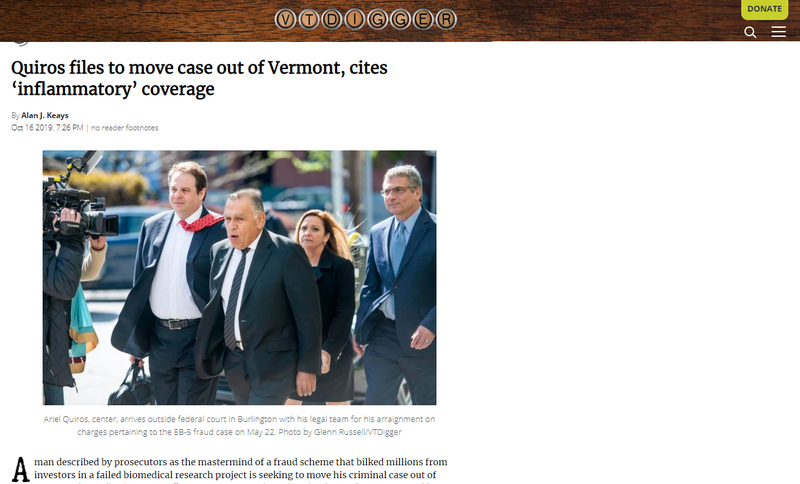 Ariel Quiros, center, arrives outside federal court in Burlington with his legal team for his arraignment on charges pertaining to the EB-5 fraud case on May 22.

Aman described by prosecutors as the mastermind of a fraud scheme that bilked millions from investors in a failed biomedical research project is seeking to move his criminal case out of Vermont due to “inflammatory” press coverage and conflicts by those who investigated him.

Attorneys for Ariel Quiros, Jay Peak Resort’s former owner, filed a motion for a change of venue Tuesday in federal court in Vermont where the criminal charges of wire fraud and making false statements to the government regarding the biomedical research center are pending.

Quiros and his former business partner, Bill Stenger, Jay Peak’s past president, as well as two of their associates, were indicted in May on the federal criminal charges related to the biomedical center project, known as AnC Bio Vermont, that had been proposed for Newport.

The legal team for Quiros, a Miami businessman, have previously stated at hearings in the criminal case that they intended to seek a change in venue in the case.

On Tuesday, those attorneys made it official by submitting an 88-page filing.

That filing cited hundreds of news articles spanning several years from outlets around the state, including VTDigger, as making it impossible for Quiros to get a fair trial in Vermont.

“Spurred on by the Government and other federal and State politicians who have scapegoated Mr. Quiros to deflect attention from their own involvement in the charged conduct, the Vermont media have convicted Mr. Quiros before he has had his day in Court,” the filing stated.

“Not only has the media branded this case as the ‘Kingdom Con’ and ‘the largest fraud’ in Vermont history,” the filing stated, “but Mr. Quiros has become Vermont’s public enemy number one.”

His lawyers have also cited the tangle of state and federal officials who have backed the series of EB-5 financed projects headed by the now-indicted developers.

Quiros’ lawyers have also pointed to the role Vermont’s congressional delegation, including Sens. Patrick Leahy and Bernie Sanders, as well as Rep. Peter Welch have played in boosting the EB-5 projects over the years.

Many of the more than 100 investors in the failed biomedical research center project have said they would not have invested in AnC Bio if not for the support of the governors, congressional members, and oversight of the project from the state-run EB-5 regional center.

When problems began to arise with the projects, according to the Quiros’ lawyers, those state and federal officials then sought to distance both from Quiros as well as the projects he headed.

In addition, the political connections extend to the U.S. Attorney’s Office, the federal prosecutors who have brought the criminal charges against Quiros and his associates.

For example, the filing stated, Eric Miller, who had been the top federal prosecutor in Vermont, was recommended by Leahy for the position in 2015, shortly after Elizabeth Miller, his wife, left her job as chief of staff for Shumlin.

At the time of the filing of the U.S. Securities and Exchange Commission and the state civil enforcement actions against Quiros and Stenger in April 2016, Eric Miller said his office was investigating whether federal criminal charges should be filed.

Quiros’ attorney argued in their filing that Eric Miller should have recused himself earlier from the case, given his wife’s ties to the Shumlin administration.

“As the Government acknowledged,” the filing stated, “Miller was recused in 2016. But it appears that Miller directed the investigation for a least a year during which the investigatory approach appears to have been shaped and tainted.”

In addition, according to the filing, Christina Nolan, who followed Miller in the office as the U.S. Attorney for Vermont, had a conflict of interest given that, like Eric Miller, Leahy recommended her for the post.

It was under Nolan that federal prosecutors in Vermont brought criminal charges against Quiros and his associates last spring.

The filing by Quiros’ attorneys argue that federal prosecutors have failed to look at the role played by state and federal officials in the EB-5 case, and instead, focused their attention on their client, Quiros.

Also, the filing stated, the court should consider dismissing the charges against Quiros given the conflicts in the federal prosecutor’s office.

“Based on Miller’s and Nolan’s failure to properly recuse themselves, Mr. Quiros has made a prima facie showing of a violation of his due process right to a disinterested prosecutor which, if unrebutted, should result in a dismissal of the Indictment and/or disqualification of certain prosecutors,” according to the filing.

“At minimum,” the filing stated, “the Court should hold an evidentiary hearing with appropriate discovery prior to the hearing, to allow this issue to be resolved on a full record.”

Kraig LaPorte, a spokesperson for the U.S. Attorney’s Office in Vermont, declined comment Wednesday on the filing by Quiros’ legal team.

It is expected that federal prosecutors will file a written response and the matter will be taken up at a hearing before federal Judge Geoffrey Crawford.