Pushing for Jobs, Visas in Oakland 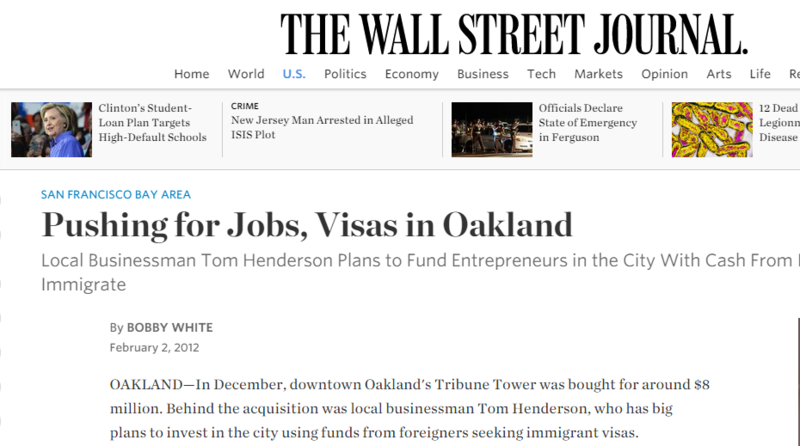 In December, downtown Oakland's Tribune Tower was bought for around $8 million. Behind the acquisition was local businessman Tom Henderson, who has big plans to invest in the city using funds from foreigners seeking immigrant visas. 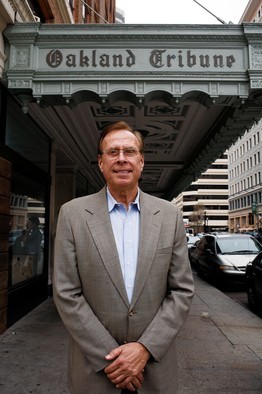 Mr. Henderson, 63 years old, is president of San Francisco Regional Center LLC, which works with prospective immigrants to finance local projects that will create jobs, conditions of their obtaining an EB-5 visa. Mr. Henderson's Regional Center will have a stake in all business deals and operate as a general partner.

"This is about jobs, helping Oakland to grow again," says Mr. Henderson, who operated seafood distributorship Avalon Bay Foods Inc. for more than 20 years before starting his Regional Center in December. "This is an opportunity for all to benefit, my investors as well as the city."

To obtain an EB-5 visa, which can lead to a green card, a prospective immigrant has to invest at least $1 million and create jobs in the U.S. But in cities that, like Oakland, have a jobless rate at least 150% of the national average, only a $500,000 investment is required.

The EB-5 visa program has been used to fund hundreds of projects across the country, including a $168 million Marriott Hotel as part of the new L.A. Live entertainment complex, and a beef-processing plant valued at more than $50 million in South Dakota.

Mr. Henderson says his first Oakland project to be funded by foreign investors is a call center, CallSocket LLC, which will be housed in the Tribune Tower and create about 300 jobs when it opens in March. The regional center plans to create 2,000 jobs in Oakland in the next two years.

"My plan, if I do everything right, is to become the largest employer in Oakland," Mr. Henderson says. 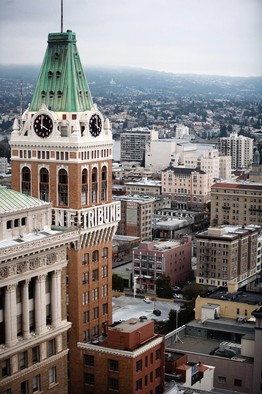 There are about 200 Regional Centers around the country, but Mr. Henderson's business model is unusual in that he plans to create jobs by acquiring undervalued real estate and investing in local entrepreneurs with promising business ideas. The more traditional strategy of a Regional Center is to build office parks or entertainment complexes, satisfying the employment-creation requirement with construction jobs.

Mr. Henderson's purchase of the Tribune Tower and his involvement with EB-5 visas shines a spotlight on the immigration program and the growing number of players who facilitate that visa process.

U.S. Citizenship and Immigration Services, which created the EB-5 visa program in 1990 and authorized the Regional Centers beginning in 1992, mandates that the centers have a goal of attracting foreign investors and creating plans for employment projects for a city. Regional Centers must win approval from the immigration agency by supporting employment claims with valid economic and statistical information.

One of the advantages of working through a Regional Center is that investors only have to show they created "indirect" jobs, as opposed to the requirement to provide "direct" jobs when operating without the aid of a Regional Center. Indirect jobs can include those held by employees of the producers of materials, equipment or services used by an EB-5 project.

The industry of Regional Centers can be murky, however. "This space is virtually unregulated outside of the U.S., and with so much competition, it's difficult to differentiate who can really deliver on what they promise," says Henry Liebman, a Seattle-based immigration attorney who founded American Life Inc., an EB-5 real-estate company that manages 10 Regional Centers nationwide. "Prospective investors really, really need to be picky about who they work with," he says.

It is unclear which foreign investors Mr. Henderson is working with and how many EB-5 visas he has helped them get. Mr. Henderson declined to elaborate on who his investors are, saying they are primarily from China and are reluctant to speak about working with him out of fear of reprisals from the Chinese government.

Kevin Johnson, dean of the University of California, Davis's law school, says it helps to turn to trained intermediaries to help shepherd investors through the complicated EB-5 process, especially since the visa comes with a host of economic and regional regulations. He says the regional centers can tap a network of regional experts and lawyers to overcome some of the complexity.

Mr. Henderson won approval from the USCIS to operate the San Francisco Regional Center in December. He declined to disclose how he was able to drum up his first group of investors, but says he was able to tap a network that provided more than enough money to provide seed capital for a first round of businesses.

Carl Stoney, a Berkeley-based attorney who has no affiliation with the San Francisco Regional Center but has offered legal and business advice to Mr. Henderson, says Mr. Henderson, through his former seafood distributorship, "operated in China for a long while and his ties around the business community here are deep. Oakland will certainly benefit."