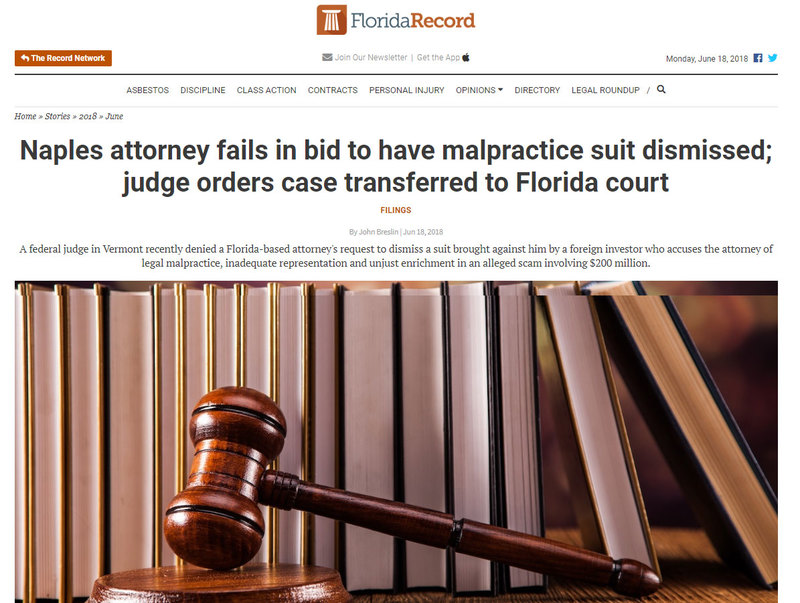 A federal judge in Vermont recently denied a Florida-based attorney's request to dismiss a suit brought against him by a foreign investor who accuses the attorney of legal malpractice, inadequate representation and unjust enrichment in an alleged scam involving $200 million.

In his suit filed in Vermont, Brazilian businessman Felipe Accioly Vieira said he hired Anthony Korda, and Korda Law Firm of Naples to represent him as he attempted to secure permanent residency in return for an investment in a Vermont holiday resort.

The owner of the Jay Peak Resort and a partner later came under investigation by the Securities and Exchange Commission (SEC), which originally accused Jay Peak and the partner of misusing $200 million in funds vacuumed up from foreign investors.

The SEC reached a settlement earlier this year with Miami-based Ariel Quiros, who allegedly misused more than $50 million in EB-5 investor funds for personal expenses and to purchase the Jay Peak resort. Under the settlement, Quiros was ordered to pay back $81.3 million and was fined an additional $1 million. His partner Bill Stenger was also fined, according to multiple local reports.

In filings, Vieira claimed Stenger recommended Korda as a good attorney to represent the Brazilian businessman in his dealings with the U.S. Citizenship and Immigration Services (USCIS) as he tried to secure permanent residency under the EB-5 Immigrant Investor Program. Under the program, those seeking first a visa, then permanent U.S. residency, must invest $1 million in a U.S. business and create at least 10 jobs.

In the suit, Vieira claims Korda and his firm inadequately represented him and is demanding in excess of $2 million in damages.

Korda attempted most recently to have the suit dismissed for lack of jurisdiction.

Conroy, after reviewing the arguments, ruled that the Vermont court lacks personal jurisdiction and that the case cannot proceed in Vermont. He further ordered that the case be transferred to the Middle District of Florida "in the interest of justice."

Federal law does not require the dismissal of a case just because of a lack of jurisdiction over one of the parties.

It "permits transfer of an action commenced in the wrong judicial district to the proper district in the interest of justice,” court filings said.

Vieira, who currently lives in Vermont, was ultimately denied his permanent residency and is facing deportation, according to the court papers.