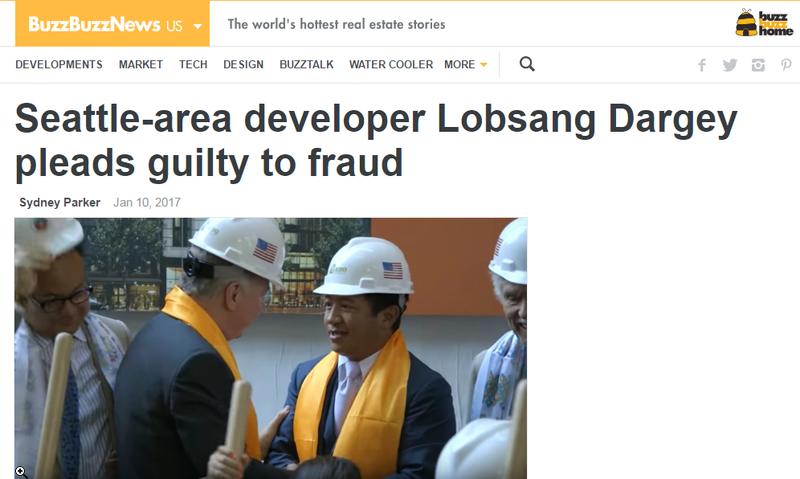 Lobsang Dargey, a former Tibetan monk turned Seattle real estate developer, pled guilty last week to two felony charges. He will spend up to 10 years in prison for defrauding investors, and will pay up to $24.2 million in restitution, reports The Seattle Times.

Dargey, who has worked on developments in Everett and Seattle, collected over $150 million from investors in Asia to expand outside those cities. He used the federal EB-5 program as an incentive for investors in China who were eager to receive a green card. The EB-5 program grants permanent US residency to foreigners who make significant job-creating investments in the US.

Unfortunately, instead of following through on those projects, Dargey used much of the money he collected for personal gain. He purchased a $2.4-million home in Bellevue and drove a $212,000 Bentley. Some of the investment money also went to large jewelry and dinner bills.

Dargey has agreed to pay up to $24.2 million in restitution to about 250 investors who lost money. And while many of the investors moved to the US after receiving conditional short-term visas, their permanent residency is now no longer guaranteed.

Federal prosecutors report that Dargey hid his illegal dealings by lying to investors, lenders and federal immigration officials in the EB-5 program. He also altered bank statements, balance sheets and other documents.

“He very much regrets that his conduct could have resulted in harm to anyone,” said his attorney, Bob Mahler, in a statement quoted by The Seattle Times. Mahler added, “[he] has made extraordinary voluntary efforts to insure, to the extent humanly possible, that every single investor obtains both the economic and immigration benefits of their investments.”

Dargey will be officially sentenced on April 6th this year. His assets have been frozen and his company, Path America, has been shut down by the US Securities and Exchange Commission.