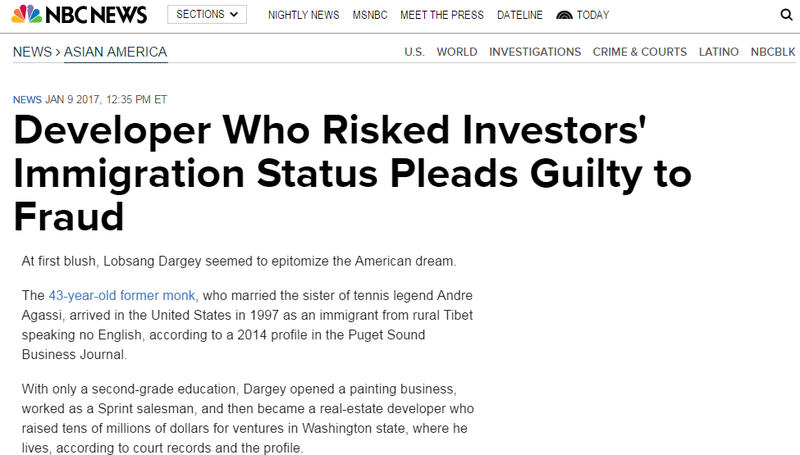 The 43-year-old former monk, who married the sister of tennis legend Andre Agassi, arrived in the United States in 1997 as an immigrant from rural Tibet speaking no English, according to a 2014 profile in the Puget Sound Business Journal.

With only a second-grade education, Dargey opened a painting business, worked as a Sprint salesman, and then became a real-estate developer who raised tens of millions of dollars for ventures in Washington state, where he lives, according to court records and the profile. 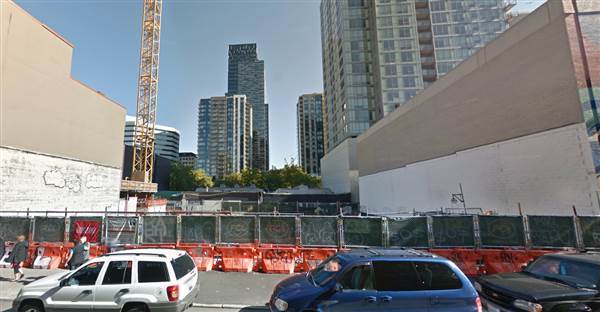 This still from Google Streetview shows the site of the Potala Tower in Seattle, Washington, one of the EB-5 projects that Dargey owned, in September 2016. The project has since been taken over by a different development company and will be rebranded.

Much of his success lay in wooing wealthy Chinese citizens through the United States EB-5 foreign investment program, which grants permanent residency in exchange for investments in businesses that create jobs. Some 282 immigrant investors contributed around $153.6 million to two of Dargey's approved projects, court documents said.

But Dargey's ascent in the real-estate world ended with a Jan. 4 guilty plea in federal court to charges that he abused the very immigration program that brought him success. When sentenced in April, Dargey faces up to 10 years in prison for conspiracy to commit wire fraud and concealing information from the United States government.

"He promised to use the money he received in a way that would allow investors to apply to become permanent U.S. residents," U.S. Attorney Annette L. Hayes said in a statement. "Instead, Mr. Dargey secretly sent millions of dollars overseas and used millions more for his own pet projects. In doing so, he harmed his investors financially and risked their dreams of legal status in the United States."

In response to an NBC News request for comment, Dargey's defense attorney, Robert S. Mahler, said his client acknowledges that "misrepresentations were made to investors" and to the United States Citizenship and Immigration Services (USCIS), which administers the EB-5 program.

"He very much regrets that his conduct could have resulted in harm to anyone and has made extraordinary voluntary efforts to insure, to the extent humanly possible, that every single investor obtains both the economic and immigration benefits of their investments," Mahler said in a statement to NBC News.

Dargey's defrauding of investors, lenders, and the EB-5 program took place between 2012 and 2015, according to his plea agreement in U.S. District Court for the Western District of Washington. During that time, Dargey owned and operated several real-estate development companies based in Washington, as well as two EB-5 regional centers, his plea agreement said.

An excerpt from Dargey's plea agreement detailing his actions.

The centers, authorized by the government, act as businesses that pool foreign investment money for development projects, which account for roughly 95 percent of EB-5 investments. Congress established the EB-5 program in 1990 to create jobs and stimulate the economy.

With roughly 10,000 visas awarded annually, the EB-5 program has become an expedient and popular way for wealthy Chinese citizens to earn permanent U.S. residency and bring over their family members. In 2014, Chinese nationals accounted for about 85 percent of EB-5 visa recipients, according to State Department figures.

To receive a conditional EB-5 green card, applicants must invest between $500,000 and $1 million in a U.S. business, depending on its location, and create or preserve at least 10 jobs.

Amid fraud claims, federal lawmakers have introduced several bills to overhaul the controversial program, though none have made it out of Congress. 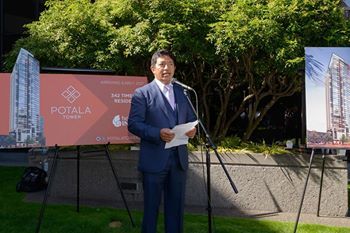 Groundbreaking event for the Potala Tower Seattle Project ©2014 Will Austin

The year-round farmer's market in Everett, 25 miles north of Seattle, features a hotel and apartment complex and is near completion, according to Dargey's attorney. The tower in downtown Seattle, still under construction, is a 40-story mixed-use high rise with a luxury hotel, residences, and a restaurant, Mahler said.

For the projects, Dargey prepared and submitted offering materials, such as partnership agreements and business plans, to potential investors in China, court filings said. 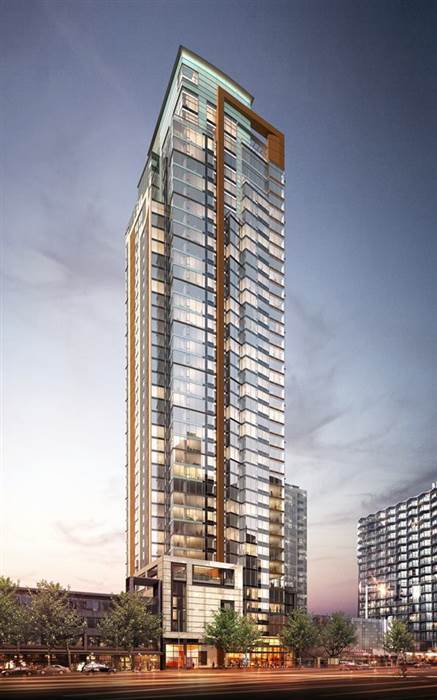 An artist rendering of the Potala Tower, a project previously owned by Dargey's development company.

The materials explained that Dargey would use the $500,000 investments to build the two projects according to their business plans, and the $45,000 in administrative fees to cover sales commissions and other offering expenses, according to court papers.

Dargey also pledged to contribute millions of dollars of equity to the projects — but that never happened, Dargey admitted in his plea agreement.

What's more, contrary to what he told investors, Dargey secretly used portions of their $500,000 investments to pay $11.5 million in commissions and so-called syndication costs related to the offerings, court records said. Those included a $1,300 dinner bill, a $31,000 jewelry charge, and a $1.4 million payment toward a home for the Path America Asia manager, court papers show.

He also used the investments to divert $16.8 million into real-estate projects he owned and controlled that were not part of the EB-5 program, court papers said. Dargey later tried to make the diversion of funds look legitimate, according to court filings.

Every dollar from the investor's EB-5 capital contribution must be applied only to the EB-5 projects.

"Dargey knew that his secret diversions could render the EB-5 investors ineligible for EB-5 visas because significant portions of their $500,000 investments had been used for purposes other than the EB-5 projects in which they had invested," prosecutors wrote in court papers. "However, Dargey never disclosed to investors or USCIS that he had misused the funds in this manner."

An excerpt of court documents detailing the charges against Dargey.

The shifting of investor funds, along with a lack of promised financial contributions on Dargey's end, ultimately led to funding shortfalls for the projects, court papers said.

Attempting to cover those deficits, Dargey took out a loan and raised $60 million from a Chinese investment company, half of which was allocated to one of the EB-5 projects and the rest to two of Dargey's own projects, court documents said.

Dargey also lied about how much money he had in an overseas bank account when applying for a $25 million construction loan he received for one of the EB-5 projects, according to court documents.

To that end, he produced doctored financial statements to the lender, showing that a Path America Asia Ltd. account had $9.6 million — when the actual balance was less than $450,000, court filings said. He later had an employee falsify balance sheets to hide from the loan company that millions of dollars had been diverted away from the EB-5 projects, court documents said.

Dargey took a similar tack in 2015 when trying to apply for a $66 million construction loan from the same company for the other EB-5 project, court papers said.

An excerpt from court documents detailing restitution to be paid by Dargey.

But that loan never materialized because the Securities and Exchange Commission had already won a court order to freeze Dargey's assets and stop him from soliciting new investors, according to court papers. Dargey reportedly reached a tentative agreement to settle in that separate civil case, according to The Daily Herald.

In all, Dargey defrauded investors and lenders of nearly $240 million, according to the charging document.

As for the 282 overseas investors who put money into Dargey's EB-5 projects, the status of their EB-5 visa applications was not immediately known. But Dargey's attorney said almost all the EB-5 investors for the farmer's market project "received conditional immigration approval" from USCIS.

For his part, Dargey will have to pay his victims a total of $24,242,220 in restitution, his plea agreement said.

Assistant U.S. attorney Justin Arnold, one of the prosecutors, told NBC News Friday that his office expects to ask "for a significant term of imprisonment," though he declined to say how many years. He also noted the restitution order when asked what justice would be in this case.

"Ultimately, those are the two things from the Department of Justice's perspective [that] are the most important for us," said Arnold, adding his office waived asking for a fine.

Dargey has surrendered his passport and remains free on bond as he awaits sentencing on April 6.