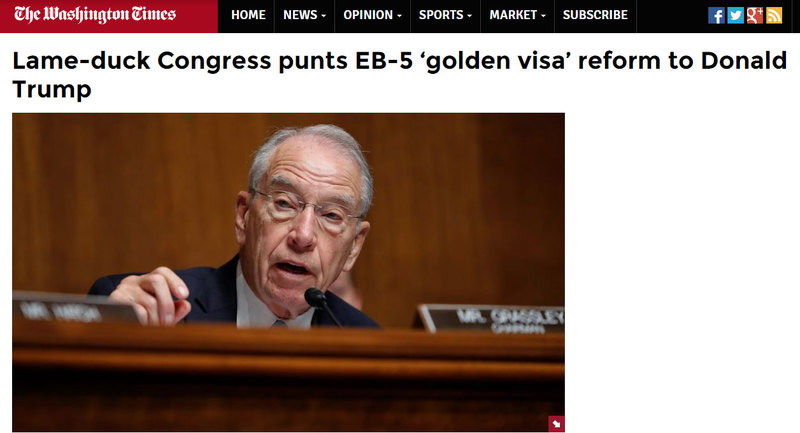 When the lame-duck Congress stumbled out of town earlier this month, lawmakers blew through yet another self-imposed deadline for cleaning up a controversial visa program that critics say could even become a pathway for terrorists into the U.S. — dropping the problem in the lap of President-elect Trump and a newly elected House and Senate to fix next year.

Critics say the EB-5 program, dubbed a “Golden visa” by immigration lawyers because it provides an expedited path for wealthy foreign investors to gain admission to the U.S., has been rife with widespread fraud and political corruption, including a scandal that touched the highest levels of the Department of Homeland Security.

Yet Congress just renewed the EB-5 visa, without any reforms, for another four-and-a-half months as part of the year-end stopgap spending bill.

“After another year, we have yet another missed opportunity,” said Senate Judiciary Committee Chairman Chuck Grassley, the lead of a group of lawmakers who say the program needed an overhaul or else should be allowed to lapse.

“The EB-5 regional center program has been plagued by fraud and abuse,” he said. “It poses significant national security risks. There are serious allegations that the program may be facilitating terrorist travel, economic espionage, money laundering and investment fraud.”

The program, first devised during the George H.W. Bush administration, rewards foreign investors with a path to citizenship if they put money into a job-creating economic development project. Normal projects require at least a $1 million investment, but they can get a discount $500,000 price if they invest in economically struggling areas.

The program has soared in popularity, with applications nearly tripling between 2013 and 2015. But all the new attention has also exposed what critics say are deep flaws in the program’s design, evolving into little more than a pathway for rich foreigners to buy U.S. citizenship.

A major scandal has erupted in Vermont, where federal regulators charged that one EB-5 investment center was scamming its investors, diverting hundreds of millions of dollars as part of a Ponzi scheme.
Alejandro Mayorkas, the former head of U.S. Citizenship and Immigration Services (USCIS), the agency that ran the EB-5 visa program, also came under fire in recent years when an inspector general found that he engaged in “unprecedented” intervention to help get EB-5 approvals in cases involving politically connected Democrats. Among the figures were outgoing Senate Minority Leader Harry Reid and Virginia Gov. Terry McAuliffe.

A Government Accountability Office report released in September said the Department of Homeland Security has taken steps to address potential fraud risks but that problems remain.

The confluence of issues in the visa controversy — immigration, alleged influence-peddling and the notion of the wealthy or politically connected getting favorable treatment — would seemingly fit in with Mr. Trump’s pledge to “drain the swamp” when he takes office in January.

But the president-elect’s transition team didn’t respond to questions about Mr. Trump’s position on the program, and some advocates even predict the investment program will thrive in a Trump presidency.
“His strong stance [is] against illegal immigration,” former New York Gov. George Pataki, a former 2016 GOP rival of Mr. Trump said at a recent panel in Shanghai hosted by The Real Deal, a New York real estate publication. “And EB-5 is a legal immigration program. He understands the need for capital, the need for investment.”

Charles Gargano, the executive director of the U.S. Immigration Fund, also predicted the investor visa program may have a bright future given Mr. Trump’s own background as an investor and real estate magnate.

“Under President-elect Trump, a developer himself, he will magnify the need for a program like this,” he said at the event, according to the publication.

Mr. Trump himself has some tangential connections to the program. The family of Jared Kushner, his son-in-law who emerged as a top adviser during the campaign, is in charge of a Jersey City complex that uses Mr. Trump’s name and reportedly leveraged $50 million in EB-5 money as part of its financing.

Despite bipartisan agreement that there should be changes to the program, a phasing out or a drastic overhaul isn’t likely under a new administration and with a new Congress, said David North, a fellow at the Center for Immigration Studies.

“I hope that it comes to a committee hearing or a floor vote, and then maybe we’ll see a different disposition,” he said.

“I don’t think the program’s going to get killed,” he said, while adding that it could be “usefully reformed.”

Mr. North said the guidelines of the program are so out of whack that he managed to draw a theoretical land tract around the White House that could qualify for funds, challenging the notion that the program creates jobs and development in low-income or economically distressed areas.

Advocates for the program, however, say that at least $11 billion in community investment and more than 220,000 American jobs would disappear if the EB-5 visa simply ended.

“We’re working for important reforms that improve rigorous vetting of projects and investors, so that the program can continue investing in communities and providing quality American jobs,” said Peter D. Joseph, executive director of Invest in the USA (IIUSA), an EB-5 trade group.