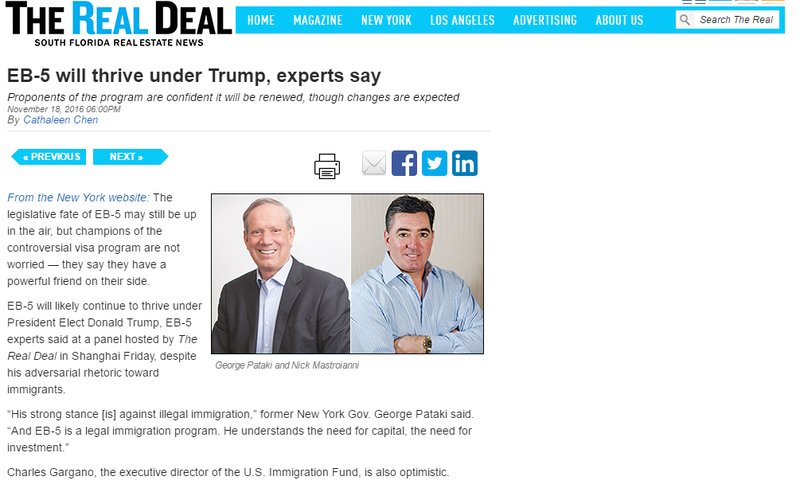 Proponents of the program are confident it will be renewed, though changes are expected

The legislative fate of EB-5 may still be up in the air, but champions of the controversial visa program are not worried — they say they have a powerful friend on their side.

EB-5 will likely continue to thrive under President Elect Donald Trump, EB-5 experts said at a panel hosted by The Real Deal in Shanghai Friday, despite his adversarial rhetoric toward immigrants.

Charles Gargano, the executive director of the U.S. Immigration Fund, is also optimistic.

“Under President-elect Trump, a developer himself, he will magnify the need for a program like this,” he said.

Last month, Congress granted a temporary extension ensuring that EB-5 would operate until at least early December. Meanwhile, lawmakers are mulling over a proposal to reform the program. They’re considering changes that include a raise in the minimum investment amount from $500,000 to $800,000 and tougher qualifications for project sites.

“It shouldn’t be an issue, but it is going to change,” U.S. Immigration Fund CEO Nick Mastroianni said. “I don’t see [the increased minimum amount] as a deterrent.”

Critics of the program also lament the fact that it commodifies American citizenship, provides opportunities for fraud and disproportionately benefits wealthy areas. Proponents, however, argue that such setbacks are far outweighed by its benefits.

“People can say it’s a backdoor ploy for citizenship,” Pataki said. “There’s always going to be criticism but the need for this is only going to be greater because banks [today] are taking a step back.”

For Chinese investors themselves, EB-5 will remain a popular immigration option. It could very well grow to new heights under a government that’s fully controlled by Republicans, panelists said.

Trump may not be against legal immigration, but work visa programs like EB-2 and EB-3 are getting tougher and tougher to attain, according to Yuan Shaozhong of QWOS, a program that advises Chinese immigrant investors.

“EB-5 is the only feasible option for a lot of Chinese immigrants right now,” she said.