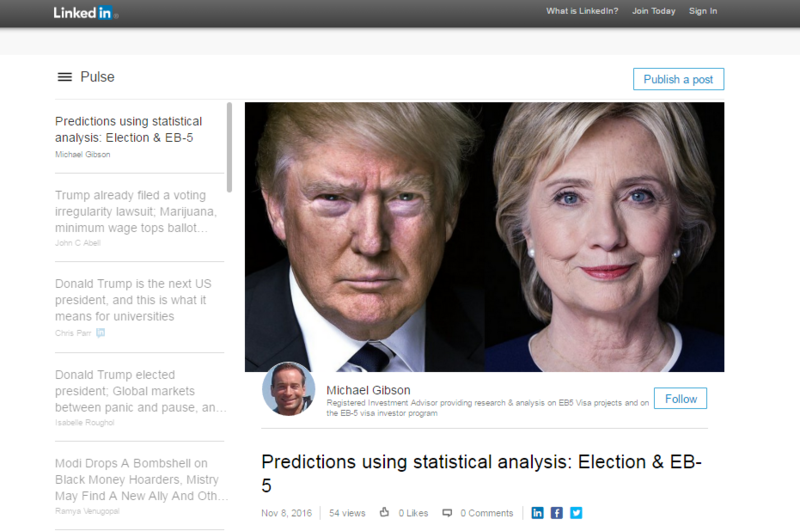 Based on the most recent poll projections Hillary Clinton has between a 70% to 98% to win the Presidency.

These outcomes can be estimated because the results are based on evidence based quantitative analysis compiled over time. Assuming that the underlying data is correct the outcomes can be predicted with a high degree of certainty given observable evidence to support these conclusions.

What is less certain is what will be the future of the EB-5 Program and that of issuers raising capital for their projects, investors and the immigration attorneys who represent them.

Here are some of the following predictions I will make for the future based on the data we have been compiling over the past several years:

It is hard to know precisely how many EB-5 investments there are in the market at any one time but there are two very clear trends which have been rising at a faster rate as the program has become more popular: more projects are entering the market looking for EB-5 capital and since the supply of EB-5 capital is relatively fixed, more projects are being left without meeting their funding goals. This is simply a supply / demand constraint with the available amount of EB-5 capital fixed but the demand increasing at a rising rate.

We are constantly being asked to remove projects from our database begun by Centers and then later abandoned, many with a substantial number of investors already committed. Project size does not seem to matter: we have seen abandoned projects ranging from $500,000 to over $250,000,000, nor does location as we have seen them abandoned from coast-to-coast and in between. We have also seen abandoned projects ranging from the newest RCs to some of the oldest, so longevity in the market does not seem to be a factor either, nor does asset class.

Many of these projects will not become viable or operational if the overall funding, including the EB-5 portion of the stack, is not obtained in time, yet we see few immigration attorneys concerned with the substantial supply / demand imbalance issue.

Many appear to be promoting these investments to their clients despite the significant obstacles that the issuers face in raising the needed capital given the much higher competition and costs to raise capital in the market. This, oddly enough, seems to be most true for the largest of projects out there, the ones requiring hundreds of millions of dollars and statistically speaking, the most likely not to achieve their funding requirements and thus fail to satisfy their EB-5 requirements in time. These are the highest risk projects in the market yet strangely seem to have the most immigration attorney support.

Such an unwinding of the Job Creating Entity (JCE) / New Commercial Enterprise (NCE) could then result in a denial of the investor's immigration petition as there would no longer be an investment into the JCE by the NCE. Needless to say, an unwinding of any investment, in particular capital intensive ones such as real estate, prior to stabilization would be disastrous in terms of being able to repay any EB-5 limited partners.

At the very least immigration attorneys should be aware of which Regional Centers are under investigation (it is a material fact which needs to be disclosed) before recommending them to their clients as there does exist a very real possibility that an adverse finding could result in its termination and possible denial for all investors regardless of which project(s) was/were the one(s) that caused the termination.

As a result of the increased number of non-filing of the I-924A by dormant RCs, regulatory actions, cases of fraud, litigation and investor complaints USCIS will terminate more Regional Centers. This trend has risen dramatically over the past two years and is forecast to increase at a faster rate over the next four years.

This is of special concern to those project which have "rented" their Center from a third party. They may find that the Center they were renting has been terminated through no action of their own, but could, nevertheless, affect their investor's ability to then claim the indirect jobs they were relying on as a result of the RC umbrella which is no longer there.

Attorneys who recommend projects to investor's should be aware of whether or not the Center being used by the developer has been rented and if so, what are the other projects that have also utilized that RC. Without knowing, and disclosing to their clients, which projects have also used that Center it would not be possible to do an adequate risk assessment of the likelihood of a termination of that Center by USCIS. Failure to disclose this information could be problematic for the attorneys representing their client's interests later in a dispute.

Regardless of what happens with any integrity measures imposed by Congress or adopted by USCIS, projects are coming under more intense scrutiny by investors, reporters, politicians and adjudicators and as a result of the increased scrutiny more may be proven to fall short of achieving their job creation or investment goals as outlined in the investor's I-526 submission.

Should site visits be implemented the rise in denials will increase as of right now USCIS accepts the word of the Centers without actually verifying any of the evidence submitted through a site audit. As we can see from the many regulatory actions and fraud investigations, documents submitted to USCIS can be falsified to show whatever the issuer / GP / developer wishes, but a site visit and/or financial audits may find that all is not as reported leading to an increased number of investor denials and possible termination or other regulatory actions against the Centers.

This does not even take into account projects that fail simply for being poor investments and unable to operate profitably or through mismanagement by the project managers and operators but recommended to them by counsel simply because of a Center's immigration "track record" which was also not verified prior to being issued the recommendation by their attorney. Basing the soundness of an investment on the past performance of an entity's immigration petition approval rate is problematic at best, worse when those claims are not supported by evidence supplied by that entity.

Regardless, the number of EB-5 projects that fail will increase and in turn the investors that have been denied residency and have lost their principal invested will begin to litigate against the attorneys who recommended the Center or project.

For the attorneys who act as agents and promote projects without performing any adequate due diligence on the viability of the investment to secure funding, create jobs or become profitable in the market and act simply as promoters in return for compensation in filling the immigration petitions from that Center; their position in the face of denials and loss of investment, I feel, will be especially difficult to defend.

Several of the Regional Centers are now providing attorneys with "due diligence" reports prepared by salespersons it has contracted with and it calls into question how diligent that review actually is when paid for by the Centers and those same entities receive also commission payments for their recommendations. Attorneys may wish to get an independent opinion from a non-conflicted non-commissioned investment advisor prior to issuing recommendations to their clients or hand off that responsibility entirely to avoid any conflicts of interest or the appearance of giving investment advice something they are neither qualified or licensed to give.

Up until now there has been little evidence of investors suing their attorneys or agents but it is clear to me that hundreds if not thousands of investors in failed projects will soon be left with little choice but to litigate against those they feel are responsible for recommending the failed investment without adequate disclosures, analysis or proper independent due diligence.

One thing is virtually guaranteed from analyzing both current data: EB-5 projects will both succeed and fail. The problem for many immigration attorneys who now recommend investments and Centers to clients is that both the number and the rate of failures will rise substantially as competition for EB-5 capital continues to increase, market demand for the asset is less than projected, expenses are higher, the cost of capital acquisition becomes higher and regulatory supervision and enforcement increase.

The new fallout will be for immigration attorneys who have been recommending EB-5 investments and Centers for years without consequence, based on observable evidence to support these conclusions and as a direct result in the rise in the number of projected project failures and Center terminations.