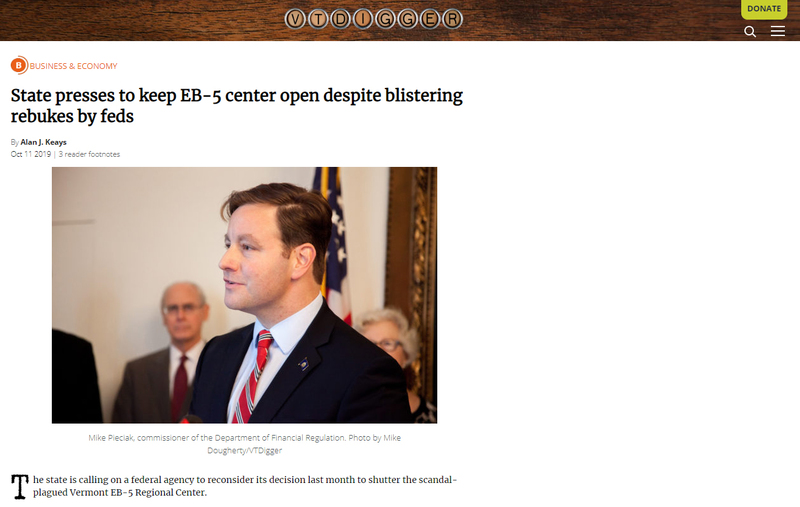 he state is calling on a federal agency to reconsider its decision last month to shutter the scandal-plagued Vermont EB-5 Regional Center.

But, the state isn’t very hopeful that the administrative hearing officer for the U.S. Citizenship and Immigration Services will reverse the scathing ruling that highlighted the fraud in Jay Peak EB-5 developments over several years under the state’s watch.

“We don’t anticipate success on these motions, but we do think it’s important that all of that information is clear in the record,” Michael Pieciak, commissioner of the Vermont Department of Financial Regulation, said Friday.

That includes the most recent economic and job creation activity associated with the projects still under the aegis of the state-run EB-5 regional center, he said.

In addition to Jay Peak-related projects, those developments include ones for Mount Snow, a ski resort in Dover, and the Von Trapp Brewery in Stowe, which are both past the solicitation of investors and construction stages.

The commissioner estimated that as many as 150 EB-5 investors from across all the projects in the state may be at risk of not obtaining their green cards if the center were to close now.

“The main reason for doing it is to make sure their records are as strong as possible,” Pieciak said. He said the state’s action is to protect the interest of those investors.

The most recent numbers the state submitted to USCIS regarding economic activity associated with the projects date back to September 2018, according to Pieciak, which is a little more than a year ago.

Asked what economic activity has occurred with the projects over the past year, Pieciak replied that is information his office is gathering now and will include in its formal motion to reopen the case later this month.

“But we do want to make clear that there’s economic activity that’s occurring,” he said.

Should the USCIS reject the state’s bid to reopen the case Pieciak said the state can file a lawsuit in federal court against the agency.

The decision last month by USCIS to terminate the Vermont EB-5 Regional Center stated, “we conclude that the VRC no longer continues to promote economic growth and does not warrant the preservation of its regional center designation.”

Pieciak said that by filing to reopen the case he hopes to counter that assertion.

He said there is no timeline he is aware of for USCIS to respond to the state’s request for reconsideration.

The center remains open while the state still has appeal rights, the commissioner said.

The commissioner said that he intended later Friday to notify those in charge of EB-5 projects currently under the purview of the state-run center of the decision to seek to have the case reopened.

The von Trapp Brewery under construction.

Pieciak added he is working “collaboratively” with those involved in the EB-5 projects under the state center to ensure that USCIS understands the full effect of closing the regional center.

The investors at risk by the USCIS decision, he said, include those who put money into the Mount Snow and von Trapp projects, as well as a development to build a hotel and conference center at Burke Mountain backed by the Jay Peak developers.

The move to reopen the USCIS case is the latest twist in a long-running back-and-forth by the federal agency overseeing the regional center and the state regarding its continued operation of its EB-5 immigrant investor operation.

The state had argued in its appeal submitted in September 2018 that it should be allowed to wind down the operations of its EB-5 regional center, rather than abruptly close it. The state has also contended it has taken steps to improve its oversight of the regional center and has no plans to take on any other new projects.

The USCIS has responded that there are no provisions for a “wind down” of a regional center as proposed by the state.

Also, the USCIS wrote in its notice of termination in summer 2018, and later its decision rejecting the state’s appeal that the state failed to stop a $200 million fraud in projects headed by Jay Peak developers over nearly a decade.

The decision also cited “material misrepresentations” about the fraud at Jay Peak Resort to investors and the federal government.

Jay Peak developers Ariel Quiros, left, and Bill Stenger were indicted in May.

The Jay Peak developers, Ariel Quiros and Bill Stenger, along with two of their associates, were criminally charged in May with wire fraud and providing false statements to the government related to a failed proposal to build a biomedical research center in Newport.

The criminal charges came nearly three years after federal and state regulators brought civil fraud claims against Quiros and Stenger accusing the two men of misusing nearly $200 million of the more than $350 million they raised for their series of projects at Jay Peak and elsewhere in the Northeast Kingdom.

Both Stenger and Quiros reached monetary settlement in those civil cases brought by regulators, with neither man admitting or denying the investor fraud allegations against them.

More than 800 investors from 74 counties put money into the projects headed by Quiros and Stenger. Investors who put up $500,000 in an EB-5 project are eligible for green cards, or permanent U.S. residency, if their investment leads to the creation of 10 American jobs.

The USCIS, in its decision last month rejecting the state’s appeal, wrote that investors, who relied on representations that the projects had state oversight, had lost confidence in the regional center.

“The lack of confidence in the oversight and monitoring capabilities on the part of the investors and businesses diminishes the ability to promote economic growth,” the decision stated.

The decision by USCIS last month to reject the state’s appeal was followed by more bad news on the EB-5 front for the state last week.

That’s when the Vermont Supreme Court ruled that a group of EB-5 investors could press ahead in their case alleging negligence by the state Agency of Commerce and Community Development for dropping the ball in overseeing the EB-5 regional center.

The decision reversed a lower court ruling tossing out the lawsuit. The high court decision potentially opens the door to millions of dollars in claims against the state as Russell Barr, the attorney for those investors, seeks to make that case a class action.

Just how many millions of dollars that case could potentially cost the state remains an open question – and could be as much as $150 million.

Asked what the state’s total potential monetary liability may be in that case, Gov. Phil Scott, speaking at this weekly press conference Wednesday, replied, “I have no idea.”

He added that the state is self-insured in such cases.

The governor declined to say whether he thought the state should move to settle the case.

“I would love to see us come to conclusion on EB-5,” he added. “And it seems as though with the recent court determination, that we are least narrowing and focusing and getting more towards an end, and that would be preferable from my standpoint.”

Pieciak, also speaking Wednesday at the governor’s press conference, said that about $100 million had been paid out to Jay Peak investors through previous legal settlements.

He added that the state’s potential liability remains unknown until the court-appointed receiver now overseeing the Jay Peak ski resort sells it.

The ski area near the Canadian border is currently on the market and is valued by the town of Jay on its grand list at $124 million. The U.S. Securities and Exchange Commission, during a May 2016 court hearing, valued Jay Peak at $42 million, based on average profits.