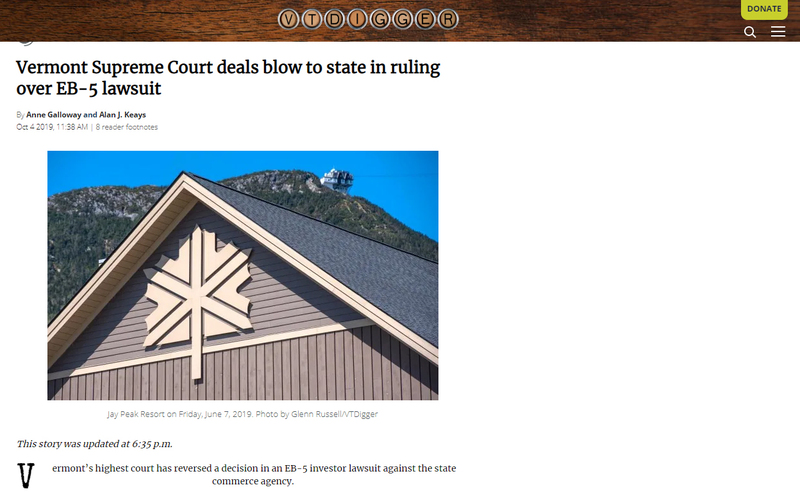 Vermont’s highest court has reversed a decision in an EB-5 investor lawsuit against the state commerce agency.

The state Supreme Court decision issued Friday allows investors to proceed with negligence, breach of contract, and breach of good faith claims against the state Agency of Commerce and Community Development for lax oversight of Jay Peak Resort projects.

“We affirm the dismissal of the negligence claims against the individually named defendants,” the justices ruled. “However, we conclude that plaintiffs have stated claims for negligence and negligent misrepresentation against ACCD and that the Vermont Tort Claims Act waives the State’s sovereign immunity with respect to these claims.”

The lawsuit now goes back to the trial court for an airing of the claims.

Russell Barr, a Stowe attorney representing the investors who brought the suit, said Friday the high court’s decision recognizes the validity of his clients’ claims.

“We’re going to move forward on our case to find out the exact details of what happened and what went on, that’s my charge right now,” Barr said.

He said while there are currently only a handful of named plaintiffs in the case, he is seeking class-action certification to include even more who are ready to join in.

“We have dozens of clients who will be added,” Barr said.

Asked what the total potential damages he is seeking through the lawsuit, Barr termed it “substantial,” adding, “We’re looking into those calculations.”

Vermont Attorney General TJ Donovan, representing the state, said in a Friday statement that the Vermont Supreme Court, in allowing the claims to proceed, wasn’t taking a position on the “accuracy” of the allegations in the lawsuit.

In a later interview, the attorney general said he was “pleased” with the decision in that it would bring “focus” to the issues to be litigated.

“Of course,” he added. “I would have been happy had they agreed with the lower in its entirety, but that’s not what happened so now we go forward.”

Asked if the ruling will prompt settlement talks, Donovan said, “I’m always willing to talk to the other side.”

He did say that the cost of any settlement to the state has risen as a result of the high court ruling. “It does in the sense it would have been zero had we won,” Donovan said. “Now we’re in a changed landscape, I know that, and attorney Barr knows that.”

He said he wasn’t sure what the full potential monetary liability of the case is to the state, and declined to say what the state’s defense would be to the remaining claims.

“I’m not going to litigate the case in the paper,” the attorney general said, adding that it was “too early to say what we’re going to do and not going to do.”

“When ACCD employees induced prospective investors, including plaintiffs, to invest in the Jay Peak Projects by representing that ACCD would provide an unusually high level of oversight over those projects, including quarterly reviews to ensure that projects complied with all applicable laws and regulations, ACCD knew that harm could come to plaintiffs if it failed to follow through on its promises,” the decision stated.

By allegedly failing to provide the promised oversight or compliance monitoring, “ACCD increased the risk of harm to plaintiffs,” according to the ruling.

“Plaintiffs allege that this failure harmed them by leading them to ‘turn over their life savings to the fraud at the Jay Peak Projects,’ which they allege they lost as a result, and by causing them to be ‘displace[d] from their home countries by false promises of permanent residency in the United States,’ the decision stated.

“Accordingly,” the ruling stated, “plaintiffs have made out a facial claim of negligence by ACCD.”

The commerce agency not only endorsed the Jay Peak Projects, the decision said, it also “personally solicited individual investors, and entered into individualized relationships with each of the plaintiffs, who paid substantial fees directly to the VRC [Vermont EB-5 Regional Center] in connection with that relationship.”

The justices wrote that the state EB-5 center influenced “a narrow class of identified people — prospective investors in the Jay Peak Projects.” Those foreign investors from 74 countries relied on “the state’s representations and promised oversight.”

“This is the kind of relationship that can give rise to liability for purely economic harms,” the decision said.

The justices ruled that the plaintiffs have “alleged sufficient facts” to support their claim that the commerce agency offered to undertake specific oversight actions that constituted a contractual obligation.

“For these reasons, we conclude that, unless an exception applies, the Vermont Tort Claims Act waives the State’s sovereign immunity with respect to plaintiffs’ claims,” they said.

The high court ruling comes on the heels of a blistering decision by the federal government earlier this week to permanently close the state-run EB-5 program. The state appealed a 2018 decision to terminate the center. U.S. Citizenship and Immigration Services notified the state Tuesday that it was denying the appeal, finding that the state failed to protect the interests of EB-5 investors from harm.

The Vermont EB-5 Regional Center, a division of the commerce agency, was responsible for supervising the developments in the Northeast Kingdom from 2006 to 2016. During that period, the developers, Ariel Quiros, and Bill Stenger, defrauded more than 800 foreign investors in the projects, misusing $200 million in funds.

Several investors sued in 2017, claiming that the state failed to stop the 10-year fraud. Barr Law Group argued that investors ought to be able to sue the state for negligence, breach of contract and misrepresentations made to investors. The lawsuit leveled gross negligence allegations against Candido and Raymond, the two former directors of the state-run EB-5 program, among other state officials.

The Vermont Attorney General’s Office argued that the state commerce agency, Candido, Raymond and other state officials had sovereign immunity and were not responsible for the fraud at Jay Peak.

Barr, in oral argument before the Vermont Supreme Court in April, took issue with the sovereign immunity claim raised by the state, arguing that Vermont was one of less than a handful of 1,200 EB-5 regional centers across the country that was government run.

Clearly, he told the justices, the state was engaging in a private-sector enterprise where such a defense wouldn’t apply.

“Let’s just think about a private regional center failing to monitor the investment activity … allowing money to misappropriate,” he said during his argument. “Is there a cause of action against those regional centers? Of course.”

The high court, in its decision Friday, cited that private sector activity the state was engaged in allowed Barr to pierce the state’s sovereign immunity defenses, at least in the claims it permitted him to proceed on.

The Vermont Supreme Court, in its ruling Friday, did agree with the earlier lower court decision to dismiss claims against other officials, including Eugene Fullam, the former director of the regional center; Patricia Moulton and Lawrence Miller, former secretaries of the commerce agency; and John Kessler, general counsel for the commerce agency.

A new judge, due to the annual rotation of judicial assignments in September, is now presiding in Lamoille County Superior civil court in Hyde Park, where the case will be pending.

It’s unclear if Judge Nancy Waples, the new presiding judge in that Lamoille County court, will take over the case, or if Carlson will remain on the case.

The next step is likely to be a status conference in which scheduling issues, including setting depositions will take place.

Barr had previously been blocked from deposing state officials as the motion to dismiss was pending and then later ruled on throwing the case out at the trial court level.

The Vermont Supreme Court rulings Friday come about four months after Quiros, Stenger and two of their business partners, William Kelly and Alex Choi, were indicted on federal criminal charges.

The offenses included wire fraud and making false statements to the federal government related to a failed biomedical research facility proposed by the developers for Newport.

In a separate ruling also released Friday, the Vermont Supreme Court rejected a bid by Barr, on behalf of a group of EB-5 investors to intervene in the state’s civil investor fraud case brought three years ago against Jay Peak’s former owner Ariel Quiros and Bill Stenger, the resort’s past president and CEO.

The state had reached a $2.1 million settlement with the two developers, with Quiros agreeing to surrender to the state an estimated $2 million in property with Stenger paying a $100,000.

Barr, in his appeal, argued that he and his firm were in a better position to represent the investors who say they were defrauded by Quiros and Stenger.

The Stowe attorney submitted the filing to intervene in that case shortly before the state announced the settlement last summer.

The high court, in a unanimous decision written by Justice Karen Carroll, wrote that Barr and the investors he represented waited too long to seek status in the case as it neared settlement.

“To whatever extent the other elements of intervention are met here—questions that we do not and need not answer—intervenors could have sought intervention any time after the complaint was filed,” Carroll wrote.

“Intervenors’ interest in intervention did not change when the freeze order went into effect,” she added. “It is apparent that intervenors were aware of the existence of this case for some time and there was nothing precluding them from seeking to intervene much sooner.”

WIth that appeal cleared, Donovan said Friday the state can proceed with selling off Quiros’ properties that were part of the settlement.