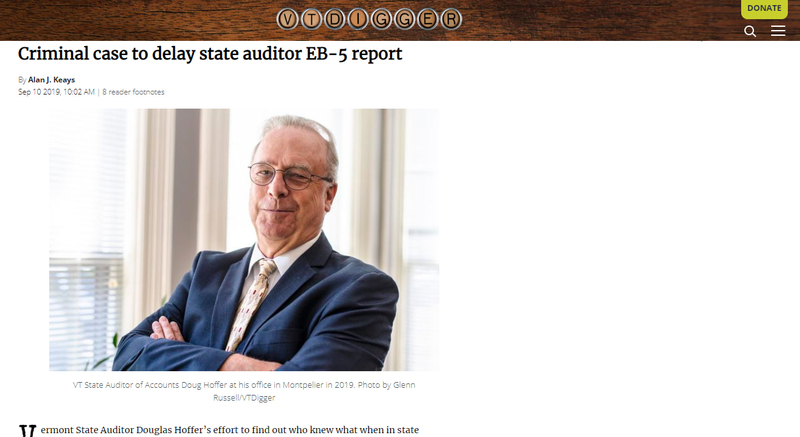 VT State Auditor of Accounts Doug Hoffer at his office in Montpelier in 2019.

Vermont State Auditor Douglas Hoffer’s effort to find out who knew what when in state government related to the EB-5 scandal in the Northeast Kingdom appears to have hit a speed bump.

The Vermont Attorney General’s Office has called on the auditor’s office to wait until the criminal cases brought this spring against the Jay Peak developers, Ariel Quiros, and Bill Stenger, as well as two of their associates, has concluded before interviewing former state EB-5 officials.

A trial in those criminal cases is not set to take place until October 2020, at the earliest.

“You’ve got to let prosecutors go first, the criminal charge goes first,” Vermont Attorney General T.J Donvoan said. “You want the federal investigators and criminal investigators to do their job.”

Donovan said those former state officials, though not named as defendants in the criminal case, are likely to be witnesses and be deposed.

Hypothetically speaking, the attorney general said, if there is more than one statement from a witness, defense attorneys would seek to comb through them seeking any inconsistencies that may exist.

“You don’t want multiple statements out there defense attorneys can say, you said this to one person and you have an inconsistency regardless of how minor that may be in another statement. So you’re building your case. You’re protecting your case.”

It was at a news conference in July 2018 in Newport that state officials, including  Donovan, announced a $2.1 settlement in a state lawsuit brought against EB-5 developers Quiros, Jay Peak’s owner at the time, and Stenger, the resort’s former CEO.

At that same time, Donovan said once that settlement is approved by a judge as well as other civil litigation involving the state had been cleared up, state documents would be provided to Hoffer to conduct an audit to “answer that question of what happened in state government in terms of the management of EB-5.”

A judge still has not formally signed off on the settlement agreement because of an appeal to the Vermont Supreme Court by attorney Russell Barr on behalf of a group of EB-5 investors seeking to intervene in that case.

Now, the criminal cases have been added to the other litigation that must be resolved.

Federal authorities in May brought criminal charges against Stenger, Quiros and two of their associates accusing them of wire fraud and making false statements related to failed biomedical research facility proposed for Newport.

That criminal case has been tentatively set for a trial date in October 2020. Plea deals could be reached and shorten that time frame, though complications could also occur pushing that trial date back.

State officials who had a role in the state’s EB-5 program are mostly now all former state employees.

Hoffer said he is following the advice of the attorney general’s office in delaying interviewing the former state officials until the conclusion of the civil cases as well as the criminal matter.

Hoffer said among the officials he would like to question include Lawrence Miller and Patricia Moulton, both of who served as Agency of Commerce and Community Development secretaries under former Gov. Peter Shumlin.

Also, he said, he would also like to interview former heads of the Vermont EB-5 Regional Center, including Brent Raymond.

Another civil case also needs to be resolved before Hoffer can proceed with talking to those state officials.

In that one, Barr brought a lawsuit in state court on behalf of another group of EB-5 investors in Jay Peak project involving state officials.

Barr accuses state officials in that lawsuit of being complicit, at worst, and negligent, at best, in overseeing the Jay Peak EB-5 projects from 2008 to 2016, allowing the developers, Stenger and Quiros, the opportunity to bilk more than 800 investors.

Judge Thomas Carlson threw that case out, but Barr is appealing and it remains pending before the Vermont Supreme Court.

Hoffer said given so many unknowns in the legal system, it’s impossible to predict when his audit would be complete, though it appears the criminal case will be the last one to be resolved no earlier than October 2020.

All statewide office holders, including Hoffer, are up for election a month later in November 2020.

A database of more than 3 million pages of EB-5 records has been on litigation hold and not publicly available since it was put in place in October 2015 by Bill Sorrell, then Vermont’s attorney general.

Hoffer said his office has received 700,000 EB-5-related documents from the attorney general’s office. The auditor added that his office staff has been going through those documents in separating them into different “buckets,” depending on the topic and relevance to his probe.

“What we have done is review 700,000 files and although it was not easy going in, we did get assurance from the attorney general’s office that we would get everything going in, including attorney client privilege,” he said.

Hoffer said he is working to produce a “descriptive audit,” adding, “There are no objectives other than to just tell the story.”

In addition, the attorney general’s office also couldn’t locate communications between Candido and Douglas Hulme, who worked for Jay Peak as an immigration broker, that VTDigger obtained through a third party.

Hoffer said he would ask the attorney general’s office about those records, but if they can’t be found he would still proceed with his audit.

“What the hell can I do about it,” he added. “If they’re not there, then it’s time to say in the report, ‘We have reason to believe that there’s some things missing and then move on.’ We have to keep working, we can’t just stop. We have a job to do.”