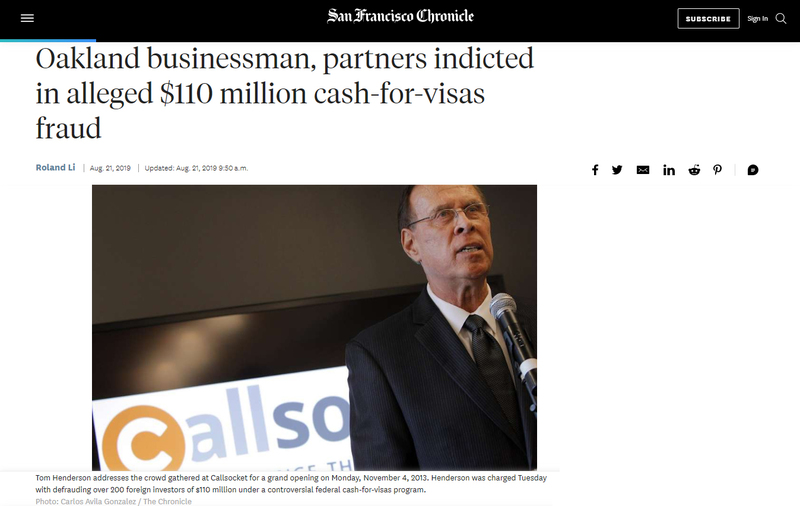 Tom Henderson addresses the crowd gathered at Callsocket for a grand opening on Monday, November 4, 2013. Henderson was charged Tuesday with defrauding over 200 foreign investors of $110 million under a controversial federal cash-for-visas program.

Oakland businessman Tom Henderson, a former owner of the landmark Tribune Tower, was indicted Tuesday on charges of defrauding over 200 foreign investors of $110 million under a controversial federal cash-for-visas program.

Authorities said Henderson, 70, was arrested Tuesday in Oakland and Lee, 42, was arrested in Laguna Beach (Orange County). Hu, 40, of Ningbo, China, has not been arrested. They couldn’t immediately be reached for comment.

After Henderson was arraigned, he was released on a $250,000 unsecured bond, according to Abraham Simmons, a spokesman for the U.S. attorney’s office.

After buying the Tribune Tower in 2011, Henderson promised to create 2,000 jobs in Oakland at call centers, a skilled nursing facility, grocery store, and warehouse, according to news reports at the time. He amassed a real estate portfolio over several years that included multiple buildings in downtown Oakland. Henderson raised money through the EB-5 visa program, which enables wealthy foreigners to obtain U.S. green cards if they invest $500,000 or more in low-income areas and create 10 permanent jobs.

Instead, federal authorities said, Henderson and his partners diverted millions to enrich themselves and fund money-losing operations.

The EB-5 program, which has been popular with Chinese investors, has led to numerous cases of alleged fraud, including a $50 million scheme in Los Angeles and a more than $350 million ski resort project in Vermont. The government amended the program in response to problems. Those changes go into effect in November, including raising the minimum investment amounts to $900,000 and restricting which areas qualify.

“This case serves as a clear warning to all criminals who seek to profit off of the United States’ legal immigration system,” Tatum King, special agent in charge at Immigration and Customs Enforcement's Homeland Security Investigations division, said in a statement. “We will locate, arrest, and aid in their prosecution in order to recoup any and all illicit gains,”

Henderson is scheduled to appear in federal court on Oct. 1. Lee’s court appearance hasn’t been scheduled.

Henderson no longer owns the Tribune Tower, which was sold off by a court-appointed receiver to Harvest Properties in late 2016 for $20.4 million, in an effort to help pay back Henderson’s investors. In January, Highbridge Equity Partners bought the tower for $48 million.