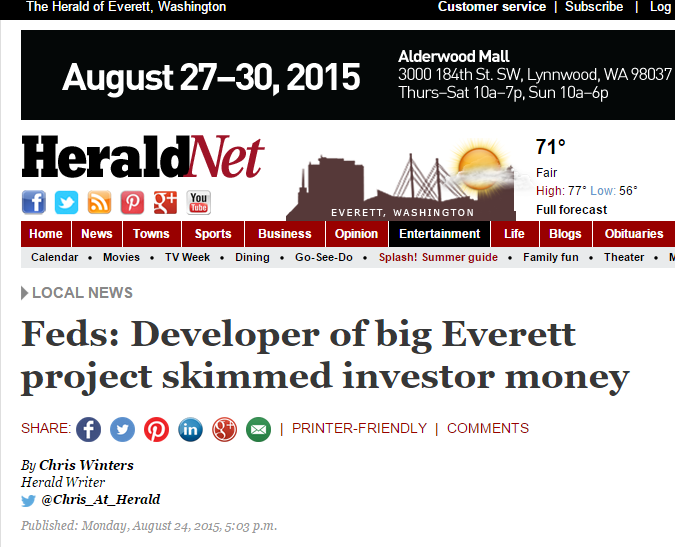 The developer of a hotel, apartment complex and farmer's market in downtown Everett is under investigation by the federal government for allegedly bilking overseas investors out of millions of dollars.

Lobsang Dargey, the CEO of Path America and the builder of the Potala Place development, is being sued in federal court by the U.S. Securities and Exchange Commission. 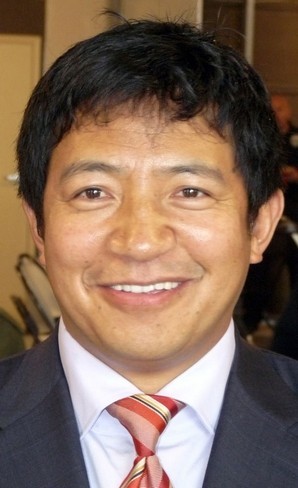 The civil complaint, filed Monday in U.S. District Court in Seattle, says Dargey fraudulently raised more than $125 million through sales of securities to at least 250 investors.

In particular, funds raised for downtown Everett's Potala Place building and the 40-story Potala Tower skyscraper in downtown Seattle allegedly were misappropriated, sometimes redirected to other projects. The government also contends money was diverted to buy a luxury home in Bellevue and make cash withdrawals, including at several casinos.

Potala Place, which occupies half a block at Grand Avenue and Wall Street in Everett, has not opened. It is a 220-unit apartment building with 60,000 square feet of retail space, including the Potala Farms boutique grocery-cum-farmer's market.

Potala Tower has broken ground, but a web camera feed on the project's Web page just shows a hole in the ground with some construction equipment.

A message left for Lobsang Dargey was not immediately returned Monday.

Everett Mayor Ray Stephanson could not be reached for comment.

Everett Chief Administrative Officer Debra Bryant said she had not heard about the complaint until contacted by a reporter.

“I think it's too soon to make any determinations on the impact of that,” Bryant said.

Path America is a highly visible local example of how the government's EB-5 visa system works. Foreign nationals who invest at least $500,000 in a project that generates or preserves at least 10 jobs for U.S. workers may qualify for residency in the United States.

Dargey and Path America used the EB-5 system to raise money from Chinese investors by encouraging them to invest in Potala Place and Potala Tower.

However, the suit alleges that of the $125 million raised, $17.6 million has been misappropriated.

Among the charges: $14.7 million has been used in separate real estate projects under Dargey's control — Potala Shoreline LLC and Potala Village Kirkland LLC. Those projects are not eligible for the EB-5 visa program.

Dargey also is accused of using $2.5 million in investor funds to purchase a home for himself in Bellevue and making cash withdrawals of about $350,000. More than $200,000 of the money was withdrawn at 14 different casinos in Washington, Nevada, California and British Columbia, according to the complaint.

Dargey allegedly promised his backers that their investments would make them eligible for U.S. residency. He failed to reveal that those investments would not qualify under the EB-5 program if they weren't used for those dedicated projects, federal officials say.

Details are provided in the complaint and hundreds of pages of supporting documents. Among other things, they show that each investor who bought a $500,000 partnership interest in either of the two Path America projects also was charged a $45,000 administrative fee. The investment capital was wired to an escrow account in the U.S. while the administrative fee was wired to an account in Hong Kong.

Backers were told that the capital raised for the Everett project also would be invested in Everett Hospitality Co., the Dargey-controlled company that built the new 122-room Hampton Inn in Everett next to Potala Place. The hotel opened in 2014.

According to the complaint, on Sept. 9, 2014, Dargey transferred $1.5 million from the account for the Potala Tower project in Seattle to an account in the name of Dargey Development, another company which he controls.

The next day, Dargey transferred another $1 million from the Potala Tower account directly into an account controlled by Dargey and his wife, Tamara Agassi Dargey, according to the complaint.

Then on Sept. 14, 2014, Dargey used nearly $2.5 million from the account in his and his wife's names to purchase a home in Bellevue. The purchase was made in the name of Bellewood Farms Trust, the beneficiaries of which are the Dargeys.

Tamara Agassi Dargey is the sister of tennis star Andre Agassi. She is not named as a defendant in the suit.

The suit also alleges that Dargey withdrew about $350,000 in cash from both the Potala Tower and Potala Place accounts between October 2012 and June 2015, mostly with a debit card or at a bank or casino teller.

From 2012-15, Dargey allegedly diverted $7.5 million from the Potala Farmer's Market and Potala Tower accounts to an account in the name of Potala Village Kirkland.

In 2014 and 2015, Dargey also shifted a total of $7.2 million from the Potala Tower to purchase property in Shoreline, the complaint alleges.

The Securities and Exchange Commission has asked a federal judge to approve a restraining order prohibiting Dargey or his companies from raising more money from investors, selling any securities of any business interest they own, and freezing all their assets.

The government also is seeking an accounting of all money received from investors, an order prohibiting the alteration or destruction of books and records, an order to return any investors' funds that have been transferred overseas back to the United States and unspecific civil monetary penalties.