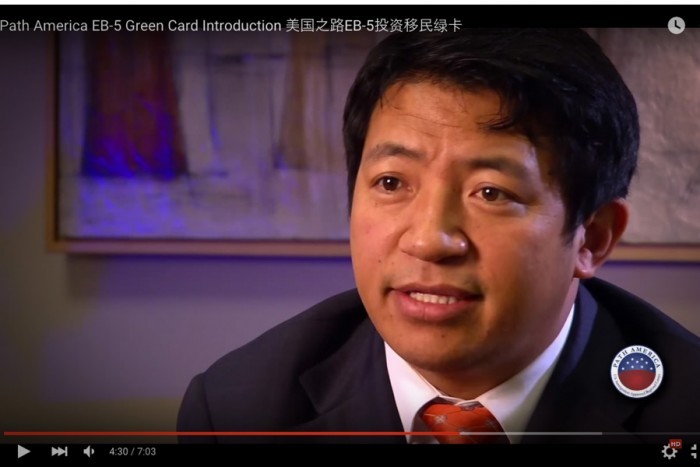 A Seattle-area developer who once was a Tibetan Buddhist monk is accused in a lawsuit by the U.S. Securities and Exchange Commission of defrauding Chinese investors seeking U.S. residency through a controversial visa program.

Lobsang Dargey is the CEO of Path America, a development firm that has worked on several properties in Everett including the Everett Public Market and Chicago Title Building, and has projects planned for Kirkland and Seattle.

The company woos investors hoping to take advantage of the U.S.’s EB-5 immigrant program, which gives green cards to foreign nationals who make major investments in commercial enterprises that create or preserve at least 10 jobs for U.S. workers. Applicants in the program must invest at least $1 million, or $500,000 in a rural area or an area with high unemployment. Path America says all its projects qualify in the latter category.

The website for Path America touts its status as a federally designated company where EB-5 investors can pool their money for larger investments.

The company, which has offices in Everett, Bellevue and Beijing, also advertises on its website that it offers investors personalized help adjusting to the immigration process.

“We offer resources to aid families as they adapt to living in a new country,including education information, immigration process status, links to community services and groups, and the best legal team for both immigration and business real estate transactions. Additionally, we are the only regional center that provides full concierge services in your native language,” says the Path America website.

The SEC filed a lawsuit against Dargey and Path America in U.S. District Court for the Western District of Washington, and a judge ordered a freeze on the company’s assets and prohibited the recruitment of additional investors.

According to SEC investigators, about 250 investors in China put money into Path America company for projects in Everett and Seattle. The immigration rules calls for 10 jobs to be created from each investor. The SEC alleges that of the $125 million raised, Dargey moved about $14 million into real estate projects unrelated to the regional center, and diverted about $3 million for personal use, including the purchase of a $2.5 million Bellevue home and just over $200,000 withdrawn from casinos in Washington, California and Las Vegas.

Several business profiles of Dargey over the years tout his personal story of transitioning from a Buddhist monk to a developer in Seattle’s real estate market — and most articles also note that his wife, Tami, who he met at a fundraiser for the Marsha Rivkin for Ovarian Cancer Research, happens to be the sister of tennis great Andre Agassi.

According to his profile on Path America’s website, Dargey, worked on his first buildings at 14, designing temples and stupas for monasteries in Tibet and India.

Dargey immigrated to the United States in 1997 barely speaking English, and started his first company as a house painter, according to a 2014 profile in the Puget Sound Business Journal. He then took a sales job at Sprint, where would switch between wearing business suits and monks robes to work, according to a 2012 Seattle Times profile. Dargey left Sprint and started Path America in 2009.

Dargey left the monastic life during his time at Sprint, and while he no longer is a monk, his developments in Kirkland and Seattle are named after the Dalai Lama’s winter residence, Potala Palace.

Path America has not yet returned The Seattle Globalist’s phone message asking for comment.

Path America’s website puts the EB-5 program front and center, touting the advantages of immigrating under the program, including an expedited green card process and a path to residency that is open to retirees, who often are ineligible for U.S. residency under other work programs.

Path America is one of 44 approved regional centers in Washington state, according to the U.S. Citizenship and Immigration Services website.

The department notes on the website that regional centers can be terminated for lack of compliance or if jobs aren’t created, and investors in the terminated centers cannot use that investment to establish eligibility for immigrant status.

The USCIS declined to comment on Path America, citing the SEC’s pending lawsuit.