Investors and state square off over EB-5 lawsuit 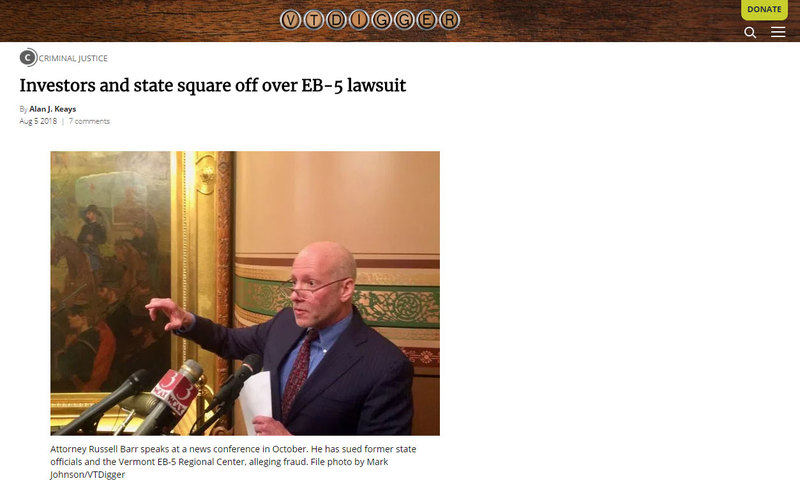 A group of investors says the federal government’s shutdown of the Vermont EB-5 Regional Center rejuvenates their case against the state.

The U.S. Citizenship and Immigration Service determined last month that the center must be closed because state officials made material misrepresentations about the fraud at Jay Peak Resort to investors and the federal government.

The investors’ attorney, Russell Barr, of Barr Law Group in Stowe, says high-level Shumlin officials not only made misrepresentations but also perjured themselves in statements to the USCIS.

The document makes “clear that Vermont state officials failed to follow federal laws and regulations, diverted investor funds and committed perjury to the federal government in their operation of the Vermont Regional [EB-5] Center,” Barr said. “There is now no reasonable question that certain State officials are responsible for their decade-long Ponzi-scheme that looted hundreds of millions of dollars from immigrant investors.”

Barr, who has appealed Carlson’s ruling, is asking the Supreme Court to send the case back to the lower court.

The state is fighting Barr’s bid to send the case back to the trial court. In April, Carlson sided with lawyers from the Vermont Attorney General’s Office, which argued that the state has absolute immunity from the lawsuit.

The investors accuse state officials of negligence, wholly inadequate oversight and actions that gave the Jay Peak developers the opportunity to bilk more than 800 investors of more than $200 million in EB-5 money from 2008 to 2016.

The fraud occurred under the noses of high level Shumlin administration officials who were warned about financial improprieties as early as 2012. Regional center and commerce agency staff did not take action to stop the fraud. Investors were lured into the scheme as late as March 31, 2016, just two weeks before the Securities and Exchange Commission brought 52 counts of securities fraud against Bill Stenger, the former CEO of Jay Peak, and Ariel Quiros, the former owner of the resort. Both men have since settled with the U.S. Securities and Exchange Commission and settlements with the state are pending a judge’s approval. A criminal investigation is ongoing.

The USCIS decision “cast serious doubt,” Barr writes in a filing with the Supreme Court, on Judge Carlson’s findings in the dismissal. The federal shut down of the center creates a “solid basis for [the judge’s] redetermination,” Barr wrote.

The Vermont Attorney General’s Office is appealing the USCIS decision. Gov. Phil Scott, a Republican, and Democrats from the former Shumlin administration have proposed a gradual wind down of the program — in defiance of the federal agency’s ruling.

The state’s lawyers have argued that commerce agency workers and others were acting in good faith and were simply carrying out their duties.

State officials approved eight projects Stenger and Quiros solicited to investors from more than 74 countries oversees. The regional center staff, Gov. Shumlin, Sen. Patrick Leahy, Rep. Peter Welch, traveled in Asia to promote the projects, which included a biomedical facility in Newport that never got off the ground, a massive expansion of Jay Peak Resort, and the overhaul of Burke Mountain Resort.

The Vermont Attorney General’s office has contested the idea that state officials engaged in any illegal activity.

TJ Donovan, the Vermont Attorney General, has said that he isn’t aware of any state employee who “committed intentional fraud,” adding, “I would challenge anyone to produce that evidence.”

Vermont Solicitor General Benjamin Battles said USCIS had already provided the state with a notice of intent to terminate the regional center well before the judge tossed the investors’ case out of court. Battles said the notice issued in August 2017 had many of the same allegations as the letter sent last month.

“As a legal matter we don’t think the recent termination notice changes the basis for the Superior Court’s decision,” Battles said.

The USCIS assertion that state officials made material misrepresentations, however, are new.

Battles wrote that “nothing in the federal government’s recent termination notice calls the superior court’s legal conclusions into question.”

Rather than a “paradigm shift,” Battles calls the notice to terminate “the latest exchange in an ongoing dispute” between the state and the federal agency.

Extending the litigation would “prejudice our clients when we know they have a valid defense to the claims” and expose them to “baseless” allegations, Battles continued.

Five EB-5 investor plaintiffs have brought the suit against the state of Vermont and 10 current and former state officials.

Those 10 individual defendants, who are or were state officials, are James Candido, Brent Raymond and Eugene Fullam, the former directors of the regional center; Joan Goldstein, the interim director of the center; William Carrigan, deputy commissioner of the Securities Division; Michael Pieciak and Susan Donegan, the current and former commissioners of the Department of Financial Regulation; Patricia Moulton and Lawrence Miller, former secretaries of the commerce agency; and John Kessler, general counsel for the commerce agency.