EB-5 has helped fund development in Milwaukee, but changes loom

When Irgens Partners LLC began working on financing the $132.6 million BMO Harris Financial Center the company is developing in downtown Milwaukee, it found the marketplace did not have a huge appetite to take on a loan of that size.

BMO Harris Bank, which will be the namesake of the 25-story office tower and its anchor tenant, occupying the building’s first and 11th through 16th floors, agreed to provide a loan. But the loan amount was not enough to cover the entire cost of construction.

EB-5 funding is being used to fill a financing gap for the BMO Harris Financial Center.

FirstPathway Partners is now working with Irgens to raise $17 million in EB-5 financing for the project, which will reduce the mortgage term loan and replace $6 million of equity. Irgens is not getting any city assistance to finance the new office tower.

“(FirstPathway is) raising the money now and we have structured it so they have two years to bring it into the project,” said Duane Nolde, executive vice president of real estate finance at Irgens.

Rob Oldenburg, vice president of development at Irgens, said the more Irgens learned about FirstPathway Partners, the more it became clear that it and the EB-5 program was the best option to fill the funding gap for the BMO tower.

“We loved that this was a local company finding investors for a local project,” Oldenburg said. “So far, we have been very pleased.”

The EB-5 program provides green cards for foreign investors that make an investment that creates jobs in the United States. Under the program, FirstPathway Partners works with investors in 38 countries who invest at least $500,000 in a project in exchange for temporary green cards for themselves and their families (children up to age 21). Their investment has to produce 10 jobs in the United States within two years in order for them to get a permanent green card or citizenship.

EB-5 was created by Congress in 1990 as a way to stimulate the U.S. economy through job creation and capital investment by immigrant investors.

International businessman and entrepreneur Robert Kraft established FirstPathway Partners in 2007. It was one of the first 20 EB-5 regional centers. Today, there are more than 900 centers nationwide.

Several real estate development projects in Milwaukee have been financed at least in part by the EB-5 program. But since about 2011, growth in the number of regional EB-5 centers across the country has had an adverse effect on mid- to small-sized cities, such as Milwaukee, as developers in Los Angeles and New York have discovered the program and used it as part of their capital stack.

The problem is there are only 10,000 visas available per year and more than a quarter of them are going to projects in Manhattan, which is not following the original spirit of the law, Kraft said.

The number of visas is not the number of investments being made. Most investors apply for three visas, so there is an average of 3,333 investments per year, totaling $1.6 billion nationwide.

FirstPathway Partners’ work can be seen all over the region. EB-5 funds helped develop the Aloft, Marriott and Kimpton Journeyman hotels in Milwaukee, the Global Water Center in Walker’s Point, the Hampton Inn in West Allis, UWM Innovation Campus in Wauwatosa and DeltaHawk Engines expansion in Racine. 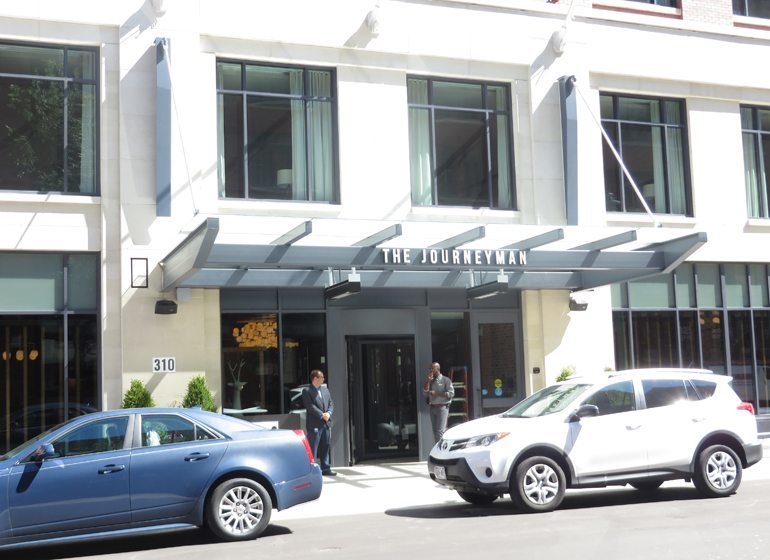 The Kimpton Journeyman Hotel in Milwaukee’s Historic Third Ward was developed with some EB-5 funding.

Three of those projects, the Aloft, DeltaHawk and UWM research park, have gone full cycle, with investors already receiving their return.

“There are fewer than 10 centers in the country that have returned money to investors,” Kraft said.

The success of FirstPathway Partners has not gone unnoticed; Kraft was recently elected to serve as board chair of IIUSA, the national membership-based not-for-profit industry trade association for the EB-5 Regional Center Program.

With his role at the national level, Kraft has been able to oversee Congressional changes that have been discussed concerning the EB-5 program.

The United States Senate Judiciary Committee held a hearing in June to discuss programmatic reform, which would include increasing the immigrant investment from $500,000 to $1.35 million by the end of September.

“Doing so would kill the program,” Kraft said, adding that he would be OK with raising the minimum to $800,000 to keep up with inflation.

Another consideration is to tighten the target employment area. For an investor to be eligible for the EB-5 visa, the project has to be in an area that has an unemployment rate of more than 150 percent of the national average calculated by the Bureau of Labor Statistics.

In Milwaukee, nearly every project meets the target under the current area calculations.

Because of the economic impact the EB-5 program has created, lawmakers from both parties, including Sen. Ron Johnson (R-Oshkosh), Rep. Gwen Moore, (D-Milwaukee), and House Speaker Paul Ryan (R-Janesville) have supported the program, Kraft said.

FirstPathway Partners and all of the regional centers would like to see more visas added, which is unlikely given the current political climate, he said.

Kraft also hopes Congress does not make any changes that will kill a program that has brought so much value to so many cities.