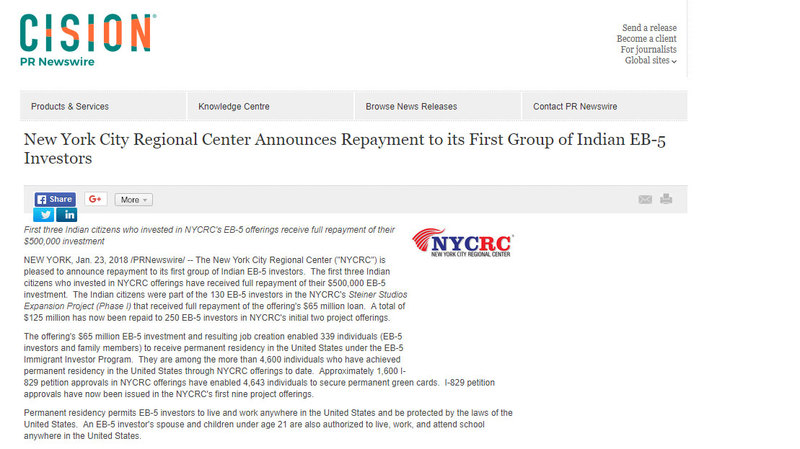 The offering's $65 million EB-5 investment and resulting job creation enabled 339 individuals (EB-5 investors and family members) to receive permanent residency in the United States under the EB-5 Immigrant Investor Program. They are among the more than 4,600 individuals who have achieved permanent residency in the United States through NYCRC offerings to date.  Approximately 1,600 I-829 petition approvals in NYCRC offerings have enabled 4,643 individuals to secure permanent green cards.  I-829 petition approvals have now been issued in the NYCRC's first nine project offerings.

"We are very pleased that the first three Indian citizens who invested in NYCRC offerings have received full repayment of their $500,000 EB-5 investment," said Paul Levinsohn, Managing Principal of the NYCRC. "The NYCRC takes seriously our role in spurring job creation and economic development as well as our responsibility to assist our EB-5 investors and their families achieve their immigration goals.  This is an exciting achievement for the NYCRC and, of course, for our first Indian investors. We look forward to assisting many more Indian citizens in the future."

The Indian citizens who received full repayment of their EB-5 investment helped finance the expansion of Steiner Studios, the largest film and television studio complex in New York City. Steiner Studios is located in the New York City-government owned Brooklyn Navy Yard. The EB-5 capital was used to increase production capacity at Steiner Studios and further reinforce the Brooklyn Navy Yard as a central location for media production in New York City. In a city where space is at a premium, the construction of studio facilities is necessary for the film and television industry to continue to create new jobs. The NYCRC was selected to provide capital to assist with the continuation of this effort.

The NYCRC was approved by the United States Citizenship and Immigration Services in 2008 to secure foreign investment for real estate and infrastructure projects under the EB-5 Immigrant Investor Program. The company was the first EB-5 regional center approved in New York City. To date, the NYCRC has secured approximately $1.5 billion of capital for 21 economic development projects in Brooklyn, Queens, Manhattan, and the Bronx.  Examples of projects utilizing loans provided by NYCRC-managed funds include the following:

In addition to fueling economic development, NYCRC offerings have enabled over 4,600 individuals to become permanent residents of the United States through the EB-5 Immigrant Investor Program.