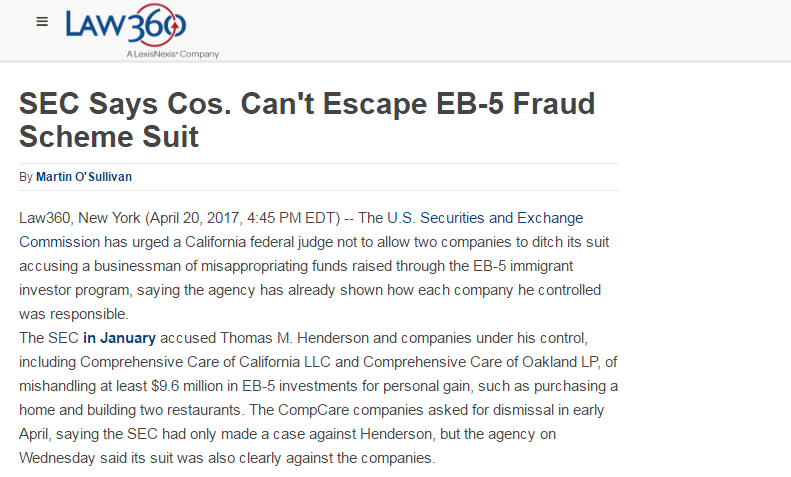 The U.S. Securities and Exchange Commission has urged a California federal judge not to allow two companies to ditch its suit accusing a businessman of misappropriating funds raised through the EB-5 immigrant investor program, saying the agency has already shown how each company he controlled was responsible.

The SEC in January accused Thomas M. Henderson and companies under his control, including Comprehensive Care of California LLC and Comprehensive Care of Oakland LP, of mishandling at least $9.6 million in EB-5 investments for personal gain, such as purchasing a home and building two restaurants. The CompCare companies asked for dismissal in early April, saying the SEC had only made a case against Henderson, but the agency on Wednesday said its suit was also clearly against the companies.

“The complaint plainly alleges the ‘who, what, when, where and how’ of the fraudulent conduct by the CompCare defendants,” the SEC said.

The SEC said that U.S. District Judge Richard Seeborg had already rejected CompCare’s argument in March when he issued a preliminary injunction barring Henderson and his companies from issuing securities or destroying documents.

The suit alleges Henderson, 68, used CompCare and other companies under his control to commingle funds from the EB-5 projects to "mask" the true sources of the funds, according to the SEC.

From September 2010 through at least October 2016, Henderson sought investments for seven EB-5 projects — a skilled nursing facility, three call centers, a warehousing business, a retail grocery and restaurant business, and a dairy processing business — according to the complaint.

Henderson raised at least $115 million from about 215 investors, mostly Chinese nationals who contributed $500,000 each to fund one of the seven projects, according to the SEC.

The investors believed they were participating in the EB-5 program, which provides a means for foreign nationals to qualify for permanent residency in the U.S. if they make a qualified investment of $500,000 or more in a project that creates or preserves 10 or more jobs for U.S. workers.

But rather than use these investor contributions for the projects, Henderson commingled the investment with revenue from his company accounts for personal gain, according to the SEC. For example, the businessman used $346,000 of investor funds to purchase a $1.4 million home in Oakland, used $3.8 million of the funds to build and operate two restaurants in Oakland, and used $5.1 million from commingled funds for other unrelated business ventures, the SEC said.

CompCare is represented by Yosef Peretz of Peretz & Associates.