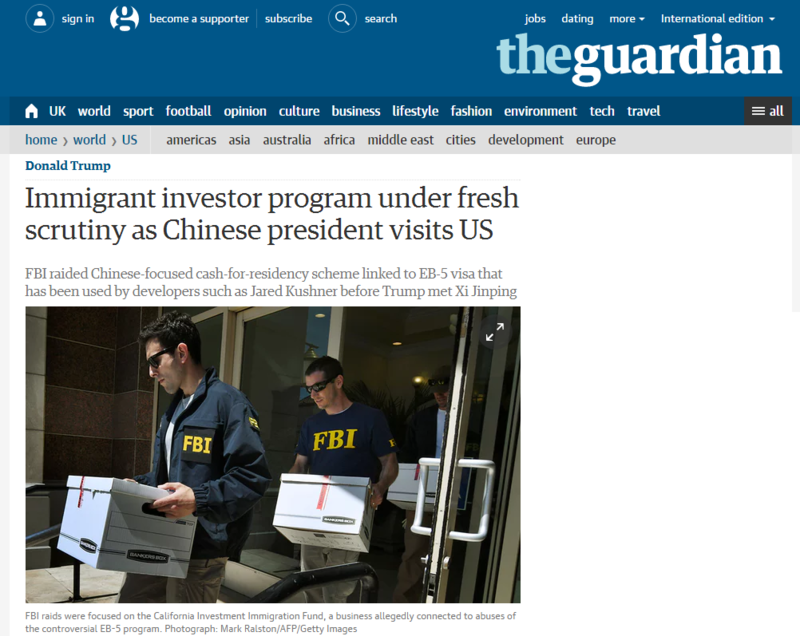 The timing could not have been worse – or better, depending on whose side you are on. On Wednesday, the day before Donald Trump met Chinese president Xi Jinping at Trump’s Florida Mar-a-Lago estate, law enforcement swooped on a Chinese-focused cash-for-residency scheme that highlights a controversial business investment used by the president’s son-in-law.

The FBI raids, conducted on a series of locations in the San Gabriel Valley in California, were focused on California Investment Immigration Fund, a business allegedly connected to abuses of the controversial EB-5 Immigrant Investor Program that has in recent years fueled a high-end US residential boom and has been widely used by developers including the president’s son-in-law and adviser, Jared Kushner.

Almost 85% of EB-5 allocations come from China – the programme has ballooned in recent years as the wealth of China’s middle class has grown. In 2005 just 350 visas were granted under EB-5; by 2015 the number was 9,500, according to figures cited by the FBI.

The money has been used to finance some high-profile developments. One of the largest projects to take EB-5 cash is the $4.9bn Atlantic Yards development in Brooklyn, renamed Pacific Park in 2014 after the Chinese government-owned Shanghai Greenland Group bought a 70% stake in 15 residential towers under development.

But the explosion of the programme’s popularity – the number of applicants vying for the annual allotment of 10,667 visas roughly doubles year-on-year – comes with repeated warnings that the programme has grown far beyond its intended use and should be cancelled.

“The EB-5 program has been rife with fraud and national security weaknesses,” said Republican senator Chuck Grassley of Iowa, who introduced a bipartisan bill to eliminate EB-5 earlier this year. “It has also strayed from Congress’ original intent to spur economic development in rural and depressed areas.”

A paper submitted by Texas lawyer Shae Armstrong to the Center for Immigration Studies alleged that secret commissions paid from US projects to Chinese state-run EB-5 agents may violate the Foreign Corrupt Practices Act.

According to Armstrong, EB-5 abuses are not confined to individual investor abuse but now includes entities under foreign-government control.

“This is a program intended to benefit immigrants, developers that can’t find financing any other way, and economically distressed and rural areas, yet the Chinese government is the most significant beneficiary,” Armstrong told the Guardian.

“It’s not the intent of the program, so why is a Chinese state-owned developer receiving the benefits?”

Despite the warnings, the programme remains an important conduit for Chinese nationals to export capital from mainland China and obtain US residency, as well as for US developers looking to secure second-round funding for real estate projects. But a mounting number of EB-5 deals are also floundering. 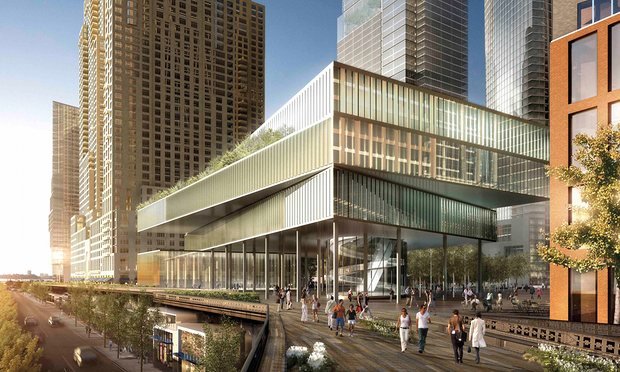 Other large-scale EB-5 projects that Chinese investors have funded are Resorts World Las Vegas, New York’s Hudson Yards and 2 World Trade Center developments, and Century Plaza in Los Angeles, according to a report from the Center for Real Estate Finance Research at New York University.

Invest in the USA, a Washington-based thinktank advocating for the continuation of EB-5, estimates the program has generated $16.8bn in direct foreign investment between 2008 and 2016. Other advocacy groups, including the Rosen Consulting Group, estimate that $9.5bn of Chinese investment in EB-5 has entered the US since 2011.

Officially, the Chinese government has never recognized EB-5 or commented on the wealth leaving China through it. But analysts contend that official support for the program is demonstrated by the registration of EB-5 agents with the exit-entry bureau.

While EB-5 appears likely to be extended by Congress over the next few weeks, the investment threshold from applications raised from $500,000 to $1.35m, Chinese investment managers have called for clarification that their investors will be protected even under rule changes.

Chinese money managers argue that since investors have little access to preview their investments, and could be subject to investment scams, EB-5’s current focus on high-end properties is justified.

In 2013, a report by the Department of Homeland Security concluded that US Citizenship and Immigration Services is “limited in its ability to prevent fraud or national security threats that could harm the US”.

It continued that immigration service “cannot demonstrate that the EB-5 program is improving the US economy and creating jobs for U.S. citizens as intended by Congress”.

The raids in California could serve to bolster claims that the programme is subject to widespread corruption. In its affidavit, the FBI claims the alleged masterminds of the scheme – Victoria Chan, an attorney; Tat Chan, her father; and Fang Zeng, a friend – diverted $15m of $50m raised in China to finance a luxurious life of multimillion-dollar homes and expensive cars.

“No real construction took place at any of the proposed project locations and very few, if any, actual full-time American jobs were created,” an FBI agent claimed.