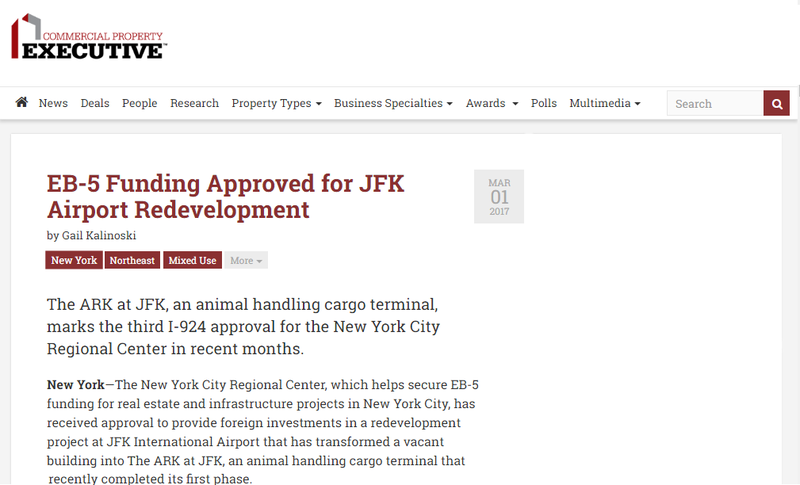 The New York City Regional Center, which helps secure EB-5 funding for real estate and infrastructure projects in New York City, has received approval to provide foreign investments in a redevelopment project at JFK International Airport that has transformed a vacant building into The ARK at JFK, an animal handling cargo terminal that recently completed its first phase.

Paul Levinsohn, co-managing principal of the NYCRC, said the United States Citizenship Immigration Services (USCIS) issued an I-924 petition approval for its JFK redevelopment project involving Building 78, a 172,165-square-foot facility on a 14.4-acre site that is now providing space to support general cargo operations and the agricultural industry at JFK Airport.

“This is an important milestone for a key redevelopment project in the city’s largest airport,” Levinsohn said of the I-924 petition approval.

The NYCRC did not provide details on how much capital it was securing for the $65 million project that opened its first phase in mid-February. The ARK at JFK, a privately-owned business that has a 30-year lease with the Port Authority of New York & New Jersey, is offering The ARK Pet Oasis, Equine & Livestock Export Center and Aviary In-Transit Quarantine services. Phase 2, which will include a full-service ARK Import-Export Center, will be completed by the second quarter. The entire facility will be operating by the summer and include services provided by sub-tenants such as a full veterinary clinic, blood laboratory and pet boarding and grooming facility.

Racebook Capital announced the plan to build The ARK at JFK in January 2015. Racebook CEO John Cuticelli Jr., who is the founder & chairman of ARK Development/The ARK at JFK, said the facility would address unmet needs for the import and export of companion, sporting and agricultural animals.

“Our goal is to create a more efficient and safe process by reducing the need for additional travel and offering trained animal care staff immediately pre- and post-flight. The ARK provides a healthy and comfortable environment, and sets new international airport standards for comprehensive veterinary, kenneling and quarantine services,” Cuticelli said in a prepared statement about the opening of the first phase.

For NYCRC, The ARK at JFK was the third I-924 approval the group had received in recent months. It has also been given approval for Phase II of the New York City wireless infrastructure project for the NYC subway system and for Phase III of the continued redevelopment at the Brooklyn Navy Yard. The NYCRC has provided EB-5 capital totaling $339 million to help fund seven projects at the Brooklyn Navy Yard, including renovation of a 215,000-square-foot industrial building now known as the Green Manufacturing Center, and various infrastructure and building improvements and new construction. NYCRC has also funded $145 million to help expand Steiner Studios. Another $12 million of capital helped construct an 84,000-square-foot high-tech manufacturing facility.

In December, the NYCRC announced one EB-5 loan for $60 million that was used for Phase I of the Brooklyn Navy Yard redevelopment was repaid.

To date, the NYCRC has secured approximately $1.3 billion of EB-5 capital for 21 economic development projects throughout New York City. The NYCRC, the first EB-B regional center to operate in New York City, was approved by the USCIS in 2008 to secure foreign investment for real estate and infrastructure projects in Brooklyn, Queens, Manhattan and the Bronx. The NYCRC capital offerings have enabled over 2,400 individuals to become permanent U.S. residents through the EB-5 Immigrant Investor Program. It has received several short-term extensions over the last 18 months but is due to expire on April 28 unless new legislation is passed.