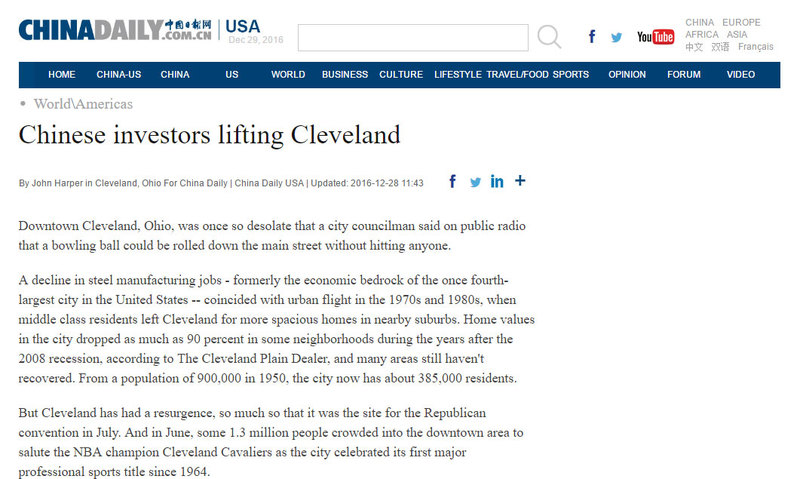 Downtown Cleveland, Ohio, was once so desolate that a city councilman said on public radio that a bowling ball could be rolled down the main street without hitting anyone.

A decline in steel manufacturing jobs - formerly the economic bedrock of the once fourth-largest city in the United States -- coincided with urban flight in the 1970s and 1980s, when middle class residents left Cleveland for more spacious homes in nearby suburbs. Home values in the city dropped as much as 90 percent in some neighborhoods during the years after the 2008 recession, according to The Cleveland Plain Dealer, and many areas still haven't recovered. From a population of 900,000 in 1950, the city now has about 385,000 residents.

But Cleveland has had a resurgence, so much so that it was the site for the Republican convention in July. And in June, some 1.3 million people crowded into the downtown area to salute the NBA champion Cleveland Cavaliers as the city celebrated its first major professional sports title since 1964.

Cleveland has transitioned from a manufacturing center to a more service-based economy. Occupancy rates in apartment buildings have climbed more than 90 percent, and the downtown area is home to more than 20,000 full-time residents.

Real estate developers say the city's resurgence might not have happened if they had not received some timely assistance - money - that has come largely from Chinese immigrant investors and the EB-5 visa program.

EB-5 was created to stimulate the US economy through job creation and capital investment. It targets foreign investors who put at least $500,000 in a project that creates a minimum of 10 jobs in an economically depressed region. In return, the investors receive a two-year visa with a good chance of obtaining permanent residency for themselves and their families. In 2014, the US issued more than 10,000 of the visas and about 85 percent went to applicants from China. This month, Congress approved a measure to continue funding the program until April 2, 2017, when changes are expected to be made to the program.

The Cleveland International Fund is one of several regional centers in the US designated by US Customs and Immigration to direct EB-5 investments. Of eight projects built at a total cost of $2.3 billion, the fund claims that foreign investors have provided more than $220 million, and of that amount, Chinese immigrants have been responsible for roughly 85 percent, according to Cleveland International Fund CEO Stephen Strnisha.

"We're typical to a lot of regional centers that we have secured a large majority of our investors from China," Strnisha said. The fund operates an office on Nanjing Road in one of Shanghai's international shopping districts.

Strnisha said that EB-5 financing was a key element for an office building and hotel becoming a reality. That money has flowed into not only the East Bank offices and hotel, but also into a $70 million renovation that created a 484-room Westin Hotel, two blocks from City Hall. EB-5 financing also provided $13 million for one of the city's most ambitious historic renovations, the Ninth and Euclid project, which saved a vacant 29-story skyscraper and created a new hotel, nightclub and luxury grocery store.

Several miles away, amid sprawling medical campuses near Cleveland's border with suburban Cleveland Heights, the fund contributed $60 million in EB-5 investments to finance the Ahuja Medical Center and Seidman Cancer Center, two new state-of-the-art healthcare facilities serving Cleveland and patients from across the world. The project also created more than 5,500 jobs. Nearby, $26 million helped put together 30,000 square feet of retail and student apartment space near the campus of Case Western Reserve University.

More than $36 million in EB-5 funding went into Crocker Park, a 600,000-square-foot outdoor shopping mall in the Cleveland suburbs. The program provided $24 million to complete the second phase of Flats East Bank, the project to turn the desolate end of Cleveland's riverfront into an entertainment space. Two years after it opened, nearly all of 200 luxury apartments at the new portion of that project are occupied, illuminated at night by bold face red neon letters that project "East Bank Flats" across the river.

The retail spaces built into the new East Bank Flats have had mixed success since opening in 2014. Within a year of opening, three of eight restaurants in the complex closed.

While the Cleveland International Fund says it has met all of its job fulfillments required under the EB-5 program and has satisfied its investors, legal problems and fraud charges involving centers in other states have cause some Chinese immigrants to find their own way.

Ming Song spent time during his career as a computer scientist in Beijing visiting the US. He decided years ago that he wanted to move here with his wife and daughter, but was wary of the regional centers, which operate independently of investors.

"With the regional centers, you have no control," Song said from his home in Seattle.

Instead of turning to the EB-5 program with his money, Song bought a Chinese restaurant in Dayton, Ohio, renovated it and added enough jobs to satisfy US authorities. "I invested for only one reason, I want to get the immigrant visa," Song said.

Going the independent route wasn't easy. It took Song nearly five years to complete the paperwork. He had the assistance of Roxi Liming, a Columbus, Ohio, attorney who specializes in securing EB-5 visas.