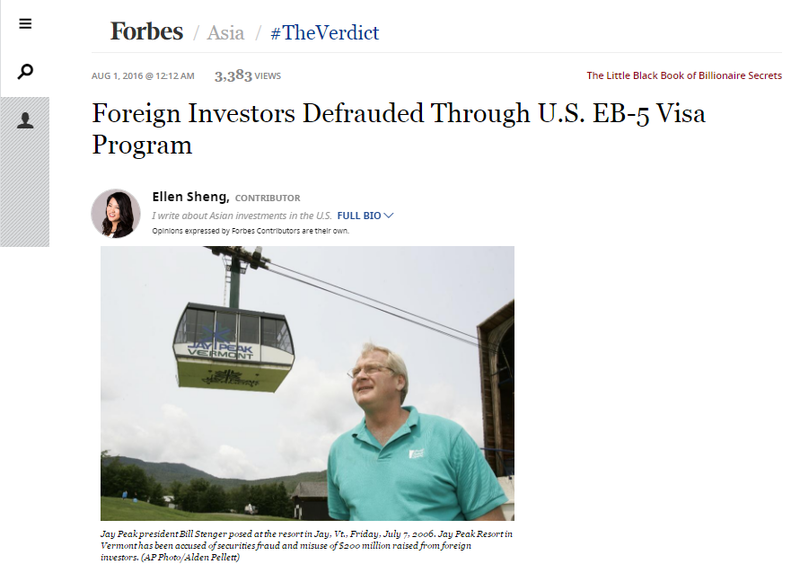 It seems like a win-win. Foreign investors put in much-needed capital to develop projects and create jobs in the U.S., earning a green card in the process. For many it is a winning proposition, but for others the EB-5 program has led investors to ponzi schemes, broken promises and missing capital.

Increasingly, foreign investors are fighting back. Some very successful projects have come out of EB-5 investments – Hudson Yards in Manhattan is a fine example – several high profile fraud cases that are playing out in courts now highlighting weak oversight of the program.

The EB-5 is a controversial federal program grants green cards to “alien entrepreneurs” provided they invest a minimum $500,000 in a U.S. commercial enterprise that creates at least 10 jobs.

The most followed EB-5 fraud case is Jay Peak Resort in Vermont, which has been accused of securities fraud and misuse of more than $200 million raised from investors. The Securities and Exchange Commission earlier this year filed a civil lawsuit against Jay Peak alleging that the owner and chief executive of the resort “systematically looted” more than $50 million from foreign investors in a “massive eight-year fraudulent scheme.” The Jay Peak case now has several class action suits involving hundreds of investors.

“Jay Peak was one of the original grandfather regional centers that was a very vocal proponent of the program. For this to happen, it’s kind of a black eye,” said Samuel Newbold, attorney at Barst Mukamal & Kleiner in New York, which is representing some investors in the Jay Peak case.

Other cases currently in court include one in Seattle in which a local developer who raised $125 million from foreign investors has been accused of taking $17.6 million for his own personal use. In Los Angeles, the SEC filed civil fraud charges against a doctor turned developer and his associate who are accused of misspending more than $10 million meant to build a nursing home.

Last year in South Dakota, a group of 35 Chinese investors came together to sue the state of South Dakota as well as Joop Bollen, a former official who ran the EB-5 program, for $18.5 million.

And in a twist, Korean investors sued Justin Moongyu Lee, a Los Angeles-based money manager and his firm for fraud, then also sued Lee’s bank, Wilshire Bank. Although Wilshire Bank was not involved in the EB-5 project directly, the investors said the bank was complicit in the scam and should have done something to prevent Lee from defrauding them. The plaintiffs are suing for fraud, negligence and breach of contract.

“There are people now calling for a moratorium or just stop [the program] altogether because of fraud,” said Newbold.

Since its introduction in 1992, the EB-5 has become the most popular residency program in the world, issuing a maximum 10,000 green cards a year. About 90% of applications are from China. With roughly one third of the 10,000 annual green cards issued to investors (others are issued to their family members), that means the program raises about $1.67 billion a year.

The USCIS estimates that at least $8.7 billion has been invested in the U.S. economy and an estimated 35,150 jobs created through the EB-5 program since 2012.

Though it’s been around a while, the EB-5 program really only gained popularity after the financial crisis when it became hard for businesses to get traditional bank financing. Since then, the number of regional centers – U.S. endorsed centers that sponsor EB-5 investment projects – has mushroomed. There were 867 regional centers as of July 5, according to the U.S. Citizenship and Immigration Services, up from 588 at the end of fiscal year 2014 and 11 at the end of 2007.

“As you have more and more regional centers coming online, we’re seeing more and more frequently centers that are not fully complying,” said Reaz Jafri, partner at Withers, a law firm focused on the high net worth individuals.

As with any investment, there are risks. But as a new fairly new program, the EB-5 is not particularly favorable to its foreign investors. Regional centers, though approved by the government, are not endorsed.

“The fact that a business is designated as a regional center by USCIS does not mean that USCIS, the SEC, or any other government agency has approved the investments offered by the business, or has otherwise expressed a view on the quality of the investment,” the SEC has said in a statement.

Nor are regional centers guaranteed to be in compliance with U.S. securities laws. Making it even riskier, EB-5 investors are typically in a 2nd or 3rd subordinate lien, meaning senior lenders (not EB-5 investors) have almost all the rights to any remaining assets.

That means in most EB-5 cases, EB-5 investors essentially have no recourse because usually, there are no assets for investors to go after, explained Newbold.

The Jay Peak case is unique because there are assets left. Plaintiffs are also seeking damages from wealth manager Raymond James Financial, alleging direct misappropriation of the investors’ funds by the fund manager.

“The number of regional centers has increased a lot and it’s not vetted by the government. It’s not like Moody’s can do an analysis and a rating based on public information. In theory it’s a wonderful concept. But for people who are not playing by the rules, it’s a buyer beware kind of scenario,” Jafri said.

There’s been enough concern about fraud that various government agencies are stepping up.

To improve oversight of the program, and better detect fraud, the USCIS did some restructuring and also doubled the fraud detection and national security EB-5 staff last year. It also expanded its random site visit program and removed regional centers that no longer meet requirements. The SEC has also been pursuing action, filing fraud charges in several cases involving EB-5 investments in the past year.

More changes should be coming, but not until after the presidential election. Lawmakers have been proposing an overhaul of the program, but because it is part of an omnibus spending bill, changes to the EB-5 program tend to fall by the wayside.

Meanwhile, there are more EB-5 applications than ever keeping agencies extremely busy. There are now 22,000 individual investors petitions pending with the USCIS. Applications came pouring in last September amid fear that some proposed changes – including a higher investment threshold – would be put into place.

“Probably 80% to 90% of these EB-5 investments do get approved but 10% don’t and that’s a significant number. From the point of view of developers, there’s no guarantee of return to the investor and no banks involved. It’s free money,” Withers’ Jafri said.