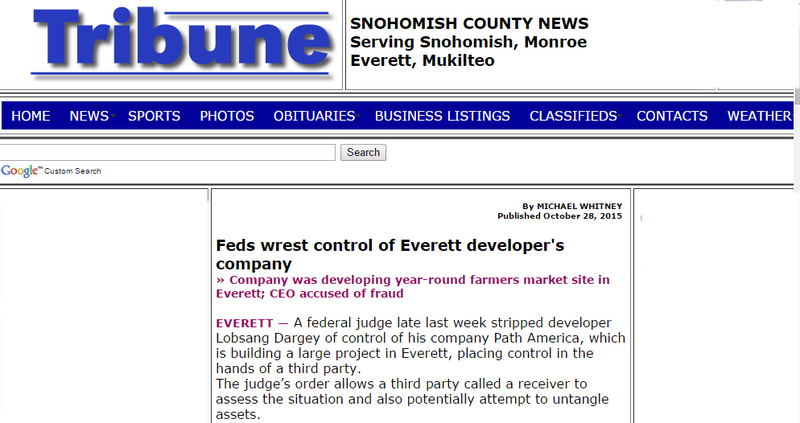 A federal judge late last week stripped developer Lobsang Dargey of control of his company Path America, which is building a large project in Everett, placing control in the hands of a third party.

The judge’s order allows a third party called a receiver to assess the situation and also potentially attempt to untangle assets.

Path America is building the Potala Place apartment-and-retail high rise in Everett at the corner of Rucker and Grand avenues as well as a prominent 40-story tower in Seattle.

Dargey, once a darling in Everett, faces fraud accusations by the U.S. Securities and Exchange Commission (SEC) of misappropriating $17.6 million Path America raised from primarily Chinese investors toward projects such as Potala Place in Everett. The money came through the EB-5 VISA program, which is a program aimed to let foreign investors give U.S. projects large amounts of cash in exchange for green cards.

The SEC filed its lawsuit Aug. 25 alleging that Dargey and his network of companies misappropriated approximately $17.6 million in foreign investment funds intended for the Everett and Seattle tower projects and sending the money to other projects not qualified for foreign investments, such as his Potala Village Kirkland project. The SEC also says Dargey misappropriated $2.5 million to buy a luxury home in Bellevue and also withdrew thousands of dollars worth of investors’ money at casinos.

The SEC’s filing shows that most of the misappropriated money was sapped out of the funds for his Potala Tower high rise project in Seattle.

The Seattle Times reported the judge’s order does not affect Dargey’s control of the year-round farmers market inside the Everett project — a company Dargey has a hand in called Potala Farms.

The receiver is Michael Grassmueck of Portland, who is a founder of The Grassmueck Group. His company handles corporate insolvency and bankruptcy trustee work in Washington and Oregon, and has worked repeatedly with the SEC as a receivership.